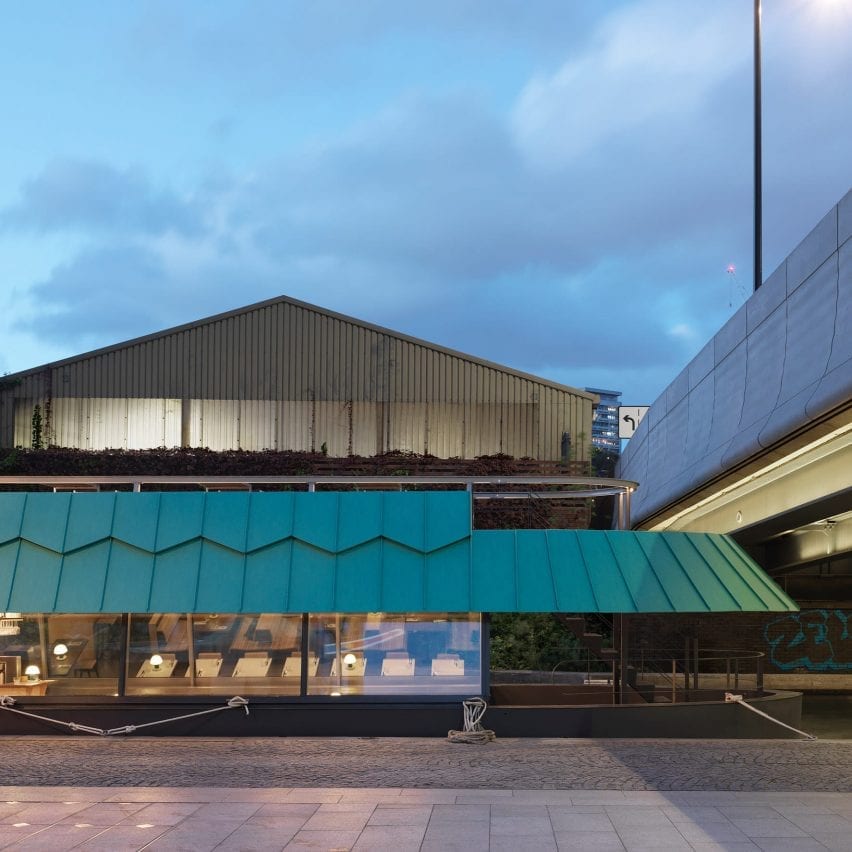 Permanently moored in Paddington, the barge was commissioned by British Land as the home for The Cheese Bar restaurant.

The Cheese Barge was built by Adam Richards Architects after a competition was held by the developer.

“The barge creates a festive and sophisticated environment, whilst drawing on the heritage of narrow-boat design and local social history.”

The restaurant was built within a 20-metre-long boat and has a rooftop deck above it.

The exterior of the barge is characterised by its patinated copper-clad roof that wraps around the boat, referencing blue tarpaulin covers that are typically used to conceal goods on working canal boats.

Its roof terrace is enveloped within a steel balustrade that is fitted to a section of the patinated roof. When needed this element can be de-mounted allowing the boat to pass under bridges and through tunnels.

“We were interested in canal boats, which were typically open barges that used tarpaulin to protect what is on there,” Richards explained. “The green cowl is a formalisation of the tarpaulin.”

“A zigzag runs around the roof, which partly came from a building designed by Otto Wagner on the Danube canal that used ornament to speak of the function of the building. It’s a visual cue to do with waves a water.”

From within the restaurant, the underside of the patinated roof is visible and provides a warm copper hue to the interior.

Glazed panels encase the restaurant allowing diners to see out to the canal and towpath, while also providing passers-by with glimpses of the interior.

“The fact that it was British-made by real craftsmen and designed by some of the best British architects appealed to our continued efforts to support British industry,” said The Cheese Bar founder Matthew Carver.

“We’ve always set out to create fun restaurant experiences, and what could be more fun than eating the best of British cheese on the Grand Union Canal.”

Adam Richards Architects was founded in 2002 and recently completed an education centre on the grounds of a 16th-century castle in Kent. Richards modelled his own home on the ruins of a Roman villa.

Photography is by Brotherton Lock.