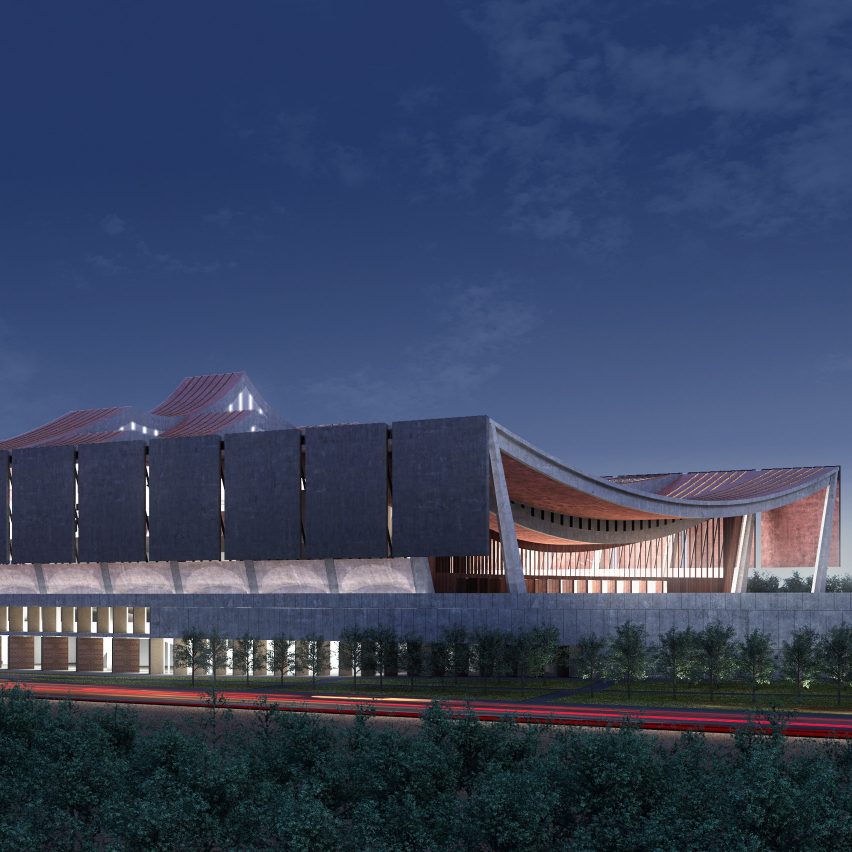 Members of parliament in Ghana have accused the president of illegally hiring David Adjaye‘s studio to design the National Cathedral of Ghana in Accra and are asking for the studio to return its fees.

The members of parliament (MPs) from Ghana’s opposition National Democratic Congress party have said that Adjaye’s eponymous studio, Adjaye Associates, was “sole-sourced” for the project. It also accused the New Patriotic Party-led parliament of unjustly using state money to pay for its design work.

Commissioned by Ghana’s president Nana Akufo-Addo, who is the leader of the New Patriotic Party, the multi-faith temple is currently under construction alongside the country’s Parliament House.

In response to the accusations, the National Cathedral of Ghana and the office of president Akufo-Addo issued a joint statement saying the project has been carried out “within legal procurement practices”. Adjaye Associates declined to comment.

At the forefront of those raising questions about Adjaye’s involvement in the scheme is Sam Okudzeto Ablakwa, an MP for Ghana’s North Tongu District.

Ablakwa alleges that the Ghana president gave Adjaye Associates’ studio the contract “without recourse to public procurement law” and without an open competition, according to GhanaWeb.

Neither the National Cathedral of Ghana nor the office of the president have commented on these claims.

Ablakwa claims that these fees were never formally approved by the governing body because he believes the contract was awarded without proper recourse to public procurement law.

However, in the statement shared by the National Cathedral of Ghana and the president’s office, it is stated that the budget of state money spent was approved by parliament and covered seed money, the appointment of the architect and the design team, preparing the land and setting up the secretariat.

It is also understood that Adjaye Associates was appointed on fees worth 10.5 per cent of the overall project cost, which is six per cent lower than the locally recommended fee rates.

Ablakwa added that if his party, the National Democratic Congress, wins the country’s 2024 election for president and national assembly then he would require Adjaye Associates to return its fees.

Another opposition MP, Ernest Norgbey, has said he would attempt to sue the government over the sole-sourcing of Adjaye Associates if the party wins the next election.

Adjaye Associate’s design for the cathedral includes a 5,000-seat auditorium and a museum, alongside gardens and a crypt. These will be sheltered by an ascending series of dramatic pitched roofs.

The project is now running a fundraising programme through the National Cathedral of Ghana Secretariat.

“The president, in introducing the National Cathedral indicated that although it was a National Monument, he is determined that its building would not put undue financial burdens on the state,” read the statement.

According to UK publication the Architects’ Journal, the project was originally expected to cost £180 million. Though these costs are now believed to have risen, prompting construction to come to a halt in March of this year.

The National Cathedral of Ghana Secretariat has explained construction “stalled for the time being due to the vagaries of the fundraising” but that it “should restart soon”. Opposition MP Ablakwa also accuses Adjaye’s studio of only becoming legally allowed to practice in Ghana in April 2022, when he was inducted to the Ghana Institute of Architects (GIA).

However, it is understood that his studio was legally registered to work as a foreign architect from 2018 to 2021 before it moved on to the registry of local architects in 2022.

Adjaye Associates was founded by internationally acclaimed architect Adjaye in 2000. It opened its own office in the city following the commission, adding to its existing bases in London and New York. Adjaye was awarded the RIBA Gold Medal in 2021, with Ghana’s president Akufo-Addo seaking of their friendship at the prize-giving ceremony.

“He was the architect I selected to do the design and he’s done a design that, God willing, when we’re able to finish it, is going to be truly iconic,” Akufo-Addo said at the time.

Elsewhere in Ghana, Adjaye Associates is currently developing over 100 hospitals as part of the country’s Agenda 111 program.