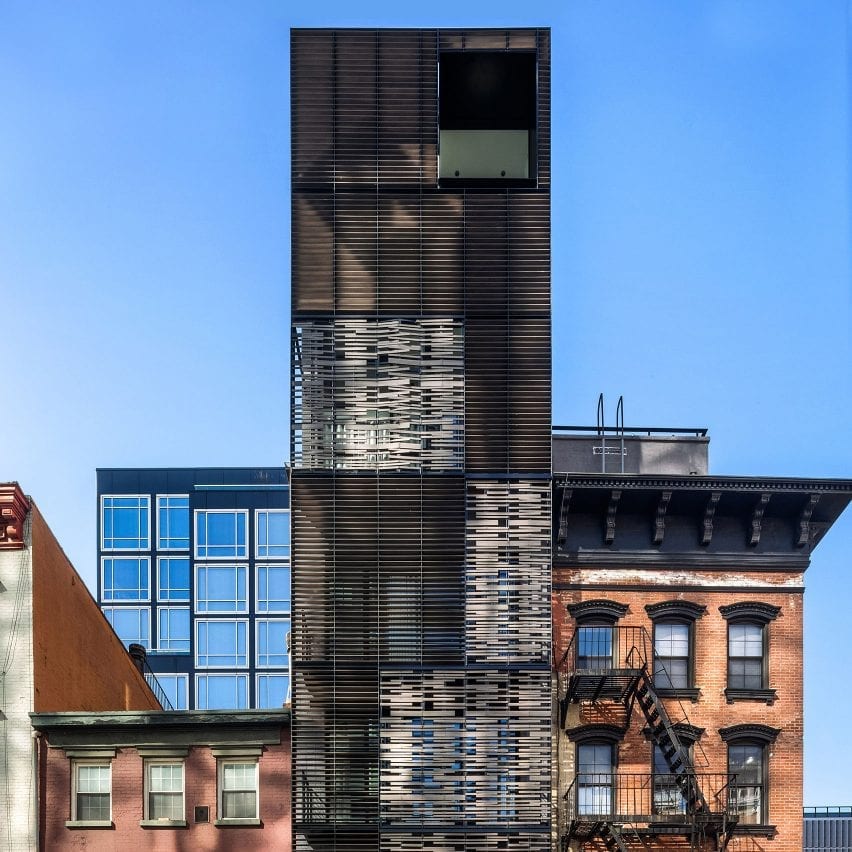 New York City studio Archi-Tectonics has added three storeys and a skin of folding slats to a home in SoHo.

The 512GW Townhouse was doubled in size with the extension by Archi-Tectonics, which built on the narrow structure’s original four storeys to create eight levels for a family to occupy.

To unify the original building and the addition, the team created a three-dimensional envelope that they describe as a “climate skin”.

This facade system comprises a lattice of lightweight steel, and Trespa panels made from resin and reinforcing wood fibres that are manufactured under high pressure and at high temperatures.

When the panels are closed, they form a continuous surface across the street-facing exterior that is oriented south. But when opened, they fold and unfurl like “feathers of a bird wing” to adjust ventilation, light, shade, and temperature.

“Like an intricate lacework dress, the sheathing changes character and appearance at different times of the day and view angles, and serves as both filter and amplifier between the privacy of the house and the public streetscape,” said Archi-Tectonics.

Environmental benefits of the cladding include reducing interior radiation and lowering the need for air-conditioning during summer, and the opposite through the colder months, according to the firm.

Inside, elements of the building’s former industrial past are retained, such as the restored exposed brickwork.

Also borrowing from the original structure, black steel is used throughout – most prominently for the staircase that doglegs up the building to connect all of its floors, which are also accessible by elevator.

A skylight above the stair flights allows light to filter down through the open treads and onto the landings at the back of the building, where all the circulation is located.

Habitable spaces are positioned at the front, starting with a cellar for storage. The entrance to the home is at street level, where a reception space welcomes guests and an opening brings natural light down to the basement.

The upper three floors are occupied by a bedroom on each, with ancillary spaces like dressing rooms, bathrooms and office areas complete the plans.

“To enhance the building’s small floorplates spatially, each floor contains a program connected through double-height voids, such as between the kitchen and dining area, and between the study and master bedroom,” said Archi-Tectonics.

“These allow for spatial interlacing and long views throughout.”

Finally, the shaded roof terrace is equipped with a BBQ, a sink and food preparation counters.

Built-in wooden benches form a lounging nook and a dining area with matching tables, all surrounded by planting.

“This Urban townhouse represents an innovative approach to densification in a city challenged by housing shortages and skyrocketing prices,” the firm added.

“The conversion not only provides residents with a diversity of elegant living, working spaces and generous outdoor areas, but also respects the existing characteristics of the city and poses a potential future for urban living.”

Based in NYC’s Financial District, Archi-Tectonics was founded in 1994 by Winka Dubbeldam, who is included on Dezeen’s list of women architects and designers you should know published in 2021.