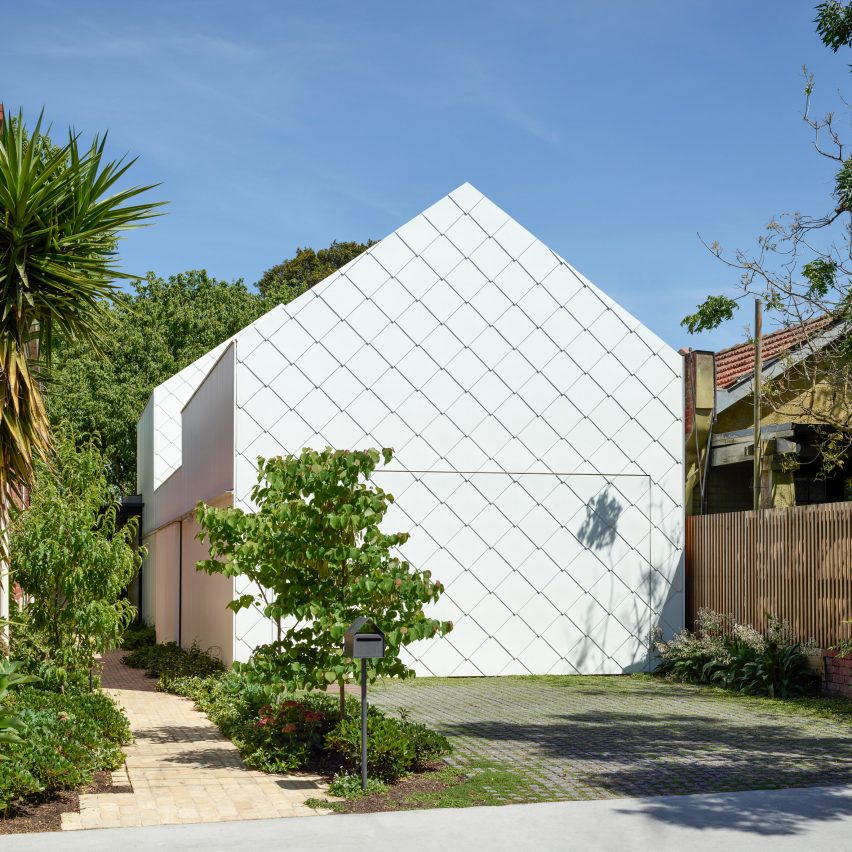 Australian studio Austin Maynard Architects has designed a multi-volume, family home in Melbourne that produces its own energy and has a white-shingled facade.

Named Garden House, the home on a narrow residential street in the inner-city suburb of Prahran, Melbourne, replaces an existing single-fronted cottage.

Austin Maynard Architects designed a sustainable four-bedroom family home that is largely hidden from the street and produces an average of 100 kilowatt hours of energy a day.

“More than just a house, Garden House is a power station, pushing far more sustainable energy back into our shared energy grid than it uses,” said Austin Maynards Architects.

“The home was designed to feel natural and connected to nature with the use of materials, whilst still being hi-tech and high performing.”

The only part of the home visible from the street is a pitched roof garage clad in white shingles that appears to be a modest dwelling.

However, the main home is accessed along a brick passageway beside this garage and is positioned behind the neighbouring homes on the large L-shaped plot.

“Garden House belies its size and scale,” Austin Maynards Architects. At street-view, the simple and domestic scale garage appears to be the house, in its entirety,” it continued.

“Walk down the side pedestrian alleyway and the main front door opens up to reveal a much bigger property concealed within – like discovering Narnia at the end of a literal yellow brick road.”

To reduce the scale of the home it was broken up into four blocks “invisibly” connected by mirrored glass corridors to reflect the lush gardens and give the illusion of separate buildings set within the greenery.

“They didn’t want the feeling of a big house,” the studio explained.

“Instead, the bulk of the home is broken up into four distinct elements appearing as separate buildings, invisibly connected via mirrored glass corridors that reflect the deep-rooted garden.”

The rear of the garage block contains a seating area overlooking the garden with an office above.

In the main house, the largest volume contains a kitchen and dining area attached to an open plan living-dining space that opens up onto the garden and heated pool.

Austin Maynard Architects used natural materials throughout the living spaces, which have glazed walls and bi-fold doors, with the aim of visually extending the garden into the living space.

The primary bedroom is located above the living space and has an ensuite and a large lounge terrace.

While the three children’s bedrooms are accessed via a corridor that leads to a separate volume of the building containing play spaces and a TV room.

Although Garden House was designed as a self-powered house the client did not want it to be filled with complex gadgets and technology systems.

It uses an entirely electric power system that is generated from a solar panel array on its roof. The array generates an average of 100 kilowatt hours of electricity per day that is stored within two Tesla Powerwall batteries.

The home contains a 10,000-litre water tank store which is positioned under a concrete slab in the garage, while harvested water collected from rainfall is used to flush the home’s toilets as well as for garden irrigation.

The studio positioned the home on the southern side of the site so that the interior is able to maximise warming potential from the sun.

Glazed walls and concrete floors in the living space help to passively heat the home during the winter months. Its concrete slab will absorb heat from the sun and redistribute it throughout the day.

Other homes with an eco-friendly focus include this cabin in Chile that was designed to operate off-grid, this wood-lined holiday home in Tasmania by Maguire + Devlin and this 3.3 metre home in a South African nature reserve that also runs off-grid.

Photography is by Derek Swalwell.