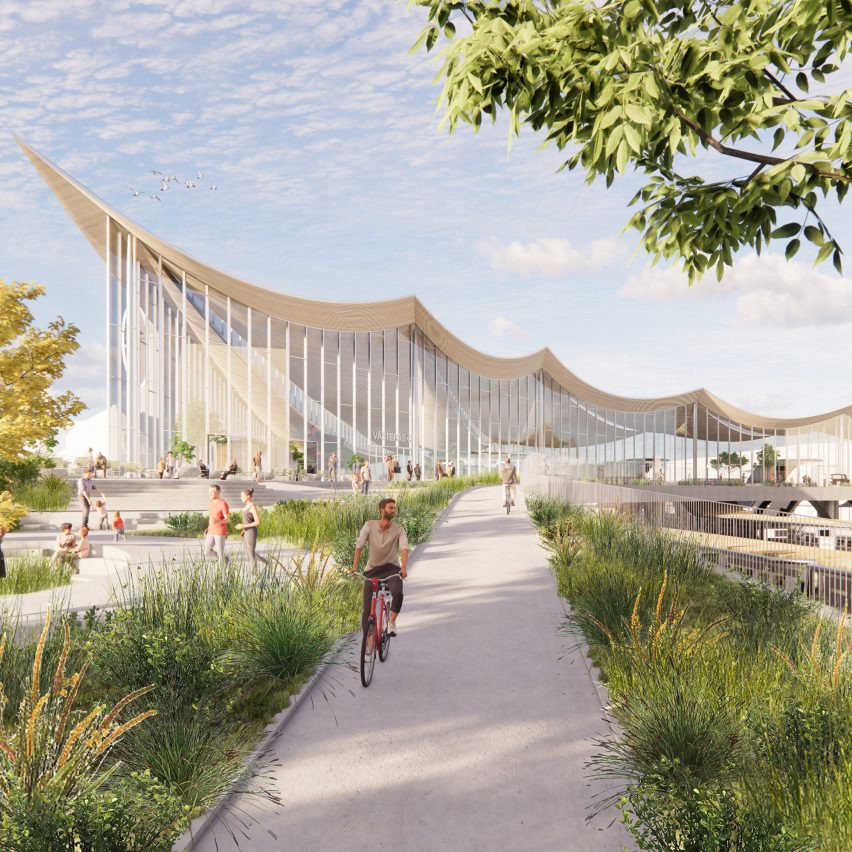 Architecture firm BIG has updated its plans for a transport hub designed for Swedish city Västerås, which will feature a building with a dramatically sweeping roof.

BIG envisions the Västerås Travel Center as a hub that brings together all of the city’s transport infrastructure under one roof and in one continuous landscape.

The building will serve as the central station for trains and buses while providing a bridge between the city centre and the nearby Lake Mälaren — areas currently divided by train tracks.

BIG first revealed a preliminary plan for the site in 2015. Key to the updated design is a more distinctive, flowing roof that extends beyond the edges of the 17,000-square-metre building to invite people in from multiple points.

The shape is similar to a billowing sail or a sheet attached to a line at multiple points.

“It is a roof that spreads out, invites from all directions, and creates spatial contexts,” said BIG.

The billowing effect will be even more prominent inside the building. Here, a zigzag line cut in the roof will give the ceiling a draped look even though it is clad in solid, smoothly curved timber slats.

The zigzag is also an important structural element, eliminating the need for interior pillars that would obstruct people’s movement.

The Västerås Travel Center will be wrapped in a curved, glazed facade that increases the connection between indoors and outdoors.

The hub is currently under construction in Västerås, a city just west of Stockholm that was the birthplace of multinational clothing retailer H&M.

BIG’s current transport projects include work with Virgin Hyperloop, including on a centre for testing and certifying the high-speed transportation system in West Virginia.

Work also recently completed on one of its skyscrapers in New York, The Smile, which has a curved facade.