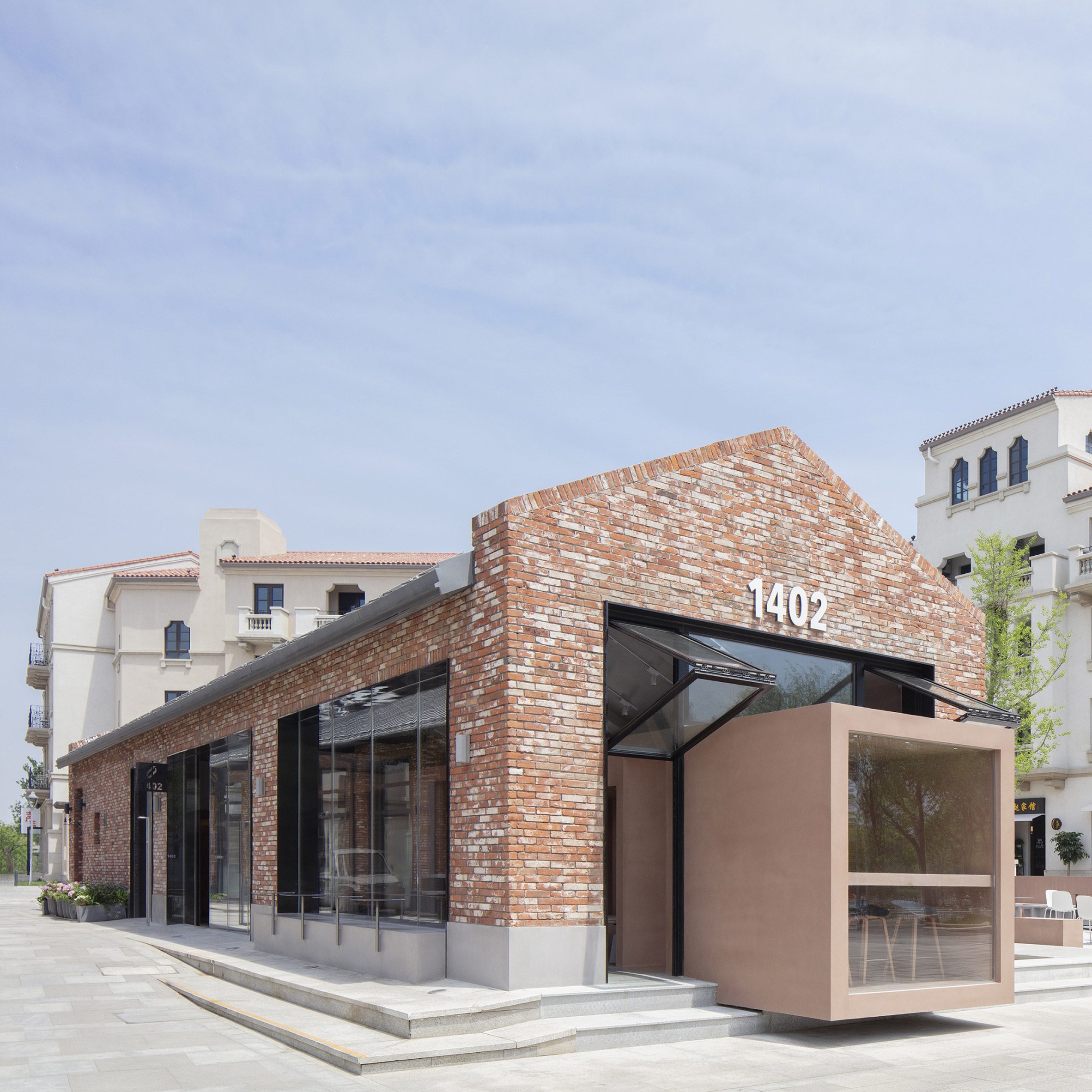 Beijing-based BLUE Architecture Studio has inserted a rectangular volume down the middle of an existing building in China to form a cafe that juxtaposes old and new.

1402 Coffee Shop is a cafe in the Aranya community, which is located in Changli County in China’s Hebei Province.

BLUE Architecture Studio renovated an existing one-storey red brick building with a sloped roof by adding a boxy rectangular volume to the inside of the building, which forms the coffee shop.

The volume is flanked by large glass windows, which include folding sections that open out at each end and connect the interior to its surroundings.

“We wanted to create a new space in the existing space,” BLUE told Dezeen. “Part of the new box comes out of the existing facade and becomes the attraction of the cafe.”

According to BLUE, the studio’s design process involved working out how to combine the necessary functions of the cafe into the rectangular volume, such as a seating area, a bar and a kitchen.

“The indoor corridor is like small lanes of a city with benches on each side,” said the studio. “You can sit on the couch, buy coffee at the bar, browse small products and chat with the coffee makers.”

“It’s very much like taking a casual walk on a little street. We want the interior to be an extension of the Aranya community. Streets and a nearby square are all visible from inside the cafe through big folding glass windows,” continued BLUE.

Dagu cement, a traditional Chinese material, was used to form the rectangular volume, which complements the light grey exposed aggregate concrete floors that surround it.

Solid oak is the primary material in the cafe’s interior, while stainless steel seats are scattered around the outdoor area, which was also designed as part of the project.

Made up of four sections, this seating area includes large planters that are positioned between minimal blocky tables and bars, which enhance 1402’s more contemporary elements.

BLUE explained that the aim of the coffee shop is not to merge old and new architecture together. Rather, the studio hopes that the project highlights differences between the rectangular volume and the existing red brick building, which was built between five and six years ago.

“We created the rectangular volume in an abstract form to contrast with the building’s existing sloped roof,” said the studio.

Despite these contrasts, BLUE sought to blend the coffee shop with the appearance of the Aranya community by choosing a neutral colour palette similar to the red brick structure.

BLUE Architecture Studio was founded in 2014 by Japanese architects Yoko Fujii and Shuhei Aoyama. Similar projects by the firm include the addition of a U-shaped glass box to a Shanghai coffee shop.

The photography is by Zhi Xia.