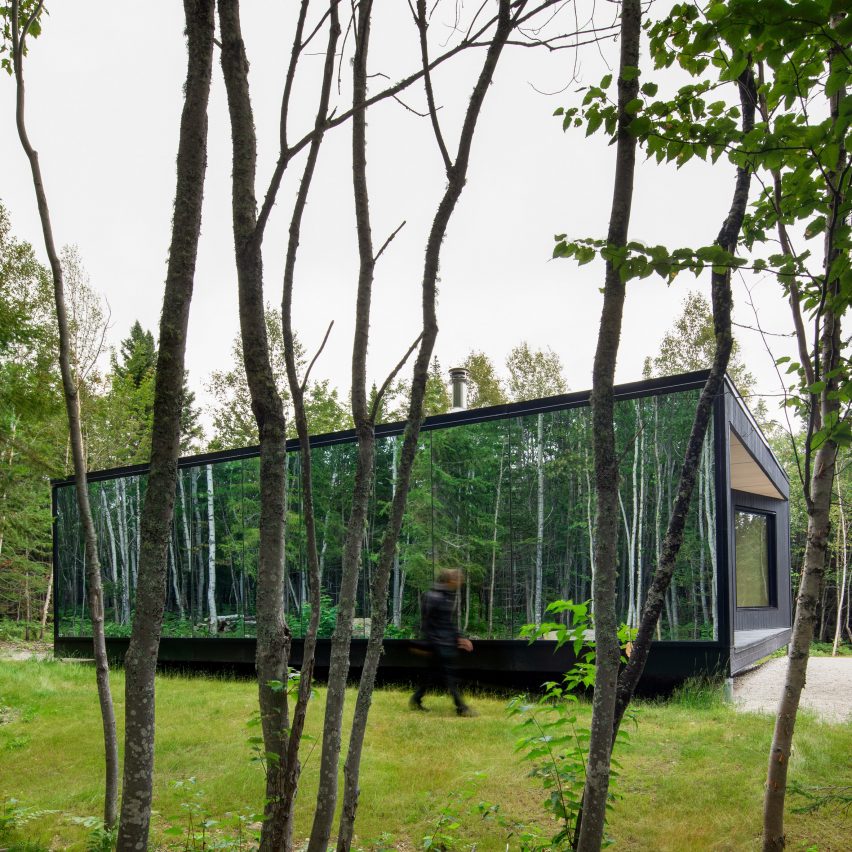 The pair of rentable Forest Glamp cabins were completed as part of hospitality concept Réflexion, and are located in Petite-Rivière-Saint-François – a popular ski destination roughly an hour outside Quebec City.

The project follows Bourgeois Lechasseur’s previous work on glamping or short-term rental projects in the region, and the studio sees this a continuation of the same type of work.

“The challenge for the architects was to engage guests in an intimate relationship with nature, rather than dazzle them with the overwhelming views nearby,” said Bourgeois Lechasseur. “Key to the design was a focus on creating accommodations that would almost disappear among the trees.”

Each of the structures contains two bedrooms, a bathroom, a kitchenette, and an open living and dining area with a fireplace.

In the communal area, a full-height glass wall runs the length of the building, providing unobstructed views of the surrounding forest.

When seen from outside, the reflective glass helps to blend building volumes with the trees.

To prevent confusing and injuring wildlife, the large panels have a coating that is invisible to the human eye, but that birds can see clearly.

In order to reduce construction timelines and improve build quality, each cabin was pre-fabricated offsite in two sections, and assembled together in the field.

“Two operations had to take place on location: the pouring of the radiant concrete slab, and installation of the long, reflective glass walls,” Bourgeois Lechasseur said.

Bourgeois Lechasseur aimed to create a contrast with the typical “rustic log cabins” that most people still associate with the Canadian wilderness. “Today’s travelers seek comfort and poetry,” the architects said.

Others include a home on the Magdalene Islands that takes cues from local traditional materials and a lakeside residence with stepped, stadium-style seating outside leading down to the water.

The photography is by Maxime Brouillet unless otherwise indicated.