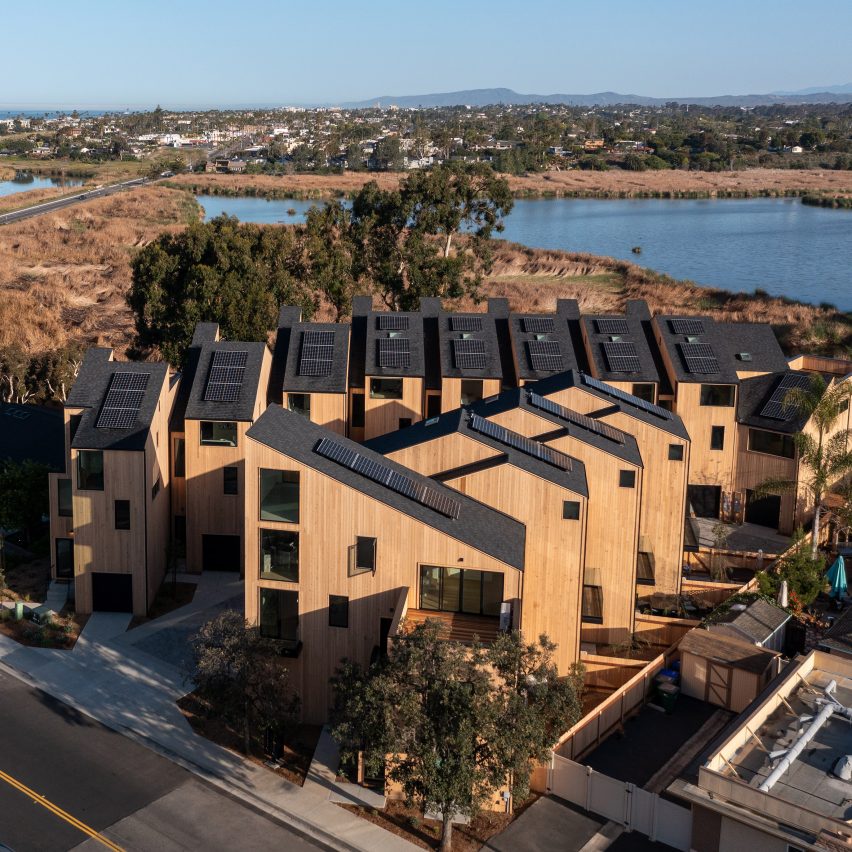 Cedar cladding and distinctive windows feature on the exterior of tall rowhouses that were designed, developed and constructed by California architect Brett Farrow.

Located in Carlsbad, a beach town north of San Diego, the Laguna Row Development sits between an ecological reserve and urban amenities such as shops and eateries.

Brett Farrow Architect – based in the nearby city of Cardiff-by-the-Sea – served as the architect, developer and builder of the 25,565-square-foot (2,375 square metres) project.

“This site presented a unique opportunity to offer a private life facing onto nature while also offering a very public, urban lifestyle with restaurants, mass transit and the beach all within walking distance,” said the studio.

“Upon visiting the site, the first impression was the surprise of the open space and vital natural beauty of the lagoon,” founder Brett Farrow said. “Instantly I felt transported to another place and time.”

For an irregularly shaped site, Farrow conceived 13 slender, detached homes that line a central auto court. Clad in western red cedar, the three-storey buildings are set at an angle to optimise privacy, sunlight and views.

The homes are rectangular in plan, but their form is more sculptural. Farrow referred to them as “chiseled geometries”, with angles and cutouts that create unexpected spaces and crisp shadows.

The homes are topped with pitched roofs in response to local zoning rules. The rule requires 5:12 sloped roofs, meaning a roof must rise five feet vertically for every 12 feet of horizontal distance.

All of the houses come with a redwood deck and a 12-foot-high (3.6-metre) garage with a lift, enabling the storage of two stacked cars.

Interior finishes include oak flooring and screens made of vertical-grain Douglas fir. The kitchen features quartz countertops and walnut cabinetry.

Carefully placed operable windows and sliding glass doors bring in daylight and sea breezes, resulting in little to no need for mechanical heating and cooling.

Passive cooling is among the many sustainable strategies that Farrow employed. Others include individual solar systems, all-electric appliances and native plantings in the landscape. 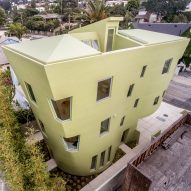 The project also helped improve the stormwater conditions and natural habitat on the site, which formerly held an office building, single-family residence and parking lot.

Farrow said that by serving as the architect, developer and builder, he was able to make decisions and do things in a way “that is not typical in most real estate developments”.

“This control of the process and the economic priorities were critical in creating housing that reflects its time and place,” he said.

Other projects by Brett Farrow include the conversion of a shabby auto shop in Carlsbad into a mixed-use complex for working, dining and drinking. The revamped building features cedar and steel cladding, large garage doors and an asymmetrical upper-storey addition.

The photography is by Auda & Auda Photography (exterior) and Tomografica (interior).