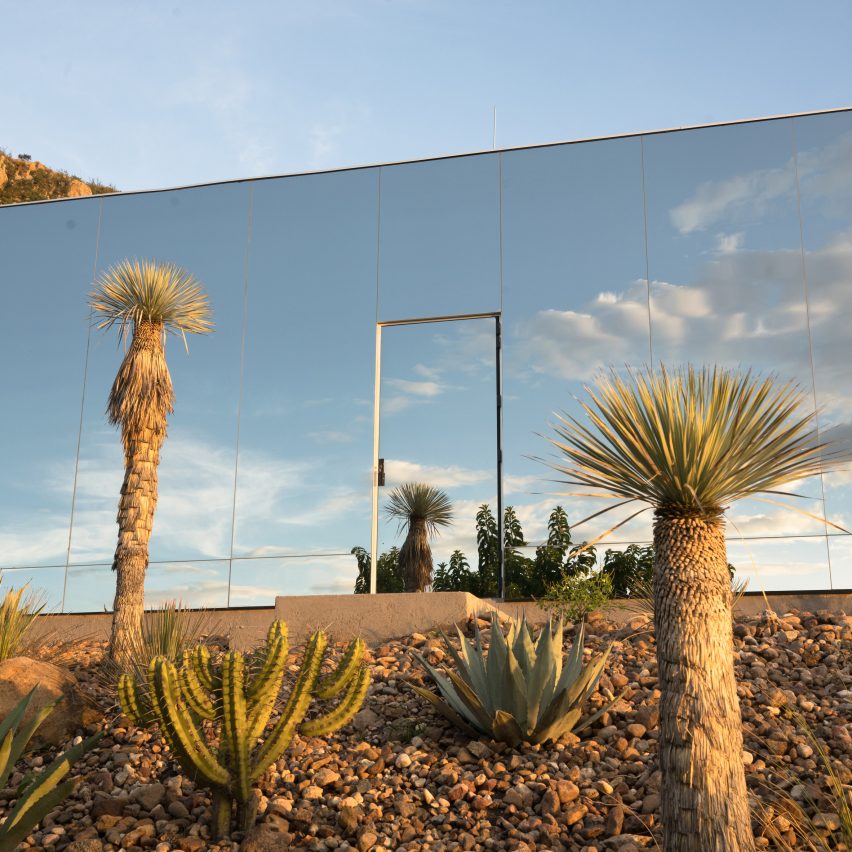 Solar panels and harvested rainwater power this mirrored holiday home by first-time architect Prashant Ashoka, which was designed to be self-sufficient and in harmony with its surroundings.

Casa Etérea is nestled into the slopes of an extinct volcano in the Los Picachos highlands, near the Mexican city of San Miguel de Allende, and surrounded by 10,000 hectares of rugged, unspoiled nature.

The structure of the 75-square-metre cabin was made from local materials, in line with Ashoka’s aim to design the retreat as if it was “birthed from the mountainside itself”.

Its foundations are formed from volcanic rocks collected on-site and its walls from bricks that were made locally and finished with micro-cement, before being clad in mirrors.

“While there is nothing new about the concept of mirrored buildings, Casa Etérea does something different by putting sustainability first,” Ashoka told Dezeen.

“I hold self-sustaining architecture in high reverence, especially in our time of climate crisis, and believe that off-grid homes represent our ultimate integration with the environment.”

The cabin is formed of two rectilinear volumes that meet to form a wide V-shape, framing an internal courtyard with a patio and a small swimming pool clad in mosaic tiles.

The side of the building that faces the Palo Huérfano volcano is finished with panoramic glass doors and designed by Ashoka to act like a “theatre to nature”, while the exterior facade that faces the valley beyond is completely shrouded in mirrored panels.

Beyond affording privacy to the guests, this allows the structure to act like a seamless extension of the environment, reflecting the changing light of the days and seasons.

“Light becomes a structural element of this design, distorting the perspective of where the observer begins and the landscape ends,” said the designer.

“I wanted this interplay of light and scale to evoke a deep sense of awe for the wild and to beg questions about our role as stewards in the preservation of our ecosystems.”

According to Ashoka, the design was informed by the idea of emotional architecture, which was coined by seminal Mexican architect Luis Barragán to describe a style of building that encourages quietude and introspection.

With the aim of leaving the surrounding nature largely undisturbed, a patterned, ultraviolet coating was applied to the mirrors, marking the structure out for passing birds to prevent collisions while remaining invisible to humans.

The cabin is solar-powered and harvests rainwater, and the orientation of the site itself helps to naturally regulate the indoor air temperature and conserve energy.

“By positioning the house to take in full morning light up until noon, the sun naturally heats the space,” Ashoka explained. “This heat is then trapped by double-glazed, insulated glass sliding doors keeping the temperature regulated throughout the day.”

A copper bathtub sits next to the bed and, like the rest of the bathroom area, is left entirely exposed to the views from the floor-to-ceiling windows.

Ashoka is originally a photographer and writer who emigrated from Singapore to Mexico in 2017. He built Casa Etérea over the course of three years, together with a team of six collaborators, despite having no background in architecture or design.

Mirror cladding is proving to be a popular choice among architects of remote retreats, who want the surrounding nature to remain unspoiled.

And in the US, designer Tomas Osinsk and film producer Chris Hanley worked together to create a mirrored house near Joshua Tree National Park that resembles a New York skyscraper laid on its side.

The post Casa Etérea is a mirrored off-grid cabin on the slopes of the Palo Huérfano volcano appeared first on Dezeen.