An otherwordly character explores the Chapel of Sound, a rock-like concert hall designed by Chinese studio Open Architecture, in this video informed by science fiction.

Nestled in a valley next to the ruins of the Great Wall of China outside Beijing, the project was completed in November last year.

“When I first saw the building, I immediately felt this is something from out of this planet,” Xia Zhi of Xia Zhi Pictures, the creator of the video, told Dezeen. “So I created the video with a science-fiction vibe, like the film of Prometheus.” 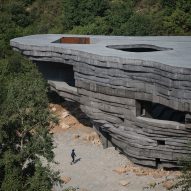 The video shows an extra-terrestrial-like character exploring the exterior and interior of the monolithic concert hall, which was built entirely from concrete and resembles a piece of natural rock that matches the surrounding landscape.

Chapel of Sound has an inverted cone shape created by a series of concrete layers, each of which cantilevers out from the previous layer.

Natural daylight comes in from the void in the centre of the rooftop, illuminating the interior space.

This project is longlisted in the cultural building category of this year’s Dezeen Awards.

Read more about Chapel of Sound ›

The post Chapel of Sound in China is given a "science-fiction vibe" in new video appeared first on Dezeen.