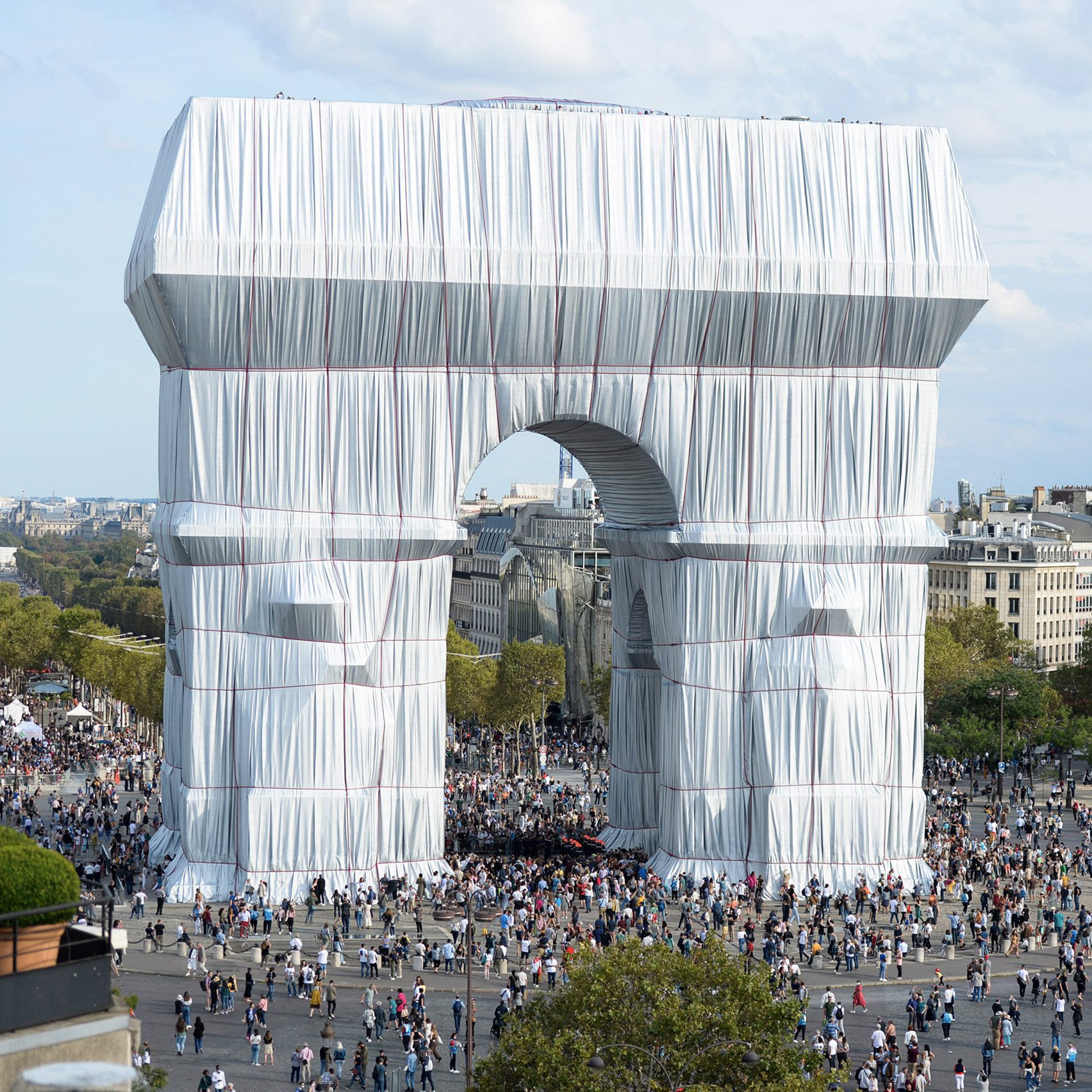 L’Arc de Triomphe Wrapped, an installation designed by the late artists Christo and Jeanne-Claude, has opened to the public in Paris.

The installation sees the iconic triumphal arch on the Champs-Élysées shrouded in 25,000 square metres of silvery, recyclable fabric, which is tied in place by 7,000 metres of red rope.

L’Arc de Triomphe Wrapped opened to the public on Saturday 18 September, following its postponement due to the coronavirus pandemic, and will be in place for 16 days.

As part of the installation, the large Place Charles de Gaulle road junction that surrounds the monument has been temporarily pedestrianised to allow people to see the installation and touch it freely.

Visitors can also observe the installation from the Arc de Triomphe’s terrace, which remains open alongside its interiors.

The huge quantities of fabric and ropes used in the installation have all been made from polypropylene, a type of thermoplastic that is recyclable.

Christo had previously said that these materials will also move in the wind and reflect light to evoke “a living object” so that “people will want to touch” it.

Commissioned by French ruler Napoléon Bonaparte following his victory at the Battle of Austerlitz in 1806, the 50-metre high triumphal arch was designed by French architect Jean Chalgrin.

Its construction was halted following Bonaparte’s fall from power, finally being completed in 1836.

According to project director Vladimir Yavachev, the installation fulfils the “life-long dream” of partners Christo and Jeanne-Claude, who were best known for wrapping famous buildings around the world.

The idea was conceptualised by the pair in 1961 but it was not until 2017 – eight years after the death of Jeanne-Claude – that Christo fully developed the design.

Due to the death of Christo in 2020, the installation was carried out by his team along with the Centre des Monuments Nationaux, Centre Pompidou and the City of Paris.

It was funded solely through the sale of original work by the duo, reflecting their unwavering mission to retain complete artistic freedom.

“I won’t give a millimetre of my freedom [away] and damage my art,” Christo told Dezeen in 2018 at the opening of The London Mastaba.

The London Mastaba, which was Christo’s final project, comprised a stack of 7,506 brightly coloured barrels placed on the Serpentine Lake in London.

At the opening, the artist also told Dezeen that “many people have difficulty reading our projects”, but said that “every interpretation is legitimate”.

Other key projects by the duo include Valley Curtain in Colorado and Surrounded Islands in Florida. The pair also famously covered the German Reichstag in Berlin with similar materials used in l’Arc de Triomphe Wrapped.

The Arc de Triomphe is due another makeover as part of a wider masterplan to convert the Champs-Élysées avenue into a pedestrian-friendly public space.

This will see pockets of greenery introduced around the monument and along the iconic 1.9-kilometre-long road.

The photography is courtesy of the Christo and Jeanne-Claude Foundation and taken by Benjamin Loyseau unless stated. The main image is by Wolfgang Volz.