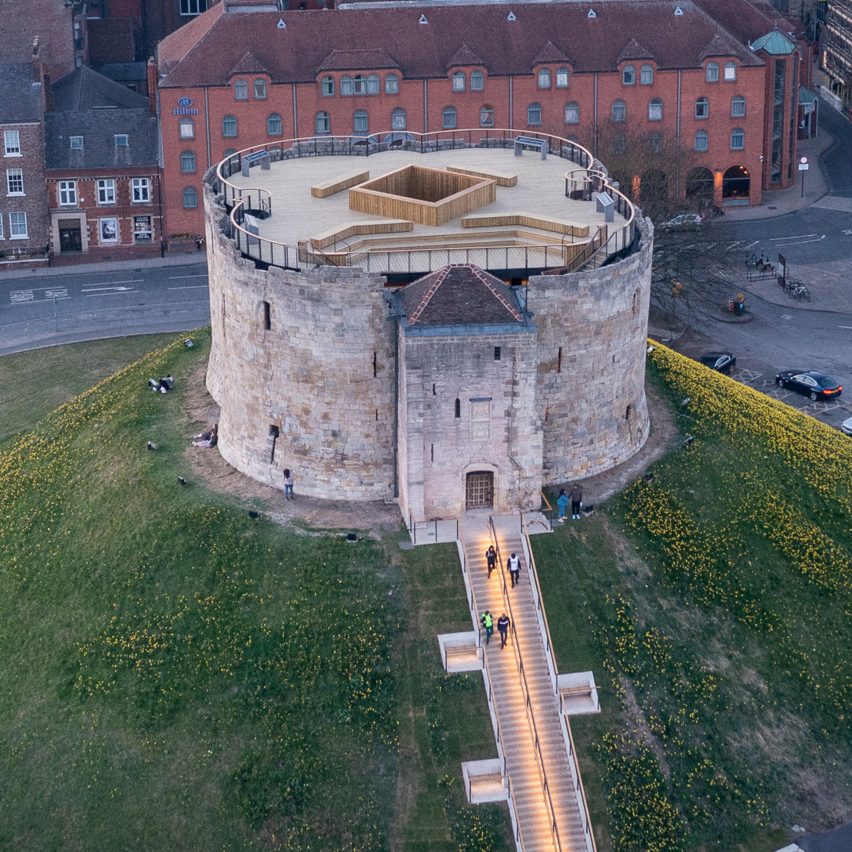 From the renovation of a major London landmark to a “treeless treehouse”, we select 10 of the most notable British architecture projects completed this year as part of our review of 2022.

This year’s roundup of UK architecture also features an intervention at an 800-year-old building, a rammed-earth yoga studio and a mammoth infrastructure project.

Read on for Dezeen’s top 10 UK architecture projects of 2022:

The building’s materials and form were designed as a nod to the college’s older buildings, with load-bearing brick elements, chimneys, timber floors and gabled roofs. RIBA president Simon Allford hailed the project as “the epitome of how to build for the long-term”.

Find out more about The New Library at Magdalene College ›

One of London’s most recognisable landmarks, Battersea Power Station finally reopened this year more than 40 years after being decommissioned.

Architecture studio WilkinsonEyre inserted shops, office space for tech giant Apple and 254 apartments into the former power plant, while Ralph Appelbaum Associates created an elevator viewpoint at the summit of one of the famous chimneys.

Find out more about the Battersea Power Station redevelopment ›

Forth Valley College Falkirk Campus, Falkirk, by Reiach and Hall

Built to replace a 1960s building deemed no longer fit for purpose, this 21,000-square-metre campus housing specialist teaching facilities is defined by its humble palette of pale brick, concrete and aluminium.

Reiach and Hall Architects described the project’s external appearance as “low key, reflecting the modesty of an institution that seeks to serve”.

Production studio Stephenson& made a short film about the college that was published on Dezeen.

Find out more about Forth Valley College Falkirk Campus ›

After a series of delays, the central section of the £18.8 billion Elizabeth line finally opened in London this year, representing the biggest expansion to the city’s underground railway network for more than a century.

In an interview with Dezeen head of architecture for the Elizabeth line Julian Robinson described the project’s designs as taking a “more mannered, a more rationalised approach”.

Find out more about the Elizabeth line ›

Clifford’s Tower has a bloody history reaching back to the year 1068, with the 13th-century stone keep gutted by fire in 1684.

Find out more about Clifford’s Tower ›

Red House, in rural Dorset, was designed to look like a child’s drawing of a house from the outside, albeit with unusual twists like the oversized eaves, patterned brickwork and vibrant green detailing.

The project was named House of the Year 2022 by RIBA, with the jury praising the way it “confronts our expectations of a house in a beautiful setting”.

“We’d like to think that our Red House is surprising, if not entirely shocking, to a contemporary audience,” David Kohn told Dezeen.

Find out more about Red House ›

Invisible Studio created a yoga studio with rammed-earth walls and a roof clad in copper shingles at The Newt in Somerset hotel in England.

Set within the hotel’s vegetable garden, the yoga studio has an insular design, with a single opening at the apex of its curving sculptural roof.

Find out more about the yoga studio at The Newt ›

This mixed-use scheme in Hackney combines a primary school with an 11-storey residential tower all in earthy-red concrete and brick, sitting above a base of commercial units fronted by a sturdy loggia.

Find out more about 333 Kingsland Road ›

Named after a character in classic children’s cartoon Danger Mouse, Penfold is a 4.1-metre-high playhouse created in the garden of a London home by architecture studio De Matos Ryan.

The pyramidal timber structure, dubbed a “treeless treehouse” by the architects”, is only accessible via a low crawlspace. Inside, two levels are connected by a timber and rope ladder and lit by an openable skylight at the pyramid’s apex that automatically closes when it rains.

Find out more about Penfold ›

The Den, Tighnabruaich, by Technique

Sitting on a hillside in the Scottish village of Tighnabruaich, The Den has a panoramic outlook over the Kyles of Bute, a narrow sea channel.

Find out more about The Den ›