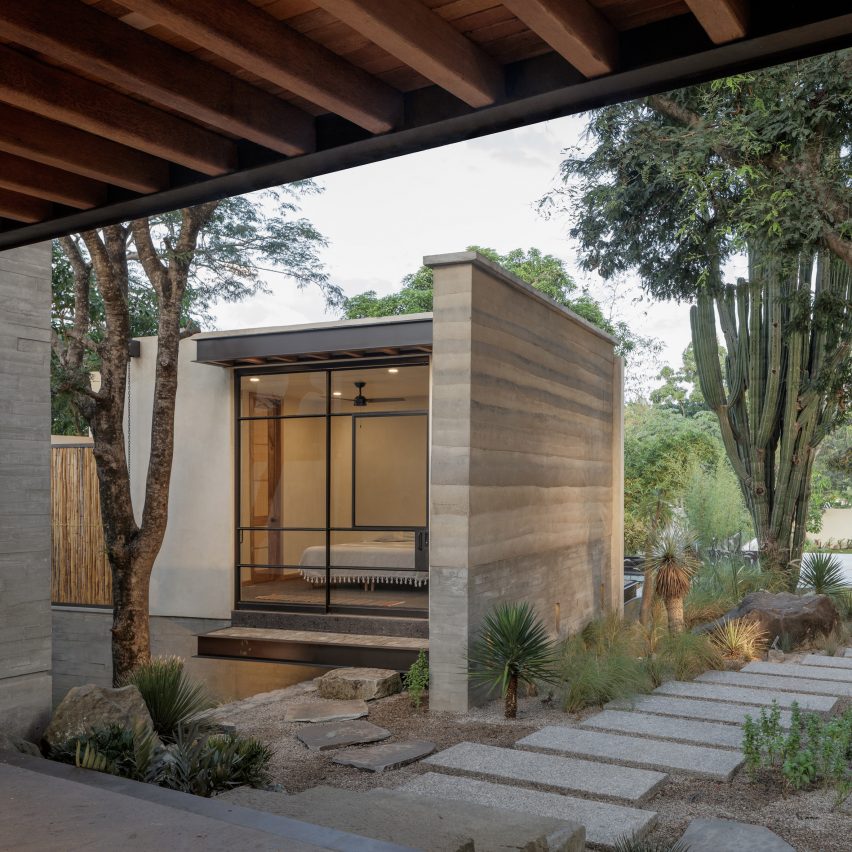 Di Frenna Arquitectos used natural materials such as stone, rammed earth, carrizo weaves and a traditional form of stucco to make Espacio Kaab in the Mexican city of Comala appear “as a volume that emerged organically from the ground”.

The project is located on a semi-arid site in Comala, a small town near Colima, the capital city of the eponymous Mexican province.

Di Frenna Arquitectos, a firm led by Matia Di Frenna Müller and based in Colima, completed the project in December 2021 using materials that directly reference the site.

“Some of these materials were sourced directly from Comala, most notably the rammed earth walls, which were formed using the ancient technique of compacting earth until it has the density and structural integrity of concrete,” the architecture studio said.

The design of the 400-square-metre home had to accommodate a variety of existing plants and trees on site, which led the architecture studio to create courtyards and openings throughout the home.

“Within and surrounding the property are primavera trees, parotas, tamarind trees and a magnificent view of the La Barragana river that all serve to welcome you into the characteristic sub-tropical climate of the region,” the studio added.

Guests park underneath an overhanging volume, then climb a flight of stone stairs to the main level of the house.

The partially sunken ground floor contains two guest bedrooms and bathrooms, and is accessed from within the home.

The first floor is the main level of the home and has a lush courtyard that leads visitors through the home and towards views of a nearby historic hacienda that once belonged to artist Alejandro Rangel Hidalgo.

The home is meant to honor the legacy of the artist – called Rangel – through its embrace of local craftsmanship.

“However, the space also transcends the original inspiration by marrying these traditional crafts and materials to new techniques and innovative structural solutions,” said the architecture studio.

Large openings on either side of the dining room give the impression of a continuous space between the interior and exterior spaces.

“The inhabitants can walk barefoot across the same natural stone floor, without distinguishing whether they’ve come out or into the house,” said Di Frenna Arquitectos.

Off to one side of the dining room is a painting studio. On the opposite side, the architects placed the kitchen and the living room, which has windows on two sides and opens out onto a wraparound porch protected by a projecting roof overhang.

Two additional bedrooms are housed within separate volumes in the courtyard, affording them more privacy and independence. The bathrooms are equipped with outdoor showers and soaking tubs, which are surrounded by foliage.

“In order to achieve a perception of the house as a volume that emerged organically from the ground, raw, natural tones form the primary palette of the project,” the architecture studio explained.

Local palm wood, river stone and ceilings of woven carrizo form the core elements of the house, along with “artisanal blacksmithing”.

Elsewhere, wooden beams form the ceilings, which the architecture studio said was a nod towards Japanese construction.

“Other trademark tones, such as the eggshell-colored chukum stucco that graces many of the house’s walls, are also the result of ancient construction techniques and materials native to Mexico,” it added.

The studio was founded in 2012 and is also responsible for a house perched atop a stone plinth, which was informed by a Mayan legend.

Other homes in Mexico include a glass-and-steel pavilion perched atop a concrete apartment building in Mexico City, and a house in the beach town of San Ignacio that was rearranged around a circular pool in the centre of its courtyard.

The photography is by Lorena Darquea.