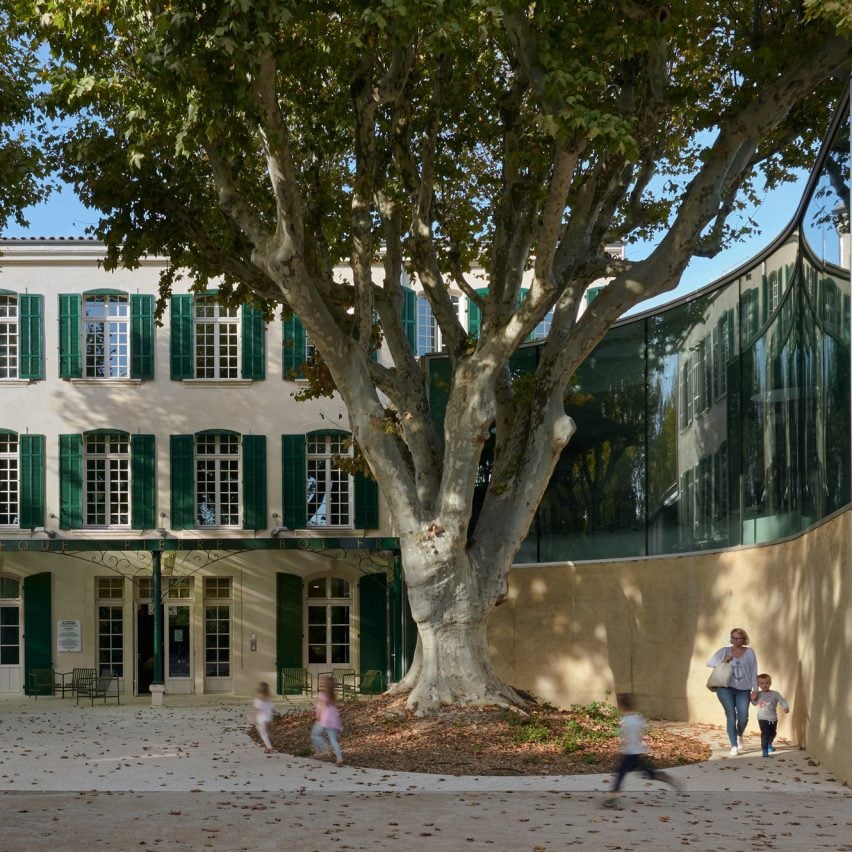 Dominique Coulon & Associés has converted a manor house in the French town of Pélissanne into a library with a glass-fronted extension that looks onto a leafy public park.

Located in the heart of the formerly fortified town in Provence, the Piero Bottero Media Library is named for a French fiction writer who spent most of his life in the region.

Dominique Coulon’s Strasbourg-based studio designed the library and media centre to occupy one of the town’s many historic buildings, the Maison Maureau, which connects with the adjacent public park.

“The positioning of the media library respects the integrity of the park and the house,” the studio explained.

“It sets up a dialogue between two eras, two dimensions, by opposing the verticality of the volume of the house with the horizontality of the extension.”

The 17th-century house was carefully preserved and adapted to fulfil its new function. The sequence of existing rooms is retained along with the connection through the building from the street on one side to the park on the other.

A double-height events space occupies an existing ground-floor room in the western part of the building, while the reception rooms in the eastern part have been restored and repurposed as meeting or reading rooms.

The extension adjoins the south side of the house and comprises two floors of versatile spaces including a reference library and reading areas.

Its glass facade curves around an existing plane tree and the staggered plan is slotted around the rear elevations of the neighbouring buildings. The result is a sequence of spaces that are connected but also separate and distinct in character.

Full-height glazing connects the extension’s ground floor spaces with the park outside. The main entrance opens into a reception that flows through to the children’s area and the adjoining multimedia space.

A wooden staircase leads up to the more enclosed and quiet first floor, which contains spaces for reading and study along with a media library and seating next to the curving glass wall.

“While the ground floor opens wide onto Maureau Park and allows readers to immerse themselves in the landscape, the first floor is closed off and more introverted,” said the studio.

“[This level] offers a completely different ambience by projecting the visitor into the branches of a majestic plane tree, whose presence is amplified by the building’s only curve.”

A smaller second floor in the upper part of the existing house contains offices, a tea room and the building’s technical services.

A deep shade of green was used throughout the refurbishment to link the building to the park and create cohesion across elements such as the window shutters, entrance canopy, bookshelves and other items of freestanding furniture.

In addition to the library project, the municipal authority also commissioned the studio to create a passageway between the park and the town hall that passes through an existing house.

The building’s floors and window were removed, leaving just an arched entrance that marks the route of the footpath.

As pedestrians pass through, they can look up to see an exposed beam and a roof that has been partly replaced with glass tiles to brighten the new thoroughfare.

Dominique Coulon & Associés is headed by architects Coulon and Steve Letho Duclos. The studio works across a variety of programmes, including cultural buildings, housing, schools and care facilities.

Previous examples of the firm’s restoration work include the conversion of a former distillery in the municipality of Schiltigheim into a covered market and the renovation and extension of a swimming pool in a Paris suburb.

Photography is by Eugeni Pons.