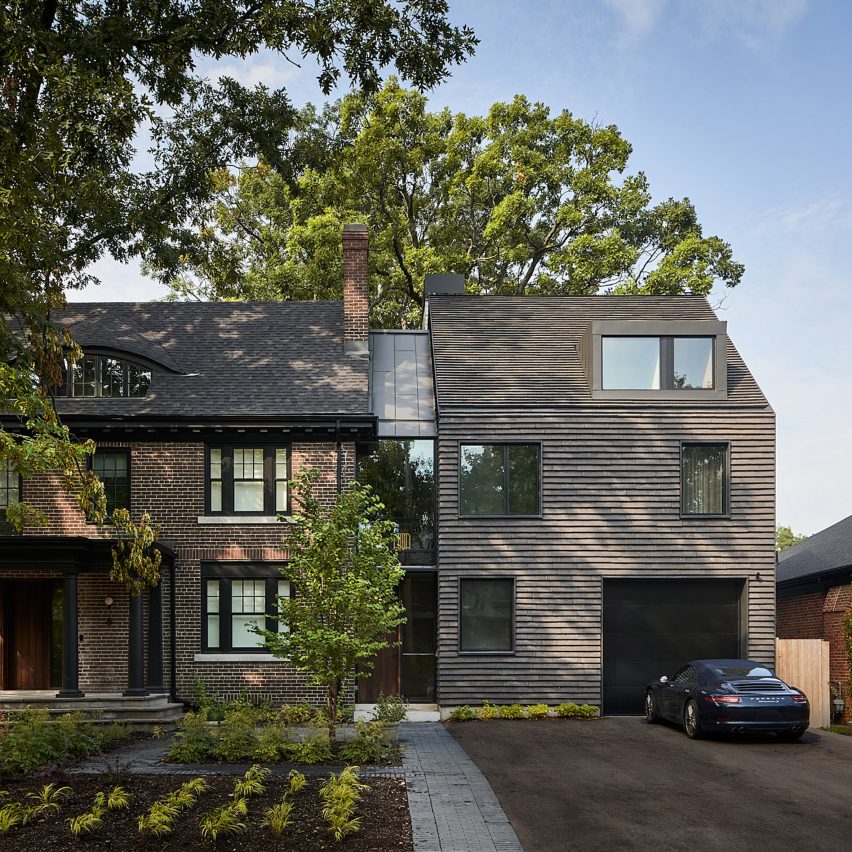 A shingle-clad addition is meant to mimic the scale and massing of a 1920s landmarked home, revamped by Canadian studio Drew Mandel Architects.

The project, House on Bracondale Hill, is named after its location in Toronto‘s Bracondale Hill neighbourhood – one of the city’s earliest garden suburbs.

The project entailed the renovation and expansion of a Georgian Revival-style house dating to 1924. The clients, a family of five, desired a brighter and more spacious home that accommodated a contemporary lifestyle.

Because the brick building is listed on the city’s historic register, its entrance facade had to be preserved.

Local firm Drew Mandel Architects conceived a plan to retain the facade while adding a multi-storey wing that respectfully merges with the original home.

“The addition fills in the missing tooth of the street – formerly the side yard – on this anomalous double-lot and echoes the scale and massing of the existing structure,” the architect said.

Clad in grey-brown clay shingles, the extension has apertures of varying sizes and a pitched roof.

Emerging from the roof are rectangular dormer windows in both the front and rear, with the front one drawing a connection to an eyebrow dormer on the original home.

Several modifications were made to the existing dwelling.

On the building’s backside, the team added two boxy dormer windows, along with a glazed enclosure at the ground level. Tall, sliding doors lead to a new concrete terrace that steps down toward a swimming pool.

The team also fully redesigned the interior, including the creation of a white, sculptural staircase made of bendable plywood, known as wiggle board. Once installed, the stair enclosure was plastered, sanded and painted.

The residence, which now totals 484 square metres, offers ample space for the family.

The public areas are found on the ground level, where the team placed an open-plan living room and dining area, a kitchen with a breakfast nook, a family room and a garage.

The first floor encompasses three bedrooms, a lounge, an office and a double-height main suite. The top level holds guest quarters and a lounge.

The dwelling also has a sizeable basement with a basketball court, recreation room, hobby room and bedroom.

Interior finishes include white oak cabinetry, a quartzite-topped kitchen island, and terrazzo and wooden flooring. In a powder room, pink-hued marble was used to form a wash basin designed by the architect, with a solid wood base fabricated by the client.

Sustainability was a guiding concern for the project. The team incorporated a greywater re-circulation system, in-floor heating, a green roof and a rain-barrel water management system. Original bricks that were removed during construction were reused in certain areas of the home.

The team also took great care to retain the big, leafy trees on the site.

“The wide but shallow depth of the house allows all existing, mature trees to be maintained and also provides generous access to natural light,” the team said.

Drew Mandel Architects was established in 2004. Other projects by the Toronto firm include the Cedarvale Ravine House, which has grey stone walls and an overhanging top story, and the Moore Park Residence, which is designed to sit sensitively among its 1920s neighbours.

Photographs are by Doublespace Photography and Drew Mandel Architects.