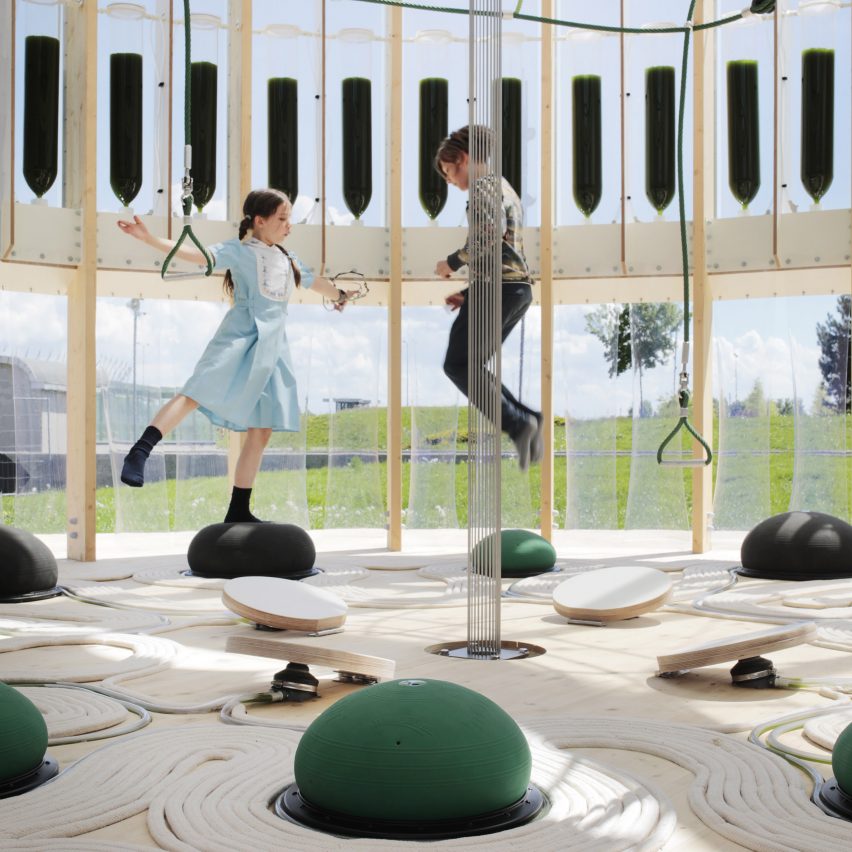 EcoLogicStudio has designed AirBubble, a children’s play pavilion that uses algae in solar-powered bioreactors to remove carbon dioxide and pollutants from the air.

The London-based studio claims the 52 bioreactors mounted around the structure’s perimeter can purify the entire volume of air inside the pavilion each day to keep pollution levels within World Health Organization guidelines.

AirBubble is located outside the Copernicus Science Centre (Centrum Nauki Kopernik) in Warsaw, Poland, a site EcoLogicStudio chose partially because the city is one of the most polluted in Europe.

Algae in the bioreactors uses photosynthesis to split carbon dioxide into carbon, which it needs to grow, and oxygen, which it releases into the cylindrical interior. The algae also absorbs atmospheric pollutants.

The  52 glass bioreactors contain a total of 468 litres of living green chlorella sp. algae cultures. This can filter 200 litres of polluted air per minute, the designers claim, meaning the algae can purify all the air inside the 283-cubic-metre structure in a 24-hour period.

The algae needs to be harvested each week while the power needed to run the bioreactors is “inexhaustible and renewable”, according to EcoLogicStudio.

The solar energy drives the photosynthesis by which the algae purifies the air, while the children’s play activates machinery that moves liquid through the bioreactors.

The play equipment within AirBubble consists of ropes, bouncy spheres and pedal pumps. When there are no children in the space, an air pump in the timber deck guarantees the bioreactors get the required aeration.

“We wanted to create a new kind of playground that was at the same time fun, safe and educational for all kids,” Pasquer told Dezeen. “We wanted to channel the power of play towards making meaningful social and ecological changes to our cities.”

“The link between urban air quality, respiratory health and public wellbeing has become more and more obvious during Covid and it is now a critical factor, especially for children in the post-pandemic world.”

The studio says the setting is also suitable for an outdoor classroom, as the bubbling of the bioreactors creates a calming white noise that masks the sounds of the city beyond.

AirBubble integrates and updates an earlier project by the studio called PhotoSynthetica, which covered a Dublin building with an algae “curtain”.

A similar EFTE membrane wraps around AirBubble, protecting the equipment inside and maintaining the microclimate.

Other aspects of the architectural morphology also enhance the workings of the bioreactors. The circular shape allows the reactors to collect light in all directions throughout the day, while the inverted conical roof membrane stimulates the recirculation of air.

It creates a natural stack effect that promotes the expulsion of heat and moisture through openings at the top.

Even with new air entering the space through these openings and through the curtained doorways, the system still keeps the pollution levels below the WHO limit.

Timber was chosen to lower the environmental impact of construction. The cross-laminated timber (CLT) comes from Estonian managed forests, and according to EcoLogicStudio, when combined with the effects of the algae, it means AirBubble will be carbon-negative during its life cycle.

Based on data collected by EcoLogicStudio, AirBubble has managed to reduce the level of air pollutants inside the structure so that it is within WHO safe limits.

Compared to outside the structure, there is a reduction in the peak level of fine particulate PM2.5, one of the core air pollutants, of between 78.6 and 85.7 per cent each week.

This is all achieved through the algae cultures, which require harvesting once a week to reduce their concentration and to create room for new growth. Paasquer describes the system as “self-sufficient and very resilient”.

“The great thing about nature-based solutions is that what for us is polluting for algae is food,” she said. “So at the end of the cycle we are not left with a dirty filter to send to landfill such as in the case of typical mechanical filtering technologies.”

“The pollutants are transformed into usable biomass, raw material for several bioproducts, such as biofibers, bioplastics, food supplements and natural cosmetics.”

Alongside the installation, the Copernicus Science Centre is hosting an exhibition explaining how AirBubble works, with interactive installations to educate and inspire children.

“There is untapped value in bringing the bio-intelligence of natural systems into cities, turning buildings into living machines that produce energy, store CO2 and clean the air,” said EcoLogicStudio co-founder Marco Poletto.

“To achieve this, we need to think about the living world as a part of the current digital revolution: nature becomes part of a new bio-smart infrastructure.”