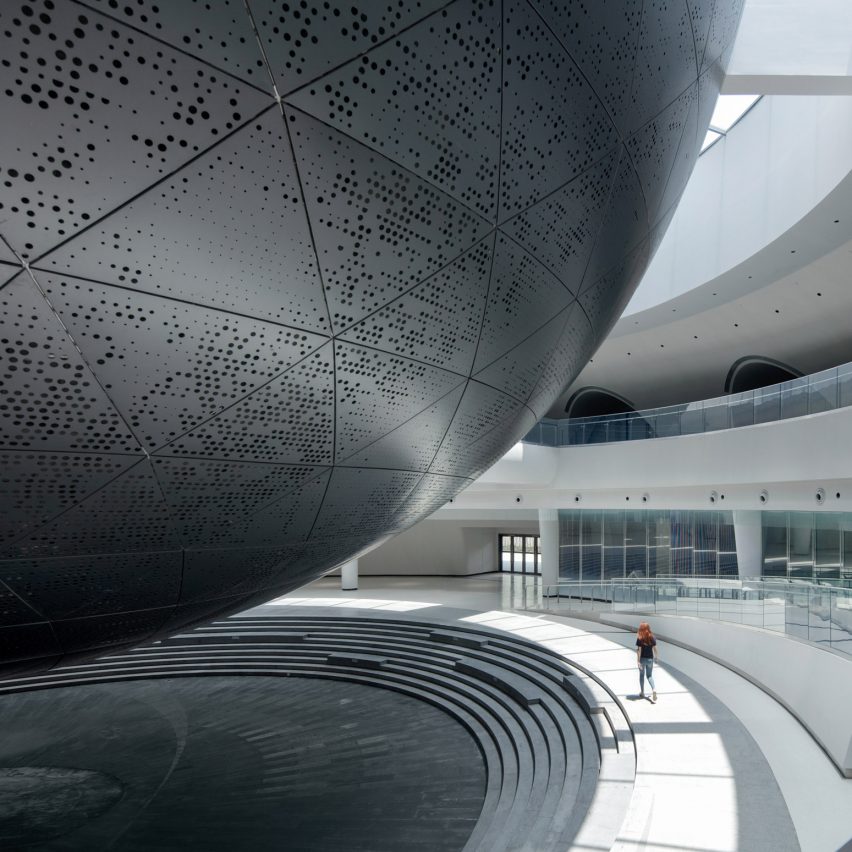 Designed to reflect the shapes and geometry within the universe, the form of the recently opened museum in Shanghai has no straight lines or right angles.

“The foundational design concept of the Shanghai Astronomy Museum was to abstractly embody within the architecture some of the fundamental laws of astrophysics, which are the rule in space,” explained Ennead Architects design partner Thomas J Wong.

“To the extent possible, we wanted this building to echo the essence of the universe and there are no straight lines or right angles in space!” he continued.

“Once we embraced the idea of a set of curvilinear forms, we capitalized on every opportunity to make it the very basis of the building and experience.”

Located in the Lingang to the southwest of Shanghai, the institution forms part of the Shanghai Science and Technology Museum, and at 39,000 square metres is said to be the “largest museum worldwide solely dedicated to the study of astronomy”.

Ennead Architects designed the building around three distinct architectural forms that were each derived from the movement of bodies within the universe.

“We are within a universe that is continuously in motion, something as essential as it is easy to overlook,” said Wong. “The notion of orbital motion and its relationship to time became a primary source of architectural inspiration.”

“There are three primary design elements that define the building parts and also provide an architectural lens for observing the earth’s own orbital motion: the inverted dome, the planetarium sphere, and the Oculus,” he added.

The museum is split into two large rounded volumes, one of which overhangs a plaza and reflecting pool in front of the main entrance to the museum.

A circular opening within this cantilevered volume, named “The Oculus”, was designed to show the passing of time. At midday on the summer solstice, a full circle is projected on a black platform built within the plaza.

“We designed this building with a real awareness of the visitor’s journey from start to finish and wanted to provide several moments of impact and reflection along the way,” said Wong.

“Before even entering the building, one is greeted by a heroic cantilever, which extends some 40 meters beyond the vertical concrete piers which support it.”

The main entrance leads to a large entrance hall and reception, which contains a curving ramp that leads to the various exhibitions and is topped with an inverted dome.

Created as the culmination to the sequence of galleries, a rooftop space on top of the inverted dome has an “unimpeded view of the sky”.

“The approach and entry sequence were carefully crafted choreography, where one senses the force of compression while travelling underneath the entry cantilever, only to emerge in a light-filled swirling space that brings your gaze upward,” explained Wong.

“A monumental concrete tripod soars overhead in the main atrium and cradles the spiralling ramp as well as the thin membrane of the inverted dome, a tension structure through which the dappled sun flows.”

The majority of the gallery spaces are positioned on one side of the entrance hall, with the planetarium theatre located on the other.

Set in a sphere that is suspended above a small auditorium by three concrete supports, the planetarium was designed to have an immediate visual impact.

“Another moment of impact within the Shanghai Astronomy Museum occurs with the weightless suspension of the sphere, gradually revealed as one approaches from the atrium and visually defying all sense of gravity,” said Wong.

“Embedded in the roof plane of the lower museum wing, as if rising out of the Earth-bound horizon, the sphere gradually emerges into view as one rounds the building from the outside, the drama unfolding as though one were approaching a planet from one of its moons.”

Wong hopes that the building will supplement the exhibitions in helping visitors understand the universe.

“Part of what was driving our thinking when developing the design for the Shanghai Astronomy Museum was how we could supplement the gallery content and create a building that made people more aware of the sky above – one that didn’t just house exhibits about space, but put visitors into a direct engagement with the stars,”

Whatever their age or education level, people can observe and hopefully understand more about some very basic underpinnings of astronomy through a series of direct, physical experiences,” he continued. “Space can seem so abstract – we wanted to provide something that was tangible and exciting.”

Ennead Architects is New York-based studio, which was founded by AIA Gold Medal-winner James Stewart Polshek and renamed following his retirement in 2005. The studio has previously renovated IM Pei’s Eskenazi Museum in Indiana and designed a law school in downtown Phoenix.

Numerous museums are being built in China. Recent examples include art museum wrapped in black corrugated metal designed by Álvaro Siza, the Tadao Ando-designed He Art Museum in Guangdong by and a V&A-backed design museum in Shenzhen designed by Fumihiko Maki.

The post Ennead Architects designs Shanghai Astronomy Museum to "echo the essence of the Universe" appeared first on Dezeen.