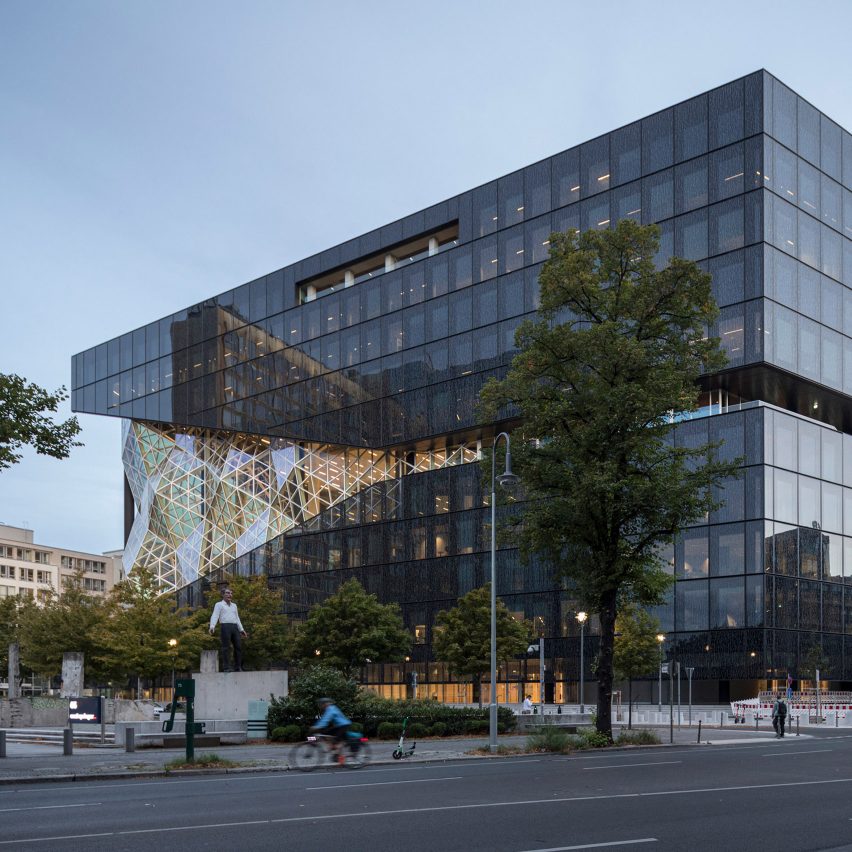 A diagonal atrium enclosed by faceted glass protrudes from the exterior of the Axel Springer building, which OMA has completed in Berlin, Germany.

The office block is the latest addition to the German media and technology company Axel Springer‘s campus on Zimmerstraße and provides 52,000 square meters of workspace for 3,000 employees.

OMA‘s design is intended to be open and transparent to “lavishly broadcast the work of individuals” –  reflecting the work of the company and challenging traditional offices that conceal internal operations.

“In the typical office building, a visitor enters and then disappears,” said Rem Koolhaas, founder of OMA. “It is far from clear what happens inside.”

“In the new Axel Springer building, people and their interaction are the essence,” he continued.

“The Springer building is a tool for the further development of a company in perpetual motion. It offers its users a physical base – a wide variety of spatial conditions, intimate to monumental – in contrast to the flatness of working in virtual space.”

OMA won a competition to design the building in 2014 to symbolise and facilitate Axel Springer’s transition from print to digital media. It was selected ahead of proposals by BIG and Buro Ole Scheeren.

“Its new building on the campus in Berlin acts both as a symbol and a tool in this transition – a building to lure the elite of Germany’s digital bohemia,” OMA explained.

Inside, the Axel Springer building is planned around a “valley” of 10 cascading floors, which gives rise to the 45-metre-high atrium echoed in the faceted exterior.

Each of these staggered floors is lined with a terrace, which each open out to the soaring atrium to allow employees to interact and share ideas with each other across the space.

The terraces form a contrasting work environment to the more formal office spaces that occupy the rest of the building, positioned to the rear of each floor.

These workspaces are enclosed and marked externally by the “solid part” of the building, which is clad in the linear, tinted glass.

The Axel Springer building’s two work zones are all connected by 13 bridges, which offer employees a chance for physical encounters and communication.

This includes a “meeting bridge”, or viewing platform, which cuts through the atrium to provide panoramic views of the office.

The building is complete with a publicly-accessible ground floor, which contains studios, event and exhibition spaces, canteens and restaurants, two basement levels and a roof-top bar.

“The common space formed by the interconnected terraces offers an alternative to the formal office space in the solid part of the building, allowing for an unprecedented expansion of the vocabulary of workspaces: a building that can absorb all the question marks of the digital future,” concluded OMA.

OMA, otherwise known as the Office for Metropolitan Architecture, is a Dutch studio founded by Koolhaas with Elia Zenghelis, Madelon Vriesendorp and Zoe Zenghelis. It has offices in Rotterdam, Hong Kong, Beijing, New York, Dubai, Doha and Sydney.

The studio also recently completed an office for Tencent in Beijing, China, which takes the form of a giant glass building punctured by geometric insets.

Elsewhere it is developing the Morden Wharf neighbourhood for London’s riverside, the Feyenoord Stadium in the Netherlands and a garden bridge for Washington DC.

Photography is by Laurian Ghinitoiu, courtesy of OMA.