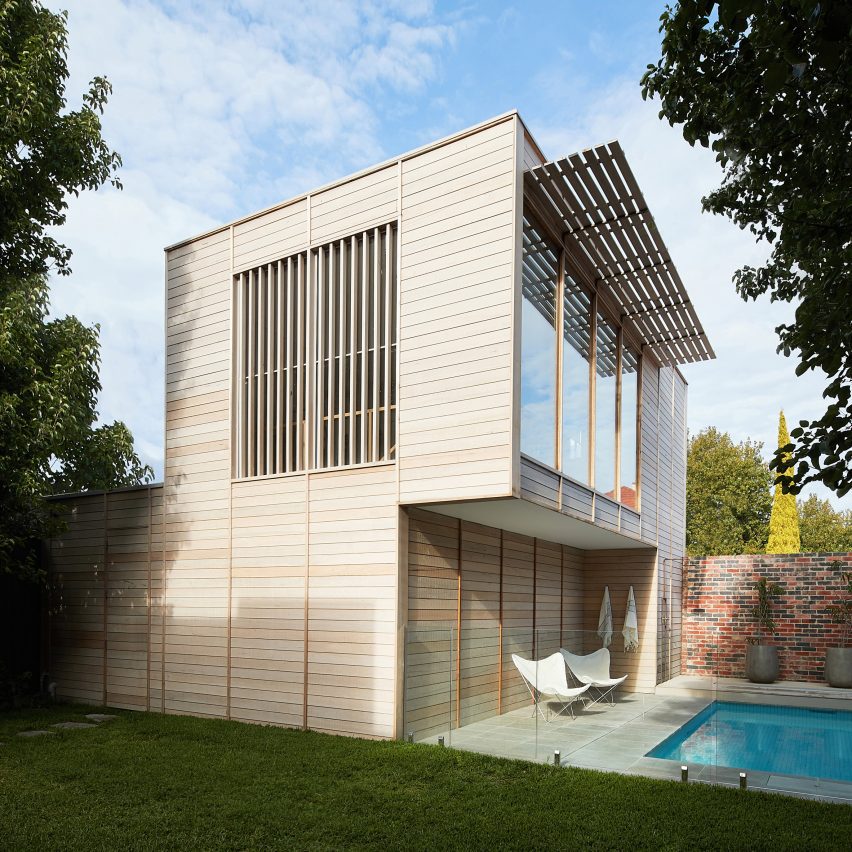 By removing an old garage, architecture studio Foomann has made room for a gym, a swimming pool and a campervan in the garden of a home in suburban Melbourne.

The project, called Broadway, creates a new two-storey building in the garden of the Edwardian property, which is located in Elwood.

The clients, a couple with two young boys, had asked Foomann to adapt their home to better suit their active lifestyle.

“They are a health and fitness-focused family who love to pack up their campervan and hit the open road,” explained Jamie Sormann, who runs the Melbourne-based studio with partner Jo Foong.

The garden previously contained a typical garage, but it occupied the sunny northern corner.

Fooman’s design replaces this garage with a swimming pool. A new two-storey building is instead positioned in the southern corner, creating a spacious garage for the campervan on the ground floor, and a gym, sauna and bathroom facilities on the first floor.

The project was completed as part of a wider renovation of the house, which included upgrading the kitchen and adding new bedrooms. However, the architects felt it was important for the gym to be located in the new garage building, rather than the main house.

“By locating the gym away from the main residence, it provides the occupants with a retreat,” Sormann told Dezeen.

“The parents train daily, and the separation allows them time and space,” he said. “This was central to the initial idea, so it was natural to couple it with the campervan garage.”

High ceilings on the ground floor create plenty of room for the camper, plus there’s also storage space for bicycles and surfboards.

Upstairs, a glazed wall creates a feeling of spaciousness for gym users. 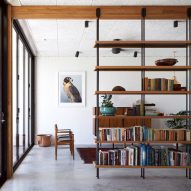 The new building is clad with silvertop ash, which ties in with the timber architecture of the house while also offering a laid-back, beach feel.

“The material palette is environmentally and contextually appropriate, and reflects the client’s desire for healthy spaces,” said Sormann. “Silvertop ash has a relaxed, coastal quality and will weather gracefully.”

The architects chose the same material to front new balconies on the house, creating further cohesion between the two buildings.

For the swimming pool, the design was planned to accommodate a resistance-current system to allow swim training at a professional level.

To make this work, the pool needed to be symmetrical with curved steps and corners to allow water circulation.

A recess within the building volume creates space for seating and hanging towels at the pool’s edge, while an outdoor shower has been installed in the corner.

“The building reflects the family’s health and fitness ideals – rigorous and disciplined, yet still relaxed and fun,” said Sormann.

Sormann and Foong established their Melbourne-based studio in 2008. Other projects by the pair include a house renovation that celebrates wooden beams and a robust and economical new-build.

Photography is by Willem-Dirk du Toit.