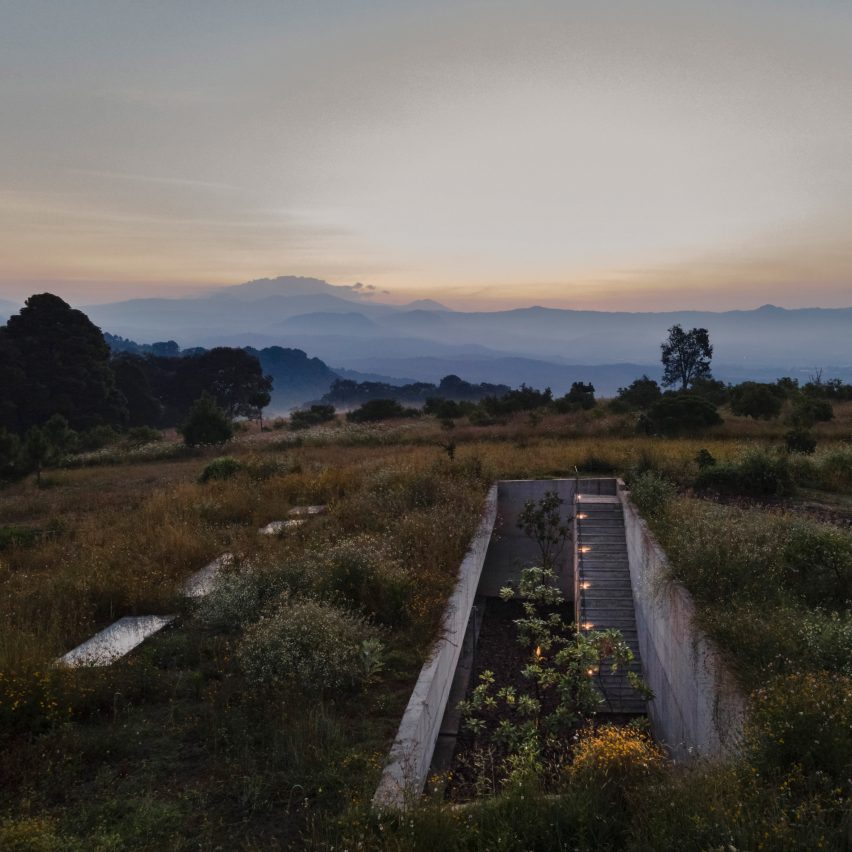 Mexican architect Francisco Pardo has created a partly underground weekend home that is meant to exist in “pleasant tension” with the natural landscape.

Casa Aguacates is located in Valle de Bravo, a rural lake town that is a couple of hours by car from Mexico City. Known for its pleasant weather and scenic terrain, the area is a popular getaway spot for urban dwellers.

The dwelling was designed to serve as a weekend retreat for a client who enjoys hang gliding.

The 442-square-metre home sits on an unusual site – an avocado field that slopes down toward a forest.

“The main idea was to have a view of the forest, but the client also wanted to leave the avocado field intact, which is how we arrived at the decision of burying the house,” said Francisco Pardo, who is based in Mexico City.

Trapezoidal in plan, the back of the house is level with the ground and opens toward a grassy yard.

The home’s front portion is sunken below ground and is accessed via an exterior staircase on the south. This side of the house faces wild vegetation, in contrast to the “domesticated landscape” found in the rear.

“Thus, the project exists between two realities, functioning as a subtle expression of architecture’s ability to exercise control over – and coexist in pleasant tension with – its natural surroundings,” the architect said.

Due to the client’s love of hang gliding, the architect placed a special emphasis on the rooftop, dubbed the “fifth facade”. The roof is covered with greenery and punctured with four linear skylights.

“The intention to have minimal impact from that perspective became the project’s defining characteristic,” the team said.

The interior layout is simple and fluid. The central portion holds a kitchen, dining area and living room. To one side is a main suite and studio, while the other side is occupied by two guest rooms.

The living room opens onto a sunken garden.

“The area was pierced to become an interior patio, providing a second source of sunlight and ventilation, as well as a juxtaposition of natural elements,” the team said.

The architect used a restrained palette of materials that would be easy to maintain – an important consideration for a weekend dwelling.

Walls are made of bare concrete. In some areas, surfaces are coated with chukum, a natural stucco from the Yucatán region.

The dwelling also features partitions made of pine that had been used as formwork during the construction process. The salvaged material was also used to build a cabin uphill from the main dwelling.

“We actually used more of that leftover wood to construct a cabin above the house,” said Pardo. “It can be a service area or a lookout point because it offers panoramic views of the site.”

Other work by architect Francisco Pardo includes the conversion of a derelict, 19th-century building in Mexico City into an office and co-working space – a project designed with architect Julio Amezcua.

The photography is by Sandra Pereznieto.