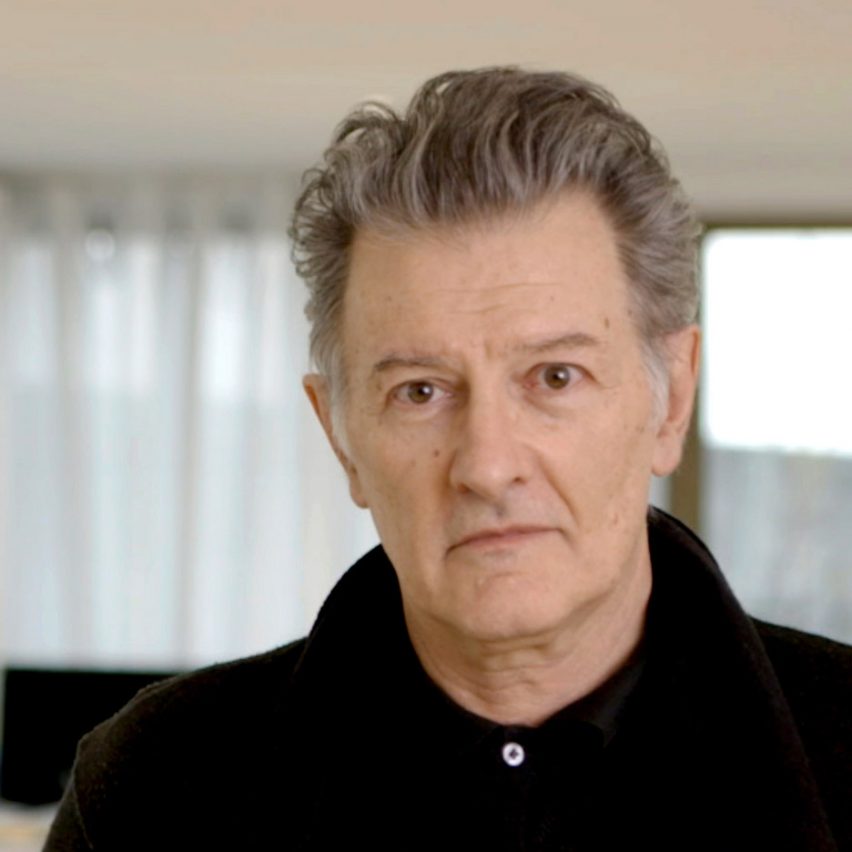 In this previously unpublished interview, Lacaton & Vassal co-founder Jean-Philippe Vassal explained why the 2021 Pritzker Architecture Prize-winning studio believes that buildings should be renovated instead of demolished.

“Just try to repair and just try to add what is missing,” said Vassal. “You will give much more pleasure than by rebuilding after demolition.”

Vassal, who along with partner Anne Lacaton won the 2021 Pritzker Architecture Prize earlier this week, spoke to Dezeen ahead of the annual architecture lecture he delivered at the Royal Academy of Arts in London in 2019.

In the interview, the 67-year-old architect explained the thinking behind the studio’s refurbishment of a complex of more than 500 social-housing units in Bordeaux, which won the 2019 Mies van der Rohe Award.

Instead of demolishing the 1960s housing block, Lacaton & Vassal undertook a refurbishment of the blocks, adding winter gardens at every level to give residents more space and insulate their homes. This aligns with the studio’s philosophy of designing with generosity to both people and the environment.

“We cannot just do the minimum, we have to really think of how to do the maximum,” said Vassal.

Working with existing buildings makes economic as well as environmental sense, he argued.

“If we talk about keeping buildings instead of demolishing them, it’s the first step towards sustainability; to make sustainable what already exists.”

“Using as few materials as possible, by keeping into account what is already there, working with natural and free elements, such as the air, the light and the sun.”

The Paris-based firm, which was founded in 1987,  was commended by the Pritzker Prize jury for their “democratic spirit”.

“They have proven that a commitment to a restorative architecture that is at once technological, innovative, and ecologically responsive can be pursued without nostalgia,” said the jury.

“The modernist hopes and dreams to improve the lives of many are reinvigorated through their work that responds to the climatic and ecological emergencies of our time, as well as social urgencies, particularly in the realm of urban housing.”

Dezeen columnist Phin Harper said the award going to a practice that specialises in refurbishments symbolises “an important shift in the values of wider architectural culture“.

Vassal was invited to give the RA’s annual lecture on architecture to give an overview of his practice’s work and core values.

Read below for an edited transcript of the interview with Jean-Philippe Vassal:

India Block: Would you tell us, in your own words, what it is that your practice does?

Jean-Philippe Vassal: We try to understand what is an architect today? What are the main objectives that we could have as architects dealing with the questions of today about the quality of life, comfort, pleasure, freedom, economy, ecology, sustainability? Are we positive and optimistic towards the complexity and richness of the city, and how can we be inventive in any situation?

India Block: For 530 dwellings you approached a 1960s housing block and renovated it, how do you begin with a project of that scale?

Jean-Philippe Vassal: Scale only exists if you stay in your office and try to draw the building or the city on paper. But as soon as you go to the place, as soon as you knock on the door and talk with people that are in the building, there is no more scale.

Because it is, in fact, a family and you talk with them, you listen to them 530 times in each flat. And if we try to do our best for this flat, and if we repeat that 530 times, after that the block is finished.

We really believe in this kind of urban planning, which is no longer the master plan but very precise intervention.

It is that if we do this maximum for each flat if we work on giving additional spaces such as winter gardens, balconies, a better electric system, new elevators, taking care of all of that, then when it is finished their wellbeing will look different, just by the consequence of all this work from the inside.

India Block: Did you go and speak to the people in the flats first, before you’d even come up with a design?

Jean-Philippe Vassal: People sometimes call [us] and say “what do we do with this building? We perhaps imagined that we could demolish it, but people don’t want that”. But for the 10 last years, no one has gone to see that building and there are many problems.

So we go and the first thing is to see, to listen, to understand. What are the questions? What are the problems? What is missing?

Most of the time people stay very far away, they never come to see and to talk directly with the people. So when you start talking and discussing with the [residents], then you step by steps, start to understand what could be possible.

India Block: Could you unpack for me this idea of freedom in your work with 530 Dwellings?

Jean-Philippe Vassal: I think it starts from the freedom that each one can have in its own individual flat and then it continues with the collective freedom with places where you can meet, you can have meetings, you can make workshops, etc.

You can say a flat is one or two bedrooms plus living room plus the bathroom plus a kitchen and you can make spaces for that, but perhaps there is an extra space which is for something that you cannot define as a function which is freedom.

All of these spaces offer new possibilities of choice for the inhabitants. And I am really confident with the inhabitants in their capacity of using these spaces. By being creative, inventive. I don’t know it all because it’s their life, it’s not mine. But most of the time I see in the flats that we have done that we are incredibly surprised by the inventiveness and the creativity of the inhabitants.

India Block: Adapting rather than demolishing is obviously a more environmentally friendly method, but some architects would perhaps prefer just to knock it down and to start with a blank canvas. Is it challenging to let go of that ego?

Jean-Philippe Vassal: If I was an architect during the 60s or the 50s, I would not have done these huge blocks in the periphery or around the cities. But they are here now and people have lived here for 40 years. And we know that it’s difficult to find new flats. Around Paris, you have more than 200,000 families searching for an affordable flat, and they cannot find it. It’s a totally crazy situation.

We try to have another attitude. If there is something existing and you add 50 per cent more to that, you will have 1.5. If you demolish and rebuild again, you have only one. In fact, you spend much more by demolishing and rebuilding than by addition.

There is a lot of possibilities with this method of addition, approaching the situation instead of coming back to the tabula rasa.

It’s an approach, I hope, that will [happen] more and more. There is a lot of possibilities with this method of addition, approaching the situation instead of coming back to the tabula rasa. Every city today is talking about sustainability, about affordability. So the only point is to do it and to do it, it is necessary to do it differently.

India Block: In the UK, our attitude has been to either demolish a lot of our housing stock from that era. Or, in the incredibly tragic case of Grenfell Tower, millions of pounds were spent on a refurbishment that made it an incredibly dangerous place to live. We now have hundreds of buildings across the country here that are covered in similarly dangerous cladding. Are attitudes different in France?

Jean-Philippe Vassal: In France, there has been a lot of demolition also, like in England. And I think it’s a mistake. I hope that more and more we will do it differently. But it has to be done with generosity, not [just] the minimum.

When we place some foam on the facades just for insulation, it doesn’t create any pleasure for the people. So we said no, it’s not foam that we have to give to the extension of the building. We have to create winter gardens, gardens at every level that are as efficient as another installation but also that create new living spaces, new spaces where people can meet, do some gardening, be freer than in the former flat.

We cannot just apply some technological insulation systems, it’s important to think about space, and how space can be improved.

We cannot just do the minimum, we have to really think of how to do the maximum.

We have a lot of these very bad examples of refurbishment in France. Most of the buildings that were built in the 60s have been refurbished in the 80s, and it is these ones that are in the worst situation, even more than the ones that have never been refurbished.

We cannot just do the minimum, we have to really think of how to do the maximum. This is the generosity is absolutely essential in any act of architecture, in any act of urban planning, I think we should be only pushed by this idea of generosity.

India Block: How much power do architects have in the negotiation with developers when it comes to generosity and affordable housing?

Jean-Philippe Vassal: We have to change the mind of the developers. It is possible to make much better flats, much more simple and much more affordable. So at one moment, the question is, do they really want to make these kinds of flats, or do they just want to stay in the market for ones they’ve done before? What in fact, creates this kind of financial product that defines the flats today in the cities?

India Block: This seems like a principle that would also apply to sustainability. That if you want to make a more environmentally friendly building, or adapt an existing building to be more sustainable, you need to think of a solution that will work in the long term. What is your approach to sustainability in your practice?

Jean-Philippe Vassal: I really believe the question of economy as very, very important. And in a way, this economy is also linked with ecology and sustainability. If we talk about keeping buildings instead of demolishing them, it’s the first step towards sustainability to make sustainable what already exists.

Then you can see what you can add because there is something missing or there something not working so well. So just try to repair and just try to add what is missing. So it is just doing what is necessary, and not too much. But even by that, you will give much more pleasure and much more capacity and much more freedom than in rebuilding after demolition.

Using as few materials as possible, by keeping into account what is already there, working with natural and free elements, such as the air, the light and the sun. All of this, for me, is part of sustainability and ecology, returning to simple things in a natural way.

The post "Generosity is absolutely essential in any act of architecture" says Jean-Philippe Vassal appeared first on Dezeen.