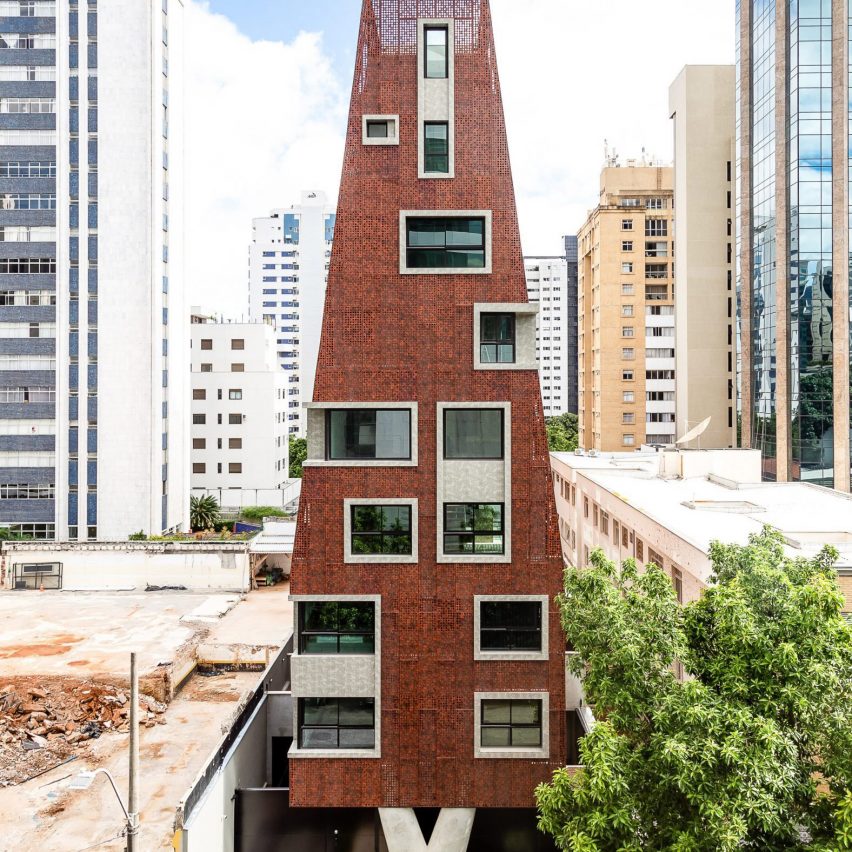 A perforated metal facade wraps this angular apartment building in Belo Horizonte designed to offer views from the inside while protecting the residents’ privacy.

The Casamirador Savassi is a development in the capital of Brazil‘s Minas Gerais province. The nine-storey building has 38 apartments built above a three-storey underground parking garage.

The units are mostly studio apartments but include 14 double-height lofts that enjoy a mezzanine or smaller secondary level. The project was completed late in 2021.

At the base, the site was only 12.70 metres wide. On top of that, as the small tower rose in height, the architects needed to make sure they built at a specific distance from nearby properties.

The result was a volume that tapers gradually as it reaches the upper storeys.

“The challenge of its volumetric mathematics, to respect distances, was one of the factors that influenced non-obvious decisions resulting in architecture created with its own identity,” said the architecture studio.

Dark aluminium panels clad the building, forming a layer that the architects describe as a “second skin”.

This metallic layer shades the facade from direct sunlight and creates a space outside the building where the architects could include mechanical equipment.

“The skin covering the building provides thermal comfort to the units,” the architects explained. The building’s small roof could not accommodate enough room for the mechanical equipment, which is why it was placed behind the facade.

The panels are randomly perforated with holes of varying sizes.

“That process makes it possible to see through them from the inside out, where city views are exposed through the skin,” Gisele Borges Arquitetura explained.

“However, from the outside looking in, it isn’t possible to see the interior, guaranteeing privacy to the resident.”

Larger openings were cut into the panels, allowing for the apartments inside to be naturally lit. Some of these even act as compact balconies and are accessible through sliding glass doors.

Gisele Borges Arquitetura explained that the reddish hue of the building was a reference to the region’s mining deposits. “An earthy reddish sepia tone alludes to the abundance in Minas Gerais of raw ore,” the firm explained. 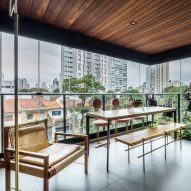 Because of the site’s narrow footprint, Gisele Borges Arquitetura needed to conceive of a structural solution that would bring the weight of the building to bear on a single point.

The firm drew influences from Brazilian architect Oscar Niemeyer’s work, creating a V-shaped structure that also signals the entrance to the building on the ground floor.

“Under the influence of Brazilian architect, Oscar Niemeyer, a V-shaped pillar was created, which is widely used in his works,” the architects explained.

Other buildings that used perforated metal for the facade include Levitt Bernstein and TKMT Architects’ design of a science facility in France as well as the Orly Festival Hall by Graal Architecture, which takes inspiration from local gabled houses.

The photography is by Juliana Berzoini, unless indicated otherwise.