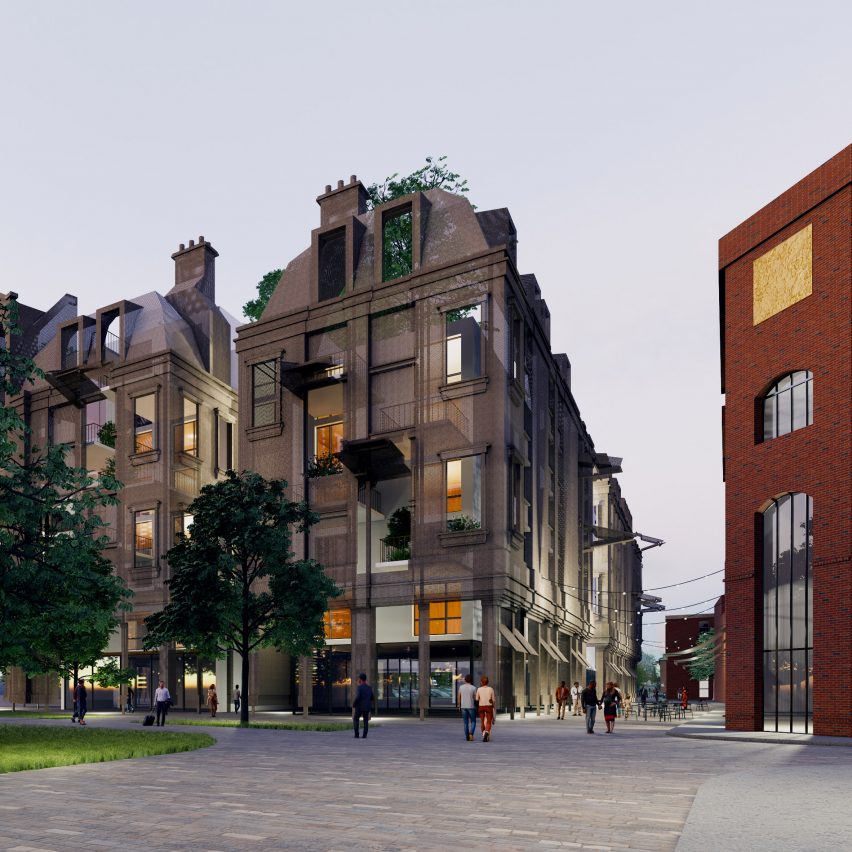 Named Redcliffe Way, the 120-apartment development will be wrapped in a bronze mesh that replicates the scale and forms of previous 18th-century buildings that occupied the site.

The development on a car park was designed to pay tribute to the history of the site, which was bombed during the second world war, while functioning as a modern development.

“The desire to resurrect the bombed urban block that had previously stood in front of St Mary’s provoked ideas of nostalgia, memory, altered narratives and monument building which led us to consider meshes or cast materials that can embody the ephemeral, miscast or misremembered narratives of the past,” the studio told Dezeen.

“Consultations with the local community suggested that rebuilding streets and their forms cleared by world war two bombing would establish urban coherence and provide an opportunity for the community to write their own narrative,” continued the studio.

“Remembering the past without sentimentality, we are structuring neoclassical facades in the style of the 18th century but in response to the desire of today’s community, with ephemeral and shifting illusions of empire and power.”

The development will comprise four separate buildings linked by balconies and roof gardens, with a bronze mesh enclosing all the buildings so it appears as one block.

The D-shaped urban block will surround an inner courtyard designed to be large enough to capture sunlight for planting. In addition to this, terraces and a roof level will provide residents with extra space for planting and other amenities.

“The ground floor is predominantly set aside for soft and hard landscaping used by residents and visitors, while street-facing enclosures expand the existing retail streets,” added the studio. 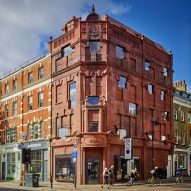 Watch our Architecture Project Talk about 168 Upper Street by Groupwork

A perforated bronze skin will partially surround the four buildings, providing the residents inside with privacy and partially shading the interiors from the sun to reduce overheating and energy use.

“At 30 per cent solid to 70 per cent void the sheet alone reduces the potential uplift of the overall embodied carbon. Applying this over-scaled ‘old window’ openings reduces the material demand further still,” said the studio.

The bronze layer will be offset at certain points to accommodate private balconies and colonnades, occasionally bending outward to act as a canopy, terrace, or pediment.

“Balconies and winter gardens stand independently from the walls and vary in depth, whilst the brass mesh which presents the elevation to the street is hung from a supporting structure,” the studio explained.

The studio, which was established by Amin Taha in 2003, hopes to begin construction on the project in 2024. Groupwork’s recent projects include a renovation of a 1970s office block and a 30-storey stone office block.

The visuals are courtesy of Groupwork.