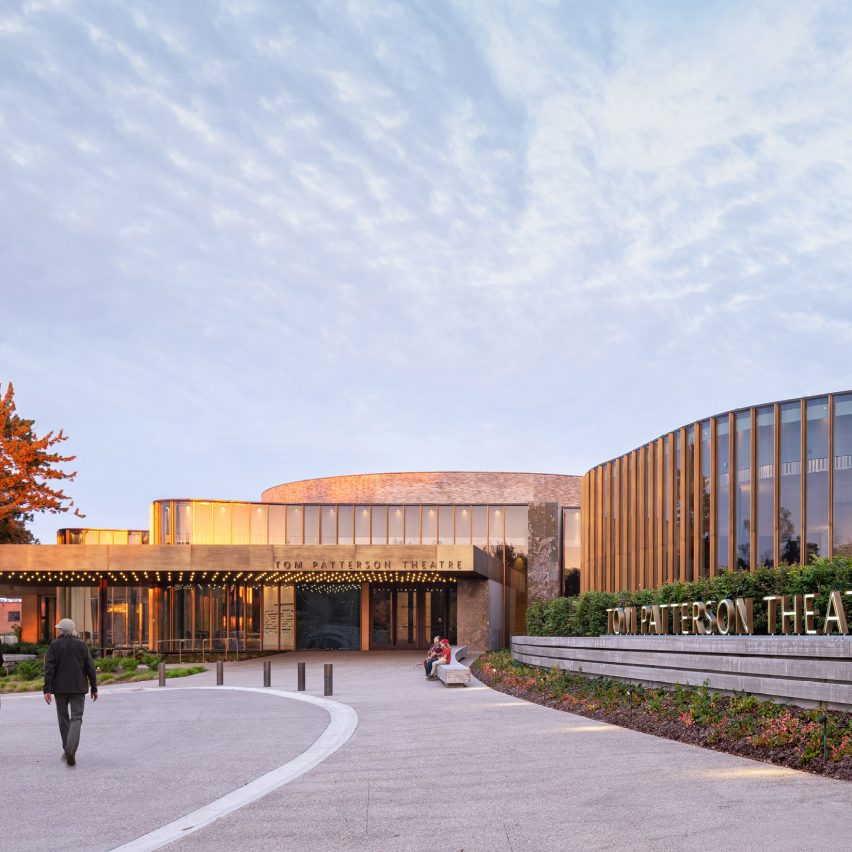 Dedicated to the performing arts, the 7,150-square-metre theatre stands on the banks of the Avon River. It was completed in the summer of 2020, though the official ribbon only took place last month due to the coronavirus pandemic.

Sitting on the site of a demolished theatre with the same name, Tom Patterson Theatre will primarily host events during the Stratford Festival – an ongoing exhibition of theatre in the Ontario town that runs from April-November yearly.

“They wanted an exceptional building with new programs that would enhance the festival and this community for decades to come,” said Hariri Pontarini Architects founding partner Siamak Hariri, who took the lead on the project.

The structure was oriented around the primary, horseshoe-shaped 600-seat auditorium. Around this symmetrical volume expressive glass wings were created that undulate along the river on one side of the building and the road on the other.

Extensive gardens and a terrace stretch between the structure and the river complete with walking paths and a selection of 25 varieties of plants and trees, many of which are indigenous to Ontario, according to the architecture studio.

The building is wrapped in 20 feet tall (six metres), double-glazed panels, which have been installed with a custom-made ceramic bird-friendly frit.

The glazed curtain wall is accented by bronze extrusions fabricated in Spain and finished with a patina in Toronto.

A large wooden canopy cantilevers over the entry promenade, which leads ino the primary lobby of the building.

At certain points in the facade, timber beams extended from the exterior into the interior creating cantilevered covered social spaces inside, including the seating area attached to the lobby.

Other external materials include pale Danish brick as well as Ontario limestone used for accents, both of which continue into the interior walls.

Between the interior theatre and the glass walls are oaken walkways and further social spaces, including the glass-wrapped Spriet Members’ Lounge with its skylight and a suspended fireplace. Thin slats of oak make up the ceiling of these spaces.

Located in the public spaces are three different bars, all made from a different type of stone, to serve patrons before and after performances.

Alongside the main auditorium is a smaller attached theatre named Lazaridis Hall, which has a removable stage made from elements of the previous structures. It can seat 250 and has views of the river, but can be closed for full blackout during performances.

The primary theatre was designed so that no one in the audience would sit more than 28 feet (8.5 metres) from the stage.

“Walnut wood cladding of the curved walls and ceiling support acoustic dampening and timely delivery of sound to each patron,” said the studio, which worked with acoustic designers Aercoustics Engineering to optimize the experience. 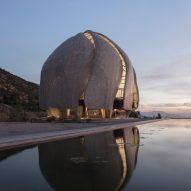 The stage was made custom from Canadian birch, the wall cladding of oak, and the festival collaborated with the architecture studio to create custom seating.

“We sought to create an emotional experience through architecture that complements the magic of transcendent works of theatrical performance,” said Hariri.

The studio also highlighted some of the sustainable features of the LEED Gold structure. Some of these include a high-efficiency facade, radiant in-floor heating, a system for stormwater management, and minimal glazing on the south-facing facade.

Other projects by Hariri Pontarini Architects include The Bahá’í Temple of South America outside of Santiago with a facade of steel and glass.