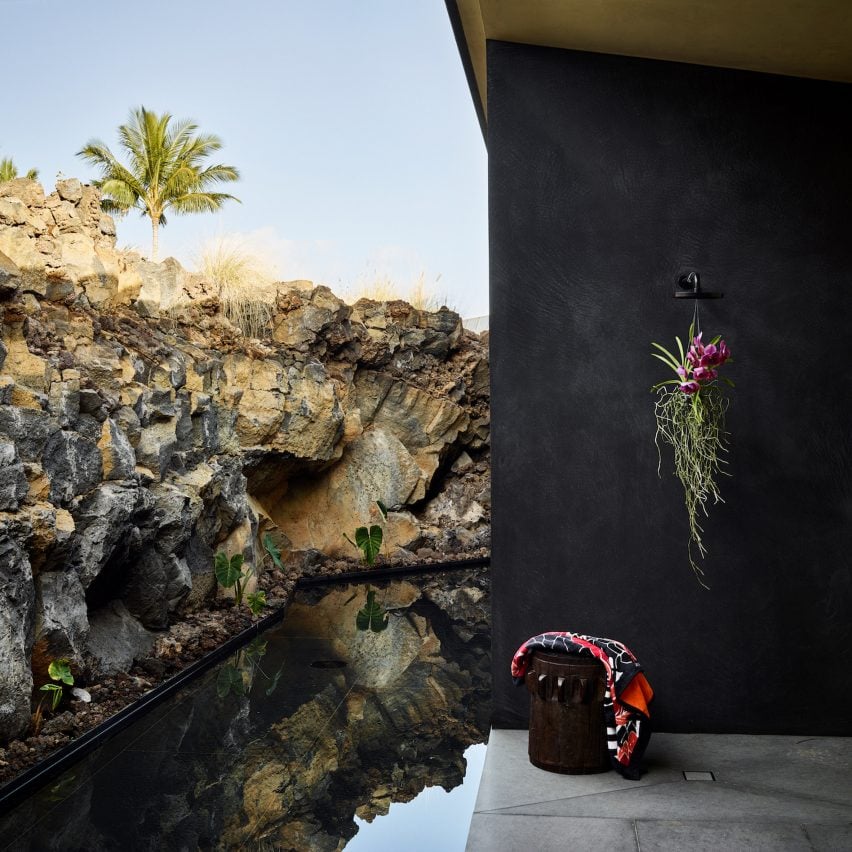 American firm Walker Warner Architects has perched a basalt and cedar-clad holiday home in Hawaii on a mountainside of lava rock with an infinity pool that looks towards the sea.

Named Kua Bay Residence, the house overlooks its namesake on the coast of Kona.

The rooms and spaces of Kua Bay Residence are designed to seamlessly transition into one another, a concept informed by the way in which lava and water flow towards the Pacific Ocean.

“The challenge was to manipulate the site so that the house would blend with the landscape while providing a graceful and multi-layered experience from mountain to sea,” said Walker Warner Architects.

The driveway leads to a sunken car park with a garage, which is hidden from the rest of the property by decorative Corten steel panels that also conceal a small guest house.

Covered by a green roof, the guest house blends into the lava rocks which tower over it.

“The roof is naturalised with lava rock and native grasses, which further emphasises the building’s direct relationship with the site,” explained the architecture firm.

Large windows from the guest house’s bedroom suite display a small, mountain-facing terrace with a private outdoor shower. The terrace takes the form of a rocky grotto with a reflective water feature designed to mimic molten lava.

Towards the house’s main volume, an elevated courtyard runs alongside more reflective pools.

Positioned in parallel to the other side of the courtyard are a cluster of trees and a large lawn, at the end of which sea-views are revealed through the house’s floor-to-ceiling glass doors.

A sea-facing traditional Hawaiian lanai, or terrace, opens out onto decking that becomes an infinity pool with expansive views. Kaho’olawe, the smallest of Hawaii’s eight main volcanic islands, can be seen on the horizon.

Walker Warner Architects is based in San Fransisco, and was founded in 1989. The firm recently transformed a warehouse into a wine tasting room in Healdsburg, California.

Other projects built in volcanic Hawaiian settings include a raised house by Olson Kundig positioned on a lava field, and Phoenix House, a dwelling on Big Island which sits at the base of Kīlauea volcano.

Photography is by Laure Joliet, Douglas Friedman and Marion Brenner.