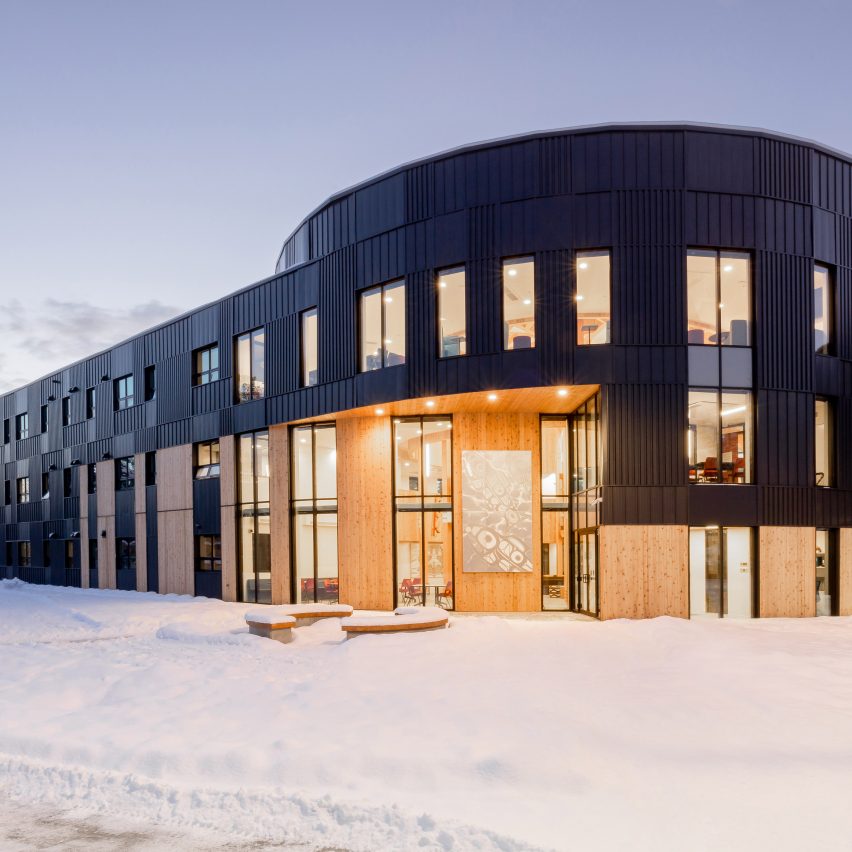 Called Wii Gyemsiga Siwilaawksat – a Sm’algyax phrase, which translates roughly to “where learners are content and comfortable” – the block is located at the Coast Mountain College on the ancestral lands of the Tsimshian Kitsumkalum First Nation.

The structure, which consists of modular student housing units oriented around a central atrium, was designed with the large number of Indigenous students in mind.

“Indigenous design principals were embedded throughout the building that represents the Northwest Coast region and the First Nation communities the college serves,” said HCMA.

Replacing 40-year-old student housing that was no longer serving the needs of the students, the block contains 36 different prefabricated “modules” that spread out from the central atrium.

“Each one was built off-site to enable faster delivery times,” said HCMA.

The architecture studio was informed by calls for decolonial action and respect for the cultural practices of Indigenous people in colonized nation-states as described in the United Nations Declaration on the Rights of Indigenous People when designing the facility.

HCMA described the processes of decolonial architecture as “the process of deconstructing colonial structures and rebuilding them to include both western and Indigenous worldviews”.

“Traditionally, architects are used to having authorship over the design expression,” said HCMA project architect Aiden Callison. “When we take a decolonized approach, we find ways to shift that power and develop processes where we take on the role of facilitators of the design process.”

“The process of developing the brief that HCMA responded to was built on a foundation of engagement and collaboration with the Indigenous communities that the College serves,” he continued.

One of the principal ways the design references local cultural heritage was through the use of cedar.

“The old-growth cedar tree is a symbol of the northwest coast,” said HCMA. “Used for shelter, clothing, transportation, ceremony, and spiritual beliefs, it’s been integral to local First Nations’ culture for thousands of years.”

However, due to the increasing rarity of old-growth cedar, none was used for the building’s structural elements.

“While the building’s expression honours the cedar tree and its vital role in the forests, the cedar that was used on the exterior cladding and interior finishes was smaller dimensional sizes that do not require the use of old growth,” said Callison.

References to cedar went beyond the use of the material, as the metal cladding on the exterior has been shaped to resemble the patterns on cedar bark.

Inside, cedar is used for the cladding of the central lobby. The atrium of the lobby is framed by three-storey-tall cedar posts that support a glulam “pin-wheel” structure at the apex of the atrium.

These eight cedar posts have been carved to represent the communities that the school serves and each floor of the student housing has “has a theme that represents [the First Nations’] distinct cultures expressed through artwork and carved cedar panels,” according to HCMA.

The layout of the central building includes the primary lobby, additional housing, as well as suites for elders and visiting family members.

In addition, the architecture studio included a “cultural room”, which it described as a “safe space for knowledge sharing and cultural practice, with a carved door and appropriate ventilation for smudging.”

Over 70 artists were commissioned to complete works including carvings and murals for the school.

Signage throughout the building was also translated into local languages under the supervision of speakers.

“As some spaces use colonial terms with no direct translation in Sm’algyax, the territory holders had the right to determine translations that were culturally appropriate, recognizing the rich nuances between languages that can make direct translation difficult or impossible,” said HCMA.

Contemporary gestures towards more equitable and sustainable building has led to renewed interest in Indigenous building practices and traditions.

A recent exhibition at the Barbican demonstrated three different building practices that could be helpful in mitigating the effects of the changing climate.

HCMA has been practising out of Vancouver for over 40 years. Its other projects include a football stadium with a faceted roof in Montreal.

The photography is by Bright Photography