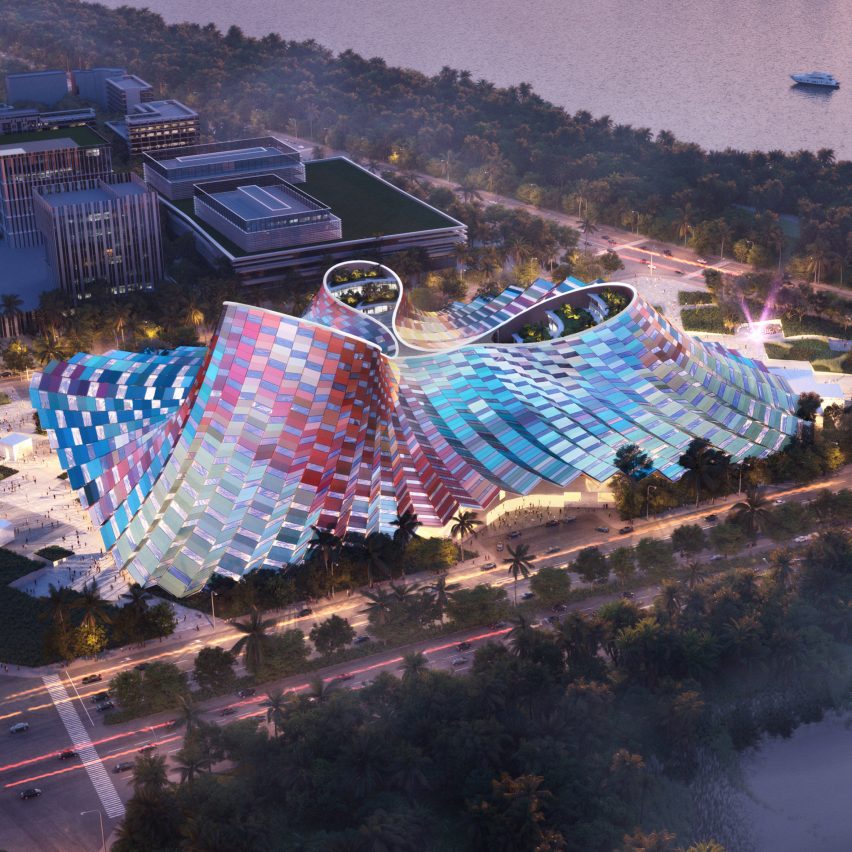 Set to be built in the city of Haikou on the island province of Hainan, the Hainan Performing Arts Centre will form part of a large-scale master plan to create a new cultural area in the Jiangdong district.

According to the studio, the design for the Hainan Performing Arts Centre will take cues from the volcanic landscape of the island of Hainan. The building will house three performance spaces, including an opera house, a concert hall and a theatre.

Visuals of the opera house show the building occupying a rectangular site, which is covered by a curving roof plane that peaks into a collection of three sculptural volcano-like cones at its centre.

Multi-coloured rectangular tiles will adorn the curving roof in reference to the “colours and movement” of the programme and events that will take place at the Performing Arts Centre.

“Our inspiration came from the volcanic landscape and the costumes, colours and movement of Hainanese opera,” said Heatherwick Studio partner Eliot Postma. 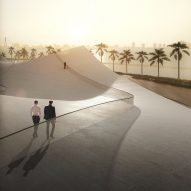 The volcano-like roof that surrounds the arts centre will act as a canopy to conceal a number of different open-air publicly accessible spaces, which the studio hopes will allow the centre to become an extension of the city.

“Many opera houses are cut off from their surroundings and only come to life when a performance is on,” said Postma. “We wanted to create a space that is an extension of the city and will contribute to life on the street throughout the day.”

“So the canopy shelters a mix of different spaces that form an open-air village, of which the halls are a part,” he added.

“It blends the formality of performance with the informality of island culture, making opera more accessible and offering everyone a space to meet whether you have a ticket or not.”

Once complete, the structure will accommodate up to 3,800 people and be host to a number of international productions, such as opera, ballet, musicals and other arts and cultural performances.

Heatherwick Studio’s design was selected as the winning entry in a competition organised by Haikou Tourism & Culture Investment Holding Group that called for a new landmark and performing arts centre for the area.

Construction is expected to break ground towards the end of 2022. The building marks the first time Heatherwick Studio has designed a music venue. Earlier this year Heatherwick Studio opened its 1,000 Trees shopping centre in Shanghai, which features over 1,000 trees and 250,000 plants across the nine-story building.

In 2021, Sou Fujimoto Architects released renders of its design for the Pavilions by the Seaside development in Haikou, which is also part of the area’s redevelopment masterplan.

The visuals are courtesy of Heatherwick Studio.