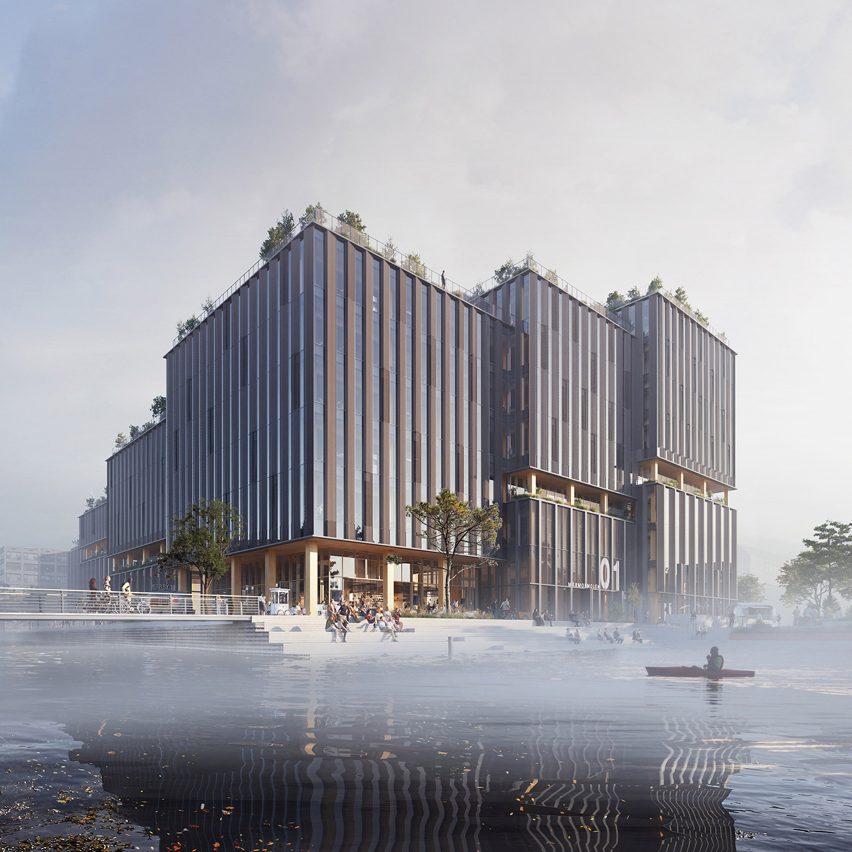 Danish architecture practice Henning Larsen and engineering company Ramboll have designed an eight-storey stepped wooden building for the Nordhavn waterfront on the eastern edge of Copenhagen.

Marmormolen was designed for Danish pension fund AP Pension and will be built in Copenhagen’s Nordhavn district. According to Henning Larsen, which designed it together with Ramboll, it will be one of the largest contemporary wood structures in the country.

“The building, which will be one of the largest contemporary wood structures in Denmark, combines office, retail, and public program on the popular Nordhavn waterfront,” said the studio.

By using timber as opposed to concrete, the building will “embed tons of carbon instead of emitting tons,” the studio added.

“Today, it is imperative that architecture challenges our usual notion of structures and materials,” said Henning Larsen partner and design director Søren Øllgaard.

“The construction industry is a major emitter of CO2, and we therefore also have great opportunities to make things better. We’re excited to be working with AP Pension on a project that puts sustainability and sustainable strategies such as the UN’s Sustainable Development Goals first.”

Marmormolen will be formed of a collection of rectangular cubes that differ in height, rising and falling in response to the site’s surroundings.

At its highest, closest to busy streets and train tracks, the building will rise to its full eight storeys. From here, it will gradually fall to three storeys, as it tapers down to a nearby residential area on the opposite side of the site. 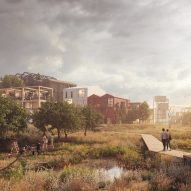 Marmormolen will contain offices, retail spaces and restaurants, and be surrounded by urban spaces including plazas, gardens and promenades on three sides of the building.

The ground floor of the building is planned as an extension of the nearby public waterfront, merging existing public amenities with a landscaped park and a large public marketplace.

A canteen and auditorium also located on the ground floor will function as both a public eatery and events space for markets and theatres.

On the upper levels of the building, workspaces will feature panoramic views across Copenhagen’s skyline and seafront, while a large shared courtyard at the centre of the building will provide the interior with green outdoor space.

Each of the rectangular cubes will have access to a rooftop terrace and gardens that will house beehives, butterfly hotels and areas for growing vegetables for use within the canteens.

“Workplaces used to be very interior and exclusive, but people today want to feel they are a part of a more diverse community and open up to their surroundings,” Henning Larsen associate design director and lead design architect Mikkel Eskildsen said.

“With Marmormolen we want to create more than a great office building, we also want it to give something back to the city and makes the building come alive – even outside office hours.”

Construction for Marmormolen will begin in early 2022 and is expected to open in 2024.

Elsewhere, Henning Larsen is developing Copenhagen’s “first all-timber neighbourhood” located on the outskirts of the city and a sustainable primary school in Sundby that broke ground earlier this year.

The post Henning Larsen reveals plans for "one of the largest contemporary wood structures in Denmark" appeared first on Dezeen.