Indian architect Balkrishna Doshi, the recipient of both the Pritzker Architecture Prize and the RIBA Royal Gold Medal, has died at the age of 95.

“A master wielder of form and light, Doshi has left an indelible legacy,” wrote Architectural Digest India on Instagram.

“A loving husband, father, grandfather, great grandfather, and a true inspiration to the people of this country. His contribution to architecture, art, life, culture and philosophy will be remembered forever.”

Doshi was born in Pune in August 1927 to a family of furniture makers. His six-decade-long architectural career began working with legendary architects Le Corbusier and Louis Kahn.

With a portfolio of over 100 built projects, his career is widely praised for the influence that it has had on the direction of Indian architecture.

Doshi began working with Le Corbusier as a senior designer in Paris, shortly after graduating from the JJ School of Architecture in Bombay, and later became his supervisor in Ahmedabad.

He then went on to work with Kahn, creating the Indian Institute of Management in Ahmedabad, which marked the beginning of a collaboration that lasted more than a decade.

Alongside his collaborations with Corbusier and Kahn, many of Doshi’s projects were created as part of his own studio, Vastu Shilpa Consultants, which he founded in 1955.

Key projects include the Aranya Low Cost Housing in Indore, which house 80,000 people and won the Aga Khan Award for Architecture in 1995, as well as the barrel-vaulted studio called Sangath from which his firm operates. 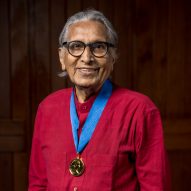 Doshi also created the Atira Guest House in 1958, the Amdavad ni Gufa art gallery in 1994, and the CEPT University, which he both designed and founded in 1966.

Elsewhere, he designed the Shreyas Comprehensive School Campus in 1963 and the 700-seat brutalist Tagore Hall & Memorial Theatre in 1971.

In 2018, Doshi became the first Indian architect to win the Pritzker Architecture Prize, and shortly after, he was also awarded the 2022 RIBA Royal Gold Medal.

In his Royal Gold Medal citation, he was described by the jury as having “helped define the direction of architecture in India and much of the adjacent regions”.

After winning the RIBA Royal Gold Medal in 2022, Doshi spoke to Dezeen in an exclusive interview, in which he described his architectural style as “natural” and summarised his philosophy in four words: “True architecture is life”.

“Design is accommodating lifestyles, merging with them,” said Doshi.

“I’m not really saying that this is measurable – these things are all unmeasurable – but they are very, very important.”

Alongside practising as an architect, Doshi has worked as an educator at several universities. He also founded the Vastu Shilpa Foundation, with the aim of helping to develop indigenous design and planning standards in India.

Doshi is the latest of a number of significant architects and designers who have recently passed away. In December, Japanese Pritzker Prize winner Arata Isozaki passed away aged 91 and punk designer Vivienne Westwood died aged 81.