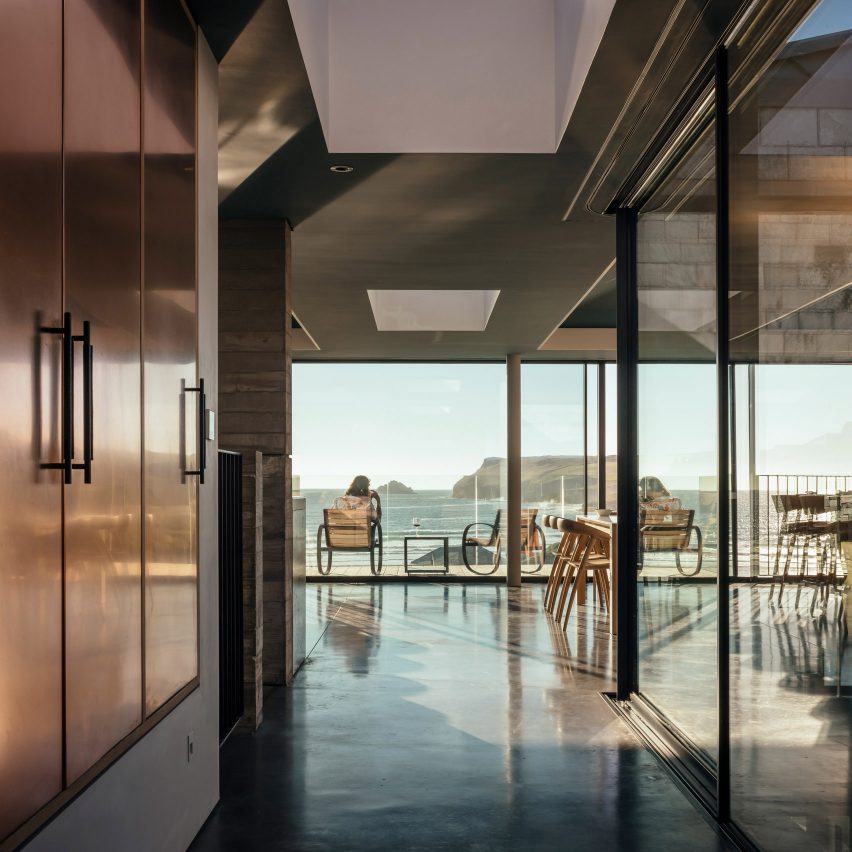 British practice Invisible Studio has completed a home on Cornwall’s northern coast, clad in local slate and copper to appear hewn from the surrounding craggy landscape.

Invisible Studio built the House with Courtyards into a steeply sloping site overlooking Polzeath Beach, and inserted a series of internal courtyards to create external spaces sheltered from the prevailing wind.

Around these courtyards, a cluster of blocks topped with irregularly pitched roofs is united by a central axis. This layout allows for framed elongated views through the home and out to sea, creating contrasting conditions between private courtyards and open living areas.

“Large, glazed elements make up much of the front facade, offering uninterrupted coastal vistas, while a series of courtyards are plunged into the building…they also become a part of the living spaces, bringing the outside in,” said the architecture firm.

The home is accessed by crossing a small bridge over a light well that illuminates a small lower ground floor space. A stepped route then leads up the site’s southern edge and connects to a large terrace overlooking the sea.

On the ground floor, the living space opens out onto this northwest-facing terrace. Bedrooms and bathrooms are tucked further into the building, with the largest located at its eastern end.

Lightweight steel staircases lead to the first floor, where a kitchen sits above the living areas. Further bedrooms are arranged around the central corridor, which creates a new relationship to the courtyards by looking down onto them.

Spaces on this level sit beneath white ceilings that express the irregularly pitched roofs atop the home’s blocks, punctured with skylights.

The home sits on a base of rough slate, with the floors above clad primarily in Delabole Slate tiles from a nearby quarry. The roof and window openings are finished in copper that has been allowed to weather.

“Our client wanted a home that felt embedded in the landscape, which could also focus all attention out to the majestic views formed by the sea and ever-changing light across the season and a single day,” said Invisible Studio founder Piers Taylor.

“It’s a complicated building which may appear simple because we limited the amount of materials used.”

The home’s interiors were also designed by the studio, which described the building as a “holistic architectural project”. Exposed board-marked concrete is used to finish the walls and create a central hearth in the living room.

Smooth concrete has been applied to finish floors throughout, and is contrasted by bright polished copper on cupboard doors and a series of inlet shelves in the kitchen.

Invisible Studio’s founder Taylor also recently carried out an extensive retrofit of Moonshine, his own off-grid home near Bath, to make it more sustainable.

The photography is by Jim Stephenson.