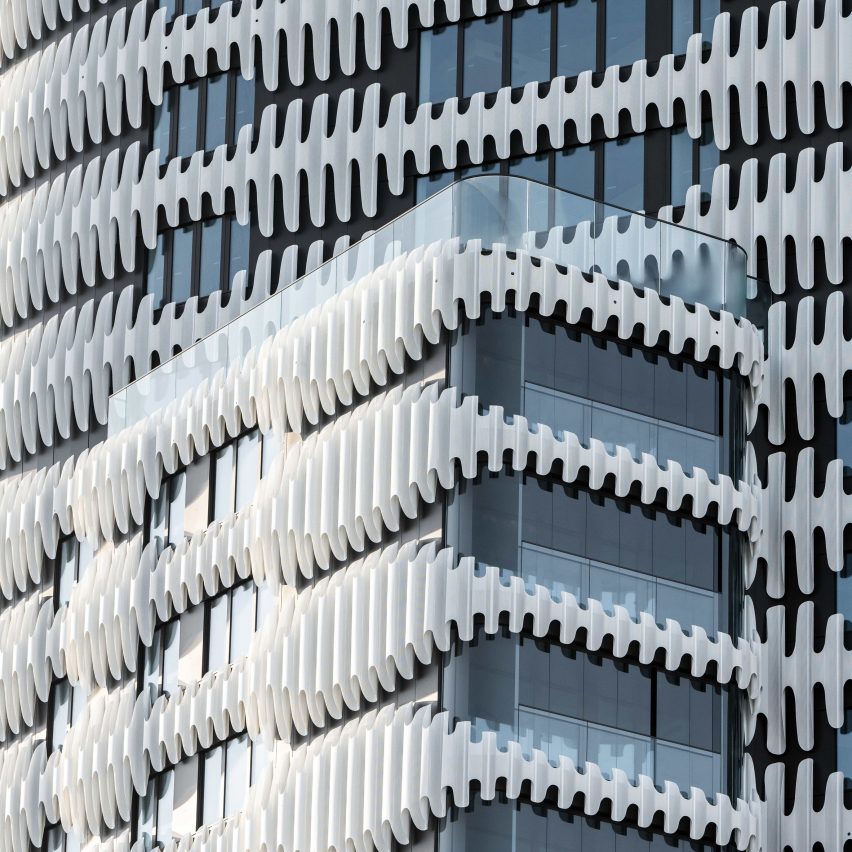 Architecture studio J Mayer H has completed a mixed-use tower in Düsseldorf, Germany, with profiled metal cladding that opens up like a zipper to provide views through its glazed facades.

The RKM 740 Tower is positioned at the 466th mile, or 740th kilometre, of the course of the Rhine river, where it runs through the Düsseldorf-Heerdt neighbourhood.

J Mayer H won an international competition in 2011 to design the tower, which contains several medical facilities and apartments on the former grounds of the Dominikus-Krankenhaus hospital.

White-metal cladding applied to the building’s exterior creates a wavy pattern that opens up like a zipper, revealing glimpses of the glazing behind. This facade treatment led the studio to give the project the nickname Zipper.

The studio, which is headed by architect Jürgen Hermann Mayer, was responsible for the latest phases of a wider project that has seen the site undergo major redevelopment over the past decade.

RKM 740 represents a significant addition to the skyline on the Rhine’s west bank. Its organic form is typical of J Mayer H’s architecture and provides a contrast to the existing hospital’s rectilinear 1970s buildings.

The building features a six-storey plinth containing the offices and clinics of several medical practices, specialists and therapists. Above this, a further 14 storeys accommodate residences with views across the Rhine and the city.

“The dynamic, organic shape of the building rises like clouds of mist towards a thin volume at the top,” said J Mayer H. 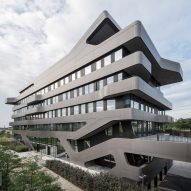 “It seems to grow in horizontal folds that move in the wind, condense, narrow and oscillate before our eyes, becoming unfocused,” the studio added.

RKM 740 Tower’s most distinctive feature is the perforated cladding applied to all of the facades. This metal screen protects the glazed curtain walls from direct sunlight and wind.

The density of the cladding changes across the various elevations, shifting from a largely open pattern on the east, south and west sides to a more closed configuration on the north side that provides a barrier against noise from a nearby road.

“Like a zipper, the transitions between open and closed are gradual and allow for flexible adaptation during the process of development over the years,” the studio added.

Interior spaces including the lobby contain visual references to the undulating cladding. The reception desk and floor inlays feature similar organic forms, which are also applied to large openings in the roof.

Jürgen Hermann Mayer founded his Berlin-based studio in 1996, with Andre Santer and Hans Schneider joining as partners in 2014.

The studio’s previous projects include a university building in Düsseldorf featuring flowing forms that extend to create bulging balconies and a house in Tbilsi, which is enclosed by a sculptural concrete frame.

The photography is by David Franck.