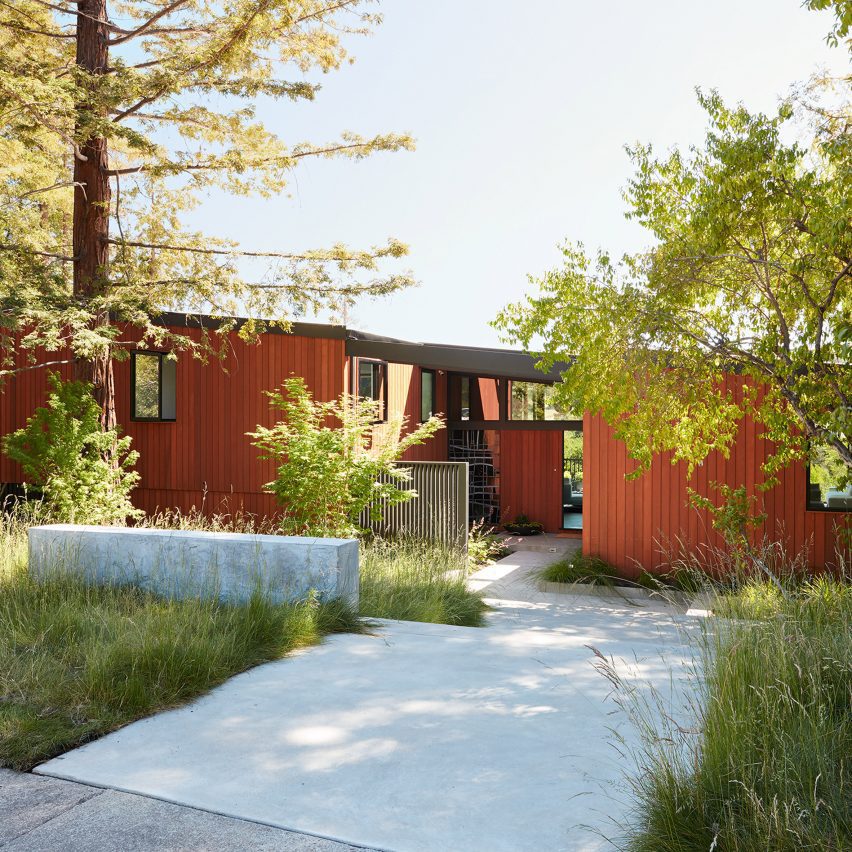 Redwood cladding and large stretches of glass feature in a 1960s house in northern California that has been updated by American firm Klopf Architecture.

The project, called Stanford Mid-Century Modern Remodel/Addition, entailed a full renovation of a 1962 dwelling on the Stanford University campus near Palo Alto. It was originally built for a professor.

The wood-clad, split-level house – designed by the late Chinese-American architect Roger Lee – was close to its original condition when it was purchased by the current owners.

“The clients were able to see beyond the dated materials and finishes, single-paned glass and uninsulated walls,” said San Francisco-based Klopf Architecture.

The overall goal was to strengthen the connection between inside and out, and provide more space for a family of four.

“As with many original mid-century modern homes, the house was scaled to the 1960s lifestyle, where rooms were smaller and openings to views were limited and tightly framed,” the architects said.

“[The clients] approached us to help them expand and update the entire home – one the family could settle into and enjoy for years to come.”

The renovation needed to align with Lee’s vision, not only because of the clients’ appreciation of mid-century modern architecture, but also because the home carries a historical designation. The renovation plans had to go through a strict design review.

For the H-shaped house, the architects ended up reconfiguring the interior and bumping out walls to add 1,100 square feet (102 square metres) to the floor plan. The project also entailed converting a carport to an enclosed garage so it could be used as storage space.

On the exterior, the team replaced redwood siding and added more glazing. In particular, windows were enlarged on the rear elevation to improve the interior’s connection to the landscape.

“We were able to broaden those views, continuing and extending on the original architecture to take full advantage of the unobstructed natural views across the rear facade of the house,” the team said.

Within the home, rooms were shifted and enlarged. The kitchen, which was formerly closed off and tucked into a corner, was opened up.

“Today the much-larger kitchen is connected to the living area, where a short wall with a cutout offers a visual glimpse into the kitchen and a handy pass-through counter for serving guests,” the team said.

“A new breakfast nook was also added to create another spot where the family can gather for casual meals.”

The living room was freshened up with a black-and-white colour palette. An original wood-burning Malm fireplace was restored, and a gas burner was installed to comply with California’s strict air standards.

“The new deck was re-envisioned as an extension of the main living room,” the architects said. “A new slatted pergola above provides the homeowners welcome relief from the hot afternoon sun.”

On the home’s top level, the team expanded two bedrooms and added a laundry room and a half-bathroom.

Also on the top level is the main bedroom suite, where small, horizontal openings were replaced with tall windows. A new corner office looks out toward the scenery.

A second staircase was added to the home, helping provide a better connection to the home’s lowest level.

Originally utilitarian in nature, the lowest floor encompassed a bathroom, laundry facilities, storage space, and an area related to a backyard swimming pool with a drain in the centre of the floor.

The ageing pool was removed, allowing the team to fully rethink the ground-level space.

“Without the need for a pool room, we were able to convert the area into a much more comfortable and functional living space with a new family room and guest suite,” the team said.

The project also entailed updates to the landscape, which was done in collaboration with Outer Space Landscape Architecture of San Francisco.

Klopf Architecture has remodeled numerous mid-century modern homes in California, including a plywood-clad, four-bedroom dwelling in Palo Alto that was built by the visionary developer Joseph Eichler.

The photography is by Mariko Reed.