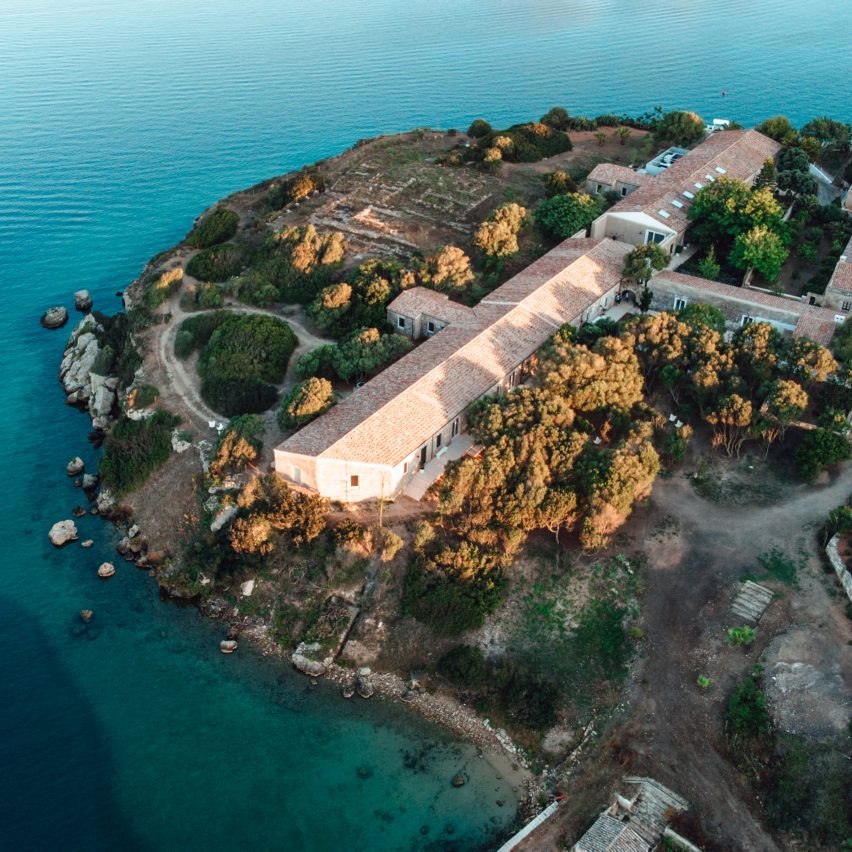 Architecture studio Laplace and landscape architect Piet Oudolf have transformed and repurposed a collection of historic buildings on Isla del Rey in Menorca into an art centre for the Hauser & Wirth gallery.

Named Hauser & Wirth Menorca, the gallery is located on a small island off the coast of Mahon in the south of Menorca. It is housed within a formerly derelict hospital facility that was built and occupied by the British Navy from the early 1700s.

A two-year conservation project saw the three buildings converted into a 1,500-square-metre cultural hub. The site is complete with eight exhibition spaces, a restaurant, a gallery shop, a sculpture trail and biodiverse gardens.

Laplace explained that the studio looked to preserve the memory of the existing building by highlighting its “scars” and adapting the structure to appear as though it was always there.

“We wanted to celebrate the history of the building and bring value to all its scars,” Laplace co-founder Luis Laplace told Dezeen.

“We have to keep the building’s integrity and work around the context. We have been working for a long time against the white-cube sort of space.”

Long, linear exhibition spaces occupy the two largest buildings. These are adjoined at the centre by a contemporary courtyard that marks the entrance to the galleries.

The studio used traditional materials and techniques throughout the restoration, incorporating local masonry, a terracotta-tiled roof and terrazzo floors that were constructed using locally sourced stone.

The interior of Hauser & Wirth Menorca features original wood beams which were restored and whitewashed, while its walls were not rendered completely smooth but instead reveal the stone masonry beneath.

Large windows punctuate the walls and ceilings of the gallery space, creating a play of shadows on the stone walls.

“I did a lot of research on naval architecture here in Mahon, I looked at how to resolve things from trusses, a window, a door, a gate, to even a bench,” Laplace said.

“I didn’t want it to be a pastiche – I wanted it to be respectful to the local elements. It was very key to respect the naval history.”

Laplace has previously added two new wings to a collection of historic farm buildings in Somerset, England to create another Hauser & Wirth gallery.

“It reminds me of Somerset, where [Laplace] created a courtyard between the old and new building; here, it’s the same idea,” Laplace co-founder Christophe Comoy told Dezeen.

“[Laplace] created breathing spaces which are key in this type of restoration project, to respect what’s existing and also to improve the circulation to adapt it to the needs of today.”

As Menorca is a UNESCO Biosphere Reserve – an area that aims to promote solutions that help safeguard biodiversity – a purpose-built reservoir that collects rainwater from the roof for irrigation across its gardens was added to the building to make it more sustainable.

The gardens and landscape surrounding the cultural hub were designed by Piet Oudolf, who also created the landscaping for Hauser & Wirth Somerset.

His landscape design for Hauser & Wirth Menorca incorporates native plants, such as purple agapanthus amongst other perennials and grasses. It also preserved a collection of existing olive trees at the rear of the site.

A strict geometry sees plant beds organised in regular blocks around squared paved slabs that lead visitors around the centre, taking them between works by artists including Louise Bourgeois, Franz West, Eduardo Chillida and Joan Miró.

Hauser & Wirth Menorca will host temporary exhibitions and artists’ residences, alongside a number of community workshops and artist-led programmes that centre on education and sustainability.

Recently Hauser & Wirth displayed monumental sculptures by Eduardo Chillida at the gallery’s Somerset location in the southwest of England.

Photography is by Daniel Schäfer unless stated otherwise.