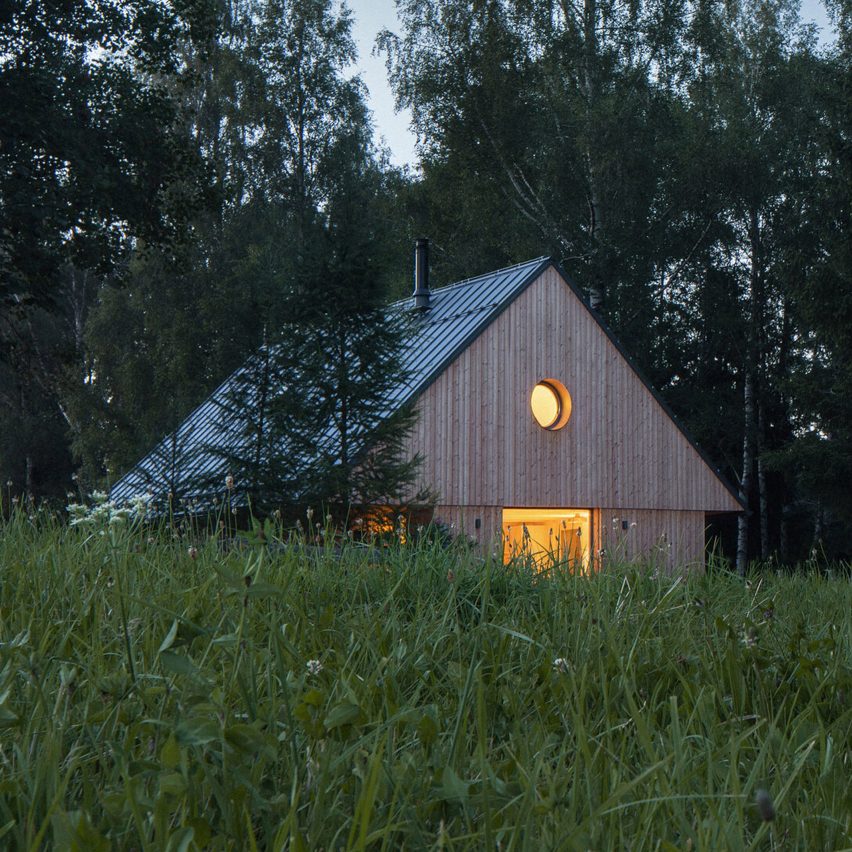 Timber interiors and larch cladding reference the surrounding Bohemian Forest at this pared-back cabin in the Czech Republic, designed by French practice Les Archinautes in collaboration with local practice 3AE.

Overlooking Lipno lake close to the Czech Republic’s border with Germany and Austria, the cross-laminated timber (CLT) cabin was designed to provide a rest stop for people who come to ski and hike in the nearby mountain ranges.

Informed by a wooden dwelling that once stood on the site, the cabin’s simple design drew from the architecture typical to the area, which Lyon-based Les Archinautes describes as “wooden, compact and cozy.”

“The morphology of the house stands on several principles of Bohemian Forest architecture: rectangular floor plan, compact shape, orientation along the contour line, creation of a covered porch and more pronounced articulation of the gable,” said the practice.

Clad in thin larch planks, the cabin is raised on a low wooden platform, which extends to create a terrace along two sides of the home sheltered by the oversized eaves of the roof.

Seeking to bring the surrounding forest into the cabin as a “material, smell, and colour,” the CLT structure has been left exposed throughout the interiors, which are organised to capture views of the landscape. 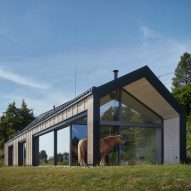 The focal point of the cabin is the ground floor living and dining space, where a large table, kitchen counters and concrete fireplace sit underneath wooden beams and overlook the lake through a large square window.

Alongside this space, the main ground-floor bedroom and two smaller first-floor bedrooms tucked beneath the roof capture glimpses of the forest and mountains through skylights and small, round windows in each gable end.

“The view of Lipno lake, with two major peaks in the background, becomes the main point of the project, centred around the dominant gabled square window facing toward the lake,” said the practice.

“Wooden walls in the interior create a pleasant and warm atmosphere. The exposed wood is painted with hard wax oil, white pigment and a UV filter, ensuring the wood retains its fresh colour for decades to come,” it continued.

Complementing the exposed CLT walls and ceilings, the minimal interiors are finished with oak flooring, simple light fittings and white tilework in the bathrooms.

Photography is by Petr Polak.