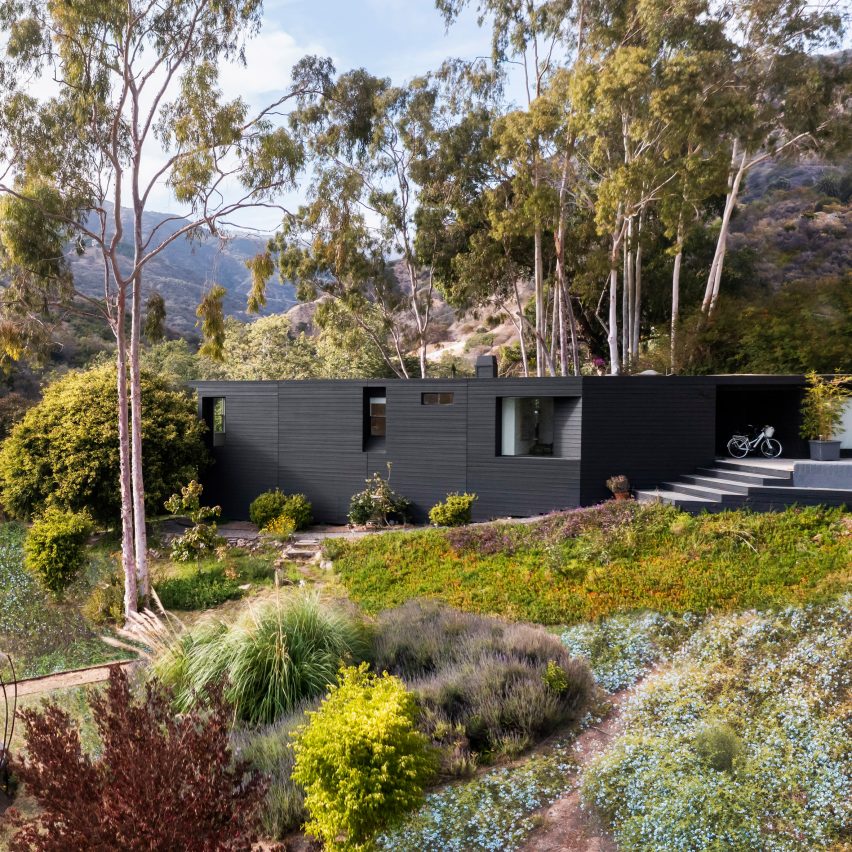 California architect Lorcan O’Herlihy, founder of the studio LOHA, has transformed a neglected 1990s house in southern California into a family residence with framed views of mountainous terrain.

Nestled amongst a cluster of trees on a Malibu hillside, the Highgrove House was purchased by O’Herlihy and his wife, Cornelia, in 2010.

At the time, the circa-1998 house was structurally sound but in a state of disrepair. Both the interior and exterior were in need of a makeover.

Over the years, the couple chipped away at renovating the two-storey house – a project described as a “labor of love”. The work included a kitchen remodel, new decks and the restoration of hardwood floors.

In 2020, the couple decided to embark on a major overhaul and create a home that “sparks creativity”. Guiding concerns included embracing the landscaping and retaining original building elements.

“It’s important to keep the existing structure when possible because it cuts down the ecological footprint of construction,” said O’Herlihy.

“The key is to strategically design within those parameters.”

O’Herlihy added a small room on the lower level but otherwise kept the home’s footprint intact. New materials were incorporated, both inside and out.

“The material choices are equally contemporary and timeless against the backdrop of the southern California mountains,” the architect said.

In some areas, the screen sits 18 inches (46 centimetres) from the home’s perimeter wall. The distance enabled the architect to create deep-set windows, further reducing solar gain and adding an artistic touch to the exterior.

In select areas, ordinary casement windows were replaced with mullion-free, plate-glass windows. The glazing offers unobstructed views of the landscape.

A glazed, sliding door opens onto an L-shaped terrace, where the family likes to relax and take in the scenery.

Within the 2,500-square-foot (232-square-metre) home, the layout was slightly modified.

The upper level holds the shared spaces, along with a primary suite and a bedroom. The lower levels contains two additional bedrooms.

Stairs were relocated to make the living room larger, flex space was added on the lower level, and a bathroom was enlarged. A garage was converted into a kids’ space.

The home is furnished with contemporary decor, including chairs designed by Le Corbusier.

LOHA, or Lorcan O’Herlihy Architects, has developed an extensive portfolio since its founding in 1994. Notable projects include a student apartment complex that steps down an LA hillside and a row of sculptural, metal-clad homes that explore possibilities for the “small lot subdivision typology”.

The firm made the longlist for architecture studio of the year in the 2022 Dezeen Awards programme. In 2021, Lorcan O’Herlihy received the coveted Gold Medal from AIA’s Los Angeles chapter.

The photography is by Here and Now Agency (HANA).