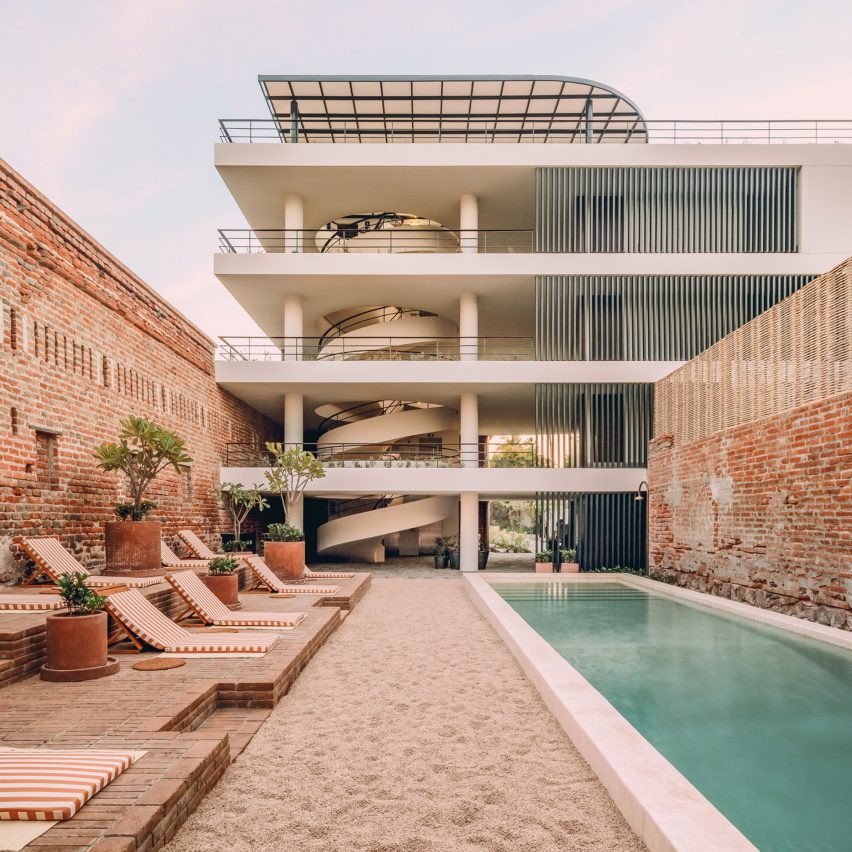 Historic brick walls and a spiral staircase feature in a Baja Peninsula hotel that was designed by Mexican firm Max von Werz Arquitectos to embrace its seaside context.

The Baja Club Hotel is located in the historic centre of La Paz, a coastal city in Mexico‘s Baja Peninsula. The 32-room property, which is owned by the boutique hotel company Grupo Habita, was longlisted for a 2021 Dezeen Award.

The 3,623-square-metre project entailed the adaptive reuse of a colonial-style villa dating to 1910 and the construction of a new, four-storey extension. The site was once used for oyster pearl harvesting.

“Baja Club’s central question is the age-old one of how to build on a site’s rich history and character, but at the same time update it in order to give it a new lease on life,” the team said. “Our response is a nuanced one.”

For the new addition, the team created an L-shaped building – the same shape of the original villa.

The two buildings are loosely organised around a central courtyard that is dotted with fragrant frangipani trees. Tranquil gardens and patios were incorporated into the perimeter of the site.

The extension – which encompasses guest rooms, a spa and a rooftop bar – is meant to look modern yet be in “respectful dialogue with the old villa.” Stepped massing helps lighten its visual appearance.

“The tiered massing of the extension reduces its visual bulk and provides generous terraces enjoying panoramic views of the Bay of La Paz, once the setting of John Steinbeck’s novel The Pearl,” the team said.

Certain design elements take cues from the hotel’s nautical context. Horizontal lines, curved timber partitions and large built-in tables draw inspiration for the nearby Sea of Cortés, which was coined the “aquarium of the world” by French explorer Jacques Cousteau.

The addition’s upper levels can be accessed by elevator or by a helical staircase, which sits at the meeting point of the extension’s two wings. The stair is meant to serve as a sculptural element.

“Due to its comfortable tread-to-riser ratio, it sweeps visitors up to the upper guest-room levels and the rooftop sunset bar with an ease that disincentivises the use of the elevators,” the team said.

The site also has numerous water elements that help cool outdoor spaces – an important factor given the region’s hot and dry climate.

Throughout the hotel, the team incorporated finishes and decor – such as hand-finished carpentry, blown-glass lamps and Talavera tiles – that draw upon local culture and the site’s original detailing.

“Baja Club Hotel aims to give a modern twist on Mexico’s rich tradition of colours, textures and craftsmanship,” the team said. “By using local materials in a fresh and streamlined manner, it creates a bridge that ties together the identity of the hotel’s old and new components.”

For the landscape design, much of the existing vegetation and architectural features were retained. An old pergola in the courtyard was restored and is now used as a dining area. The property’s original brick walls were preserved in their entirety.

In one of the perimeter spaces, the team created a new swimming pool lined with brick terraces that continue the language of the historic property walls. Chukum, a type of Mexican stucco, was used in the pool area.

“For us, using local craftsmanship was a way to anchor the project in its locale, to achieve a certain authenticity and to build a strong connection with the history and identity of the place,” the team said.

Other properties run by Grupo Habita include the Círculo Mexicano, a hotel in downtown Mexico City that is housed in a 19th-century building, and The Robey Hall in Chicago, which was formerly a hostel called The Hollander.

The photography is by César Béjar.