Architects Mauricio Pezo and Sofia von Ellrichshausen have completed a tall and narrow concrete house, which perches on a cliff facing a sea-lion reserve on Chile’s Coliumo Peninsula. 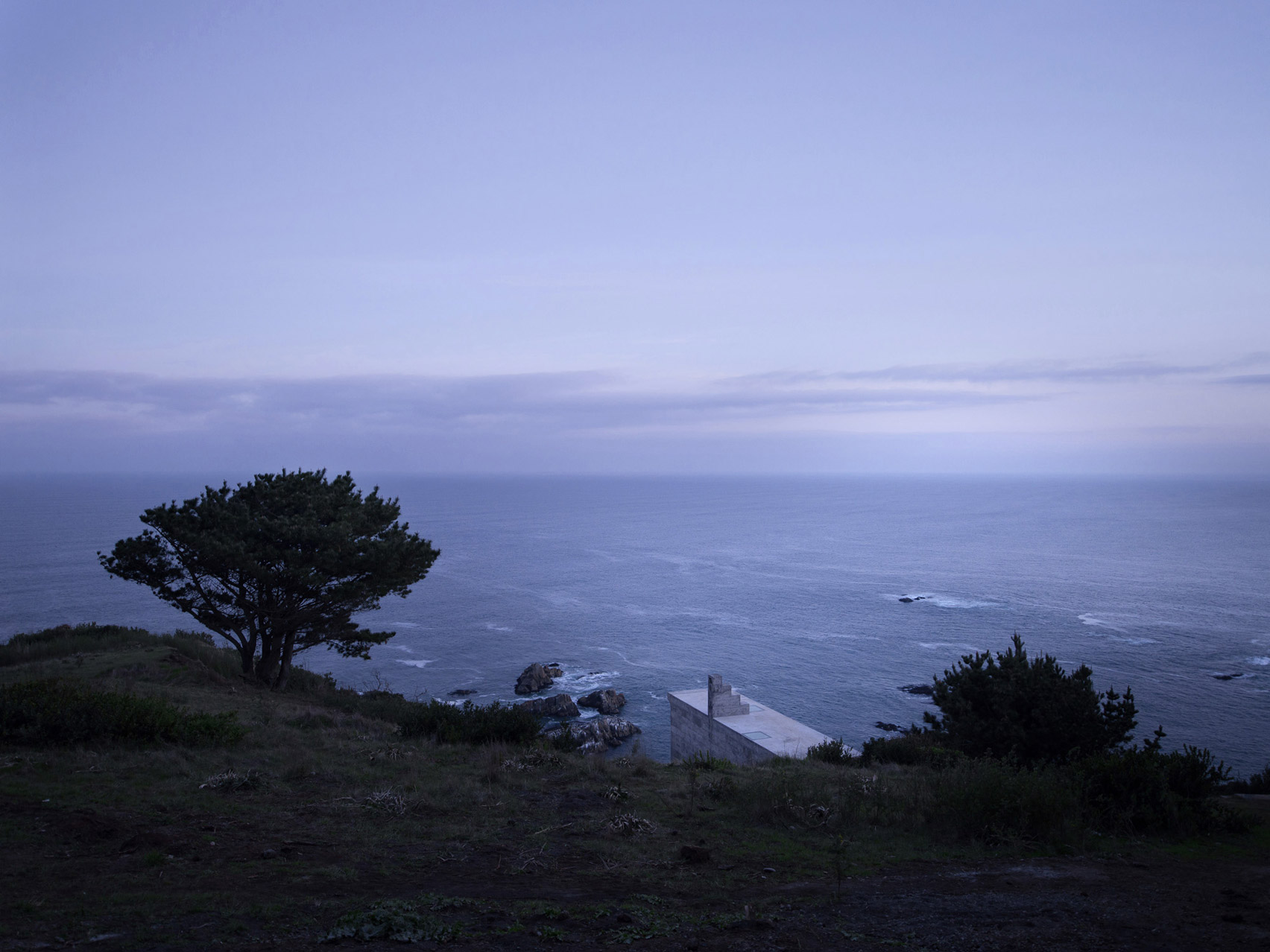 Pezo and Von Ellrichshausen’s studio, which is based in the nearby city of Concepción, designed Loba house for a plot facing down the cliff.

From its position on the peninsula’s exposed western coast, Loba house also has a view towards the nearby Poli House Cultural Centre, which the duo completed in 2005.

The compact building has a footprint of just 70 square metres, leading the architects to describe it as “a cottage”, due to its scale being “more than a hut but less than a house”. 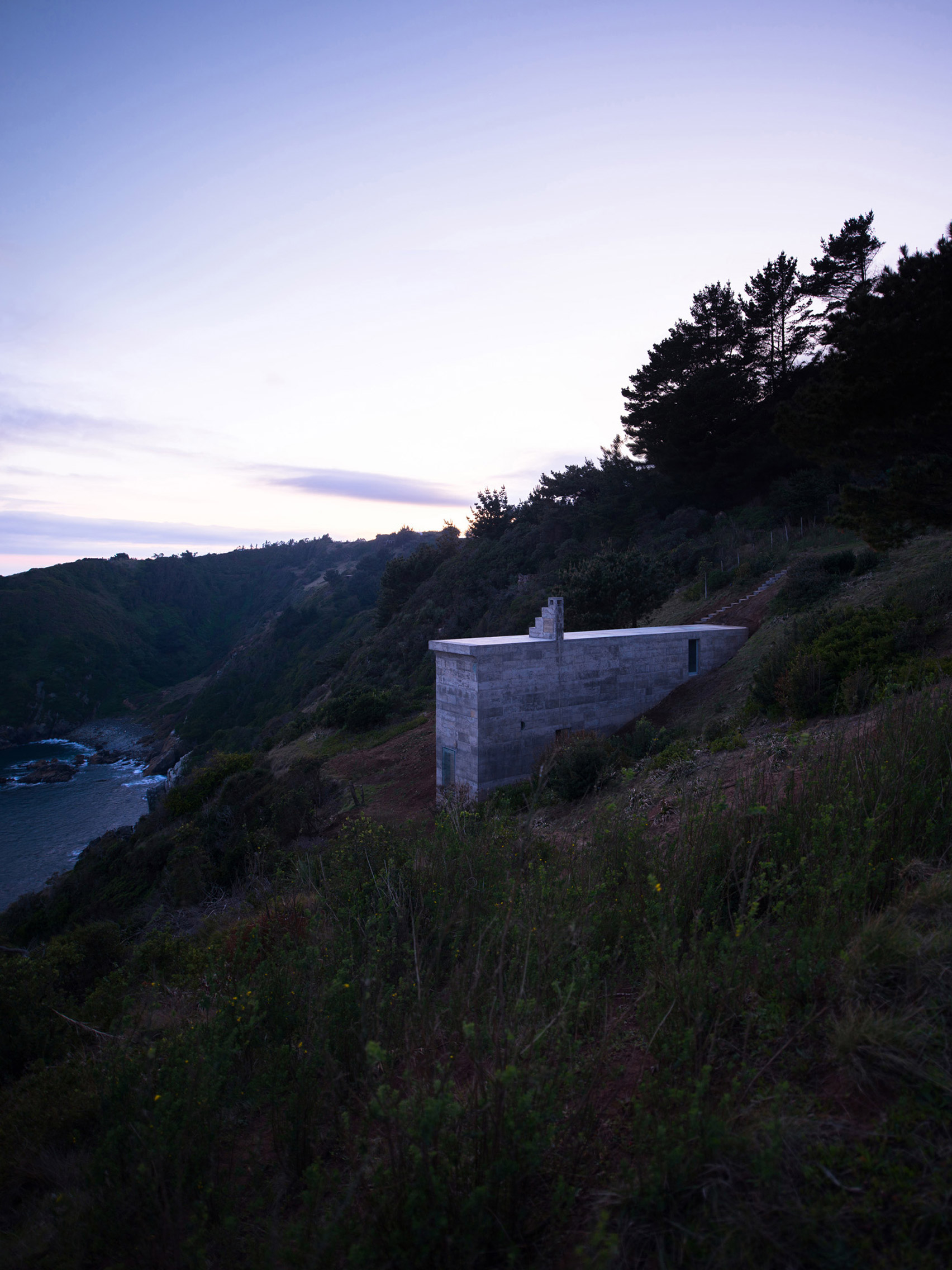 The monolithic structure features predominantly solid concrete elevations, with its elongated proportions lending it the appearance of a wall emerging from the hillside.

“In its under-dimensioned thickness, in its narrow and tall proportion, the building could be read as an inhabited wall that runs perpendicular to the natural topography,” said the architects. 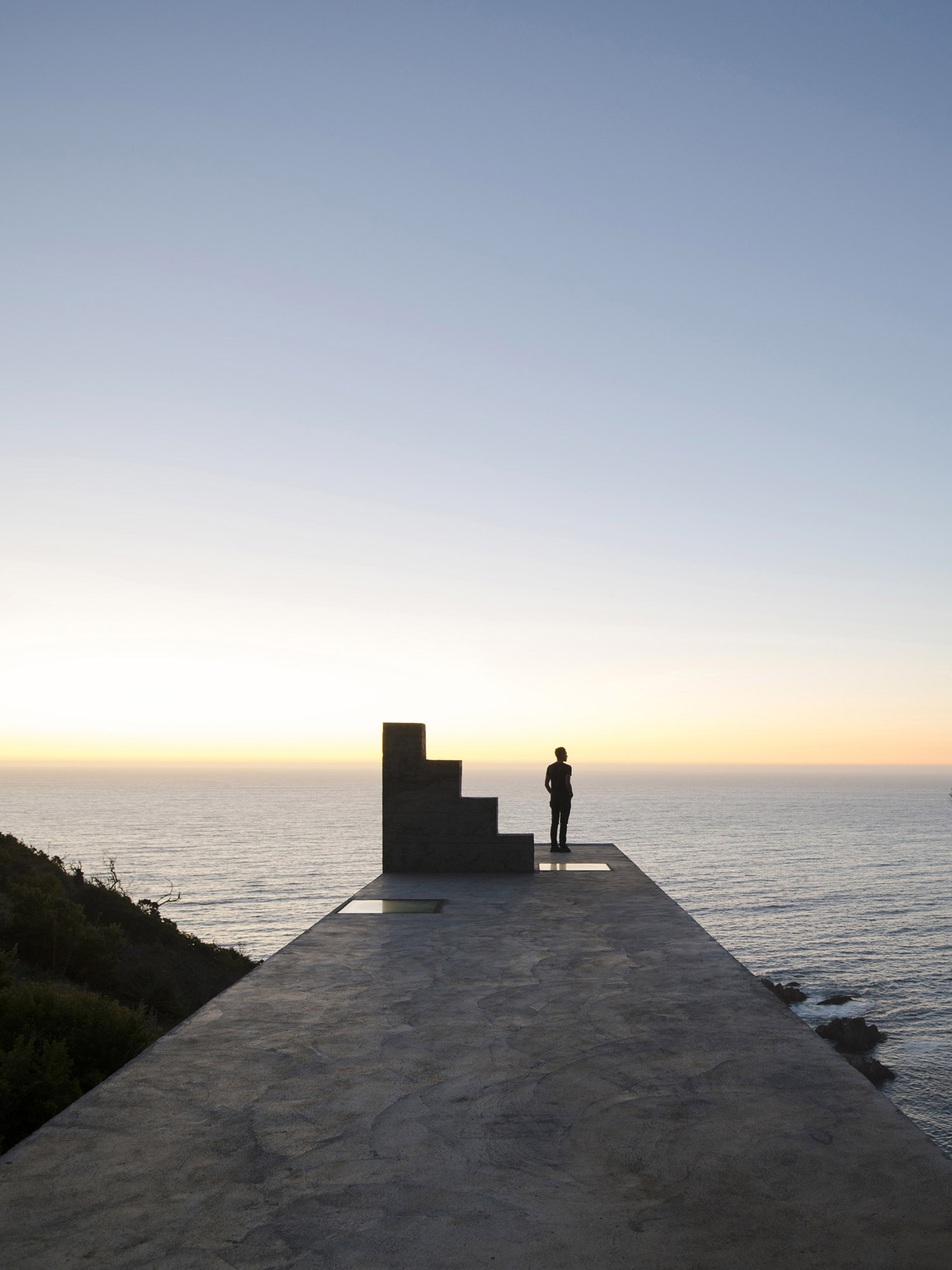 The building’s horizontal roof forms a terrace that stretches out towards the ocean, and is interrupted only by a concrete chimney with a stepped profile.

The side walls follow the sloping terrain and contain a sequence of six stepped platforms within a single room that is interrupted by three concrete columns and two bridges. 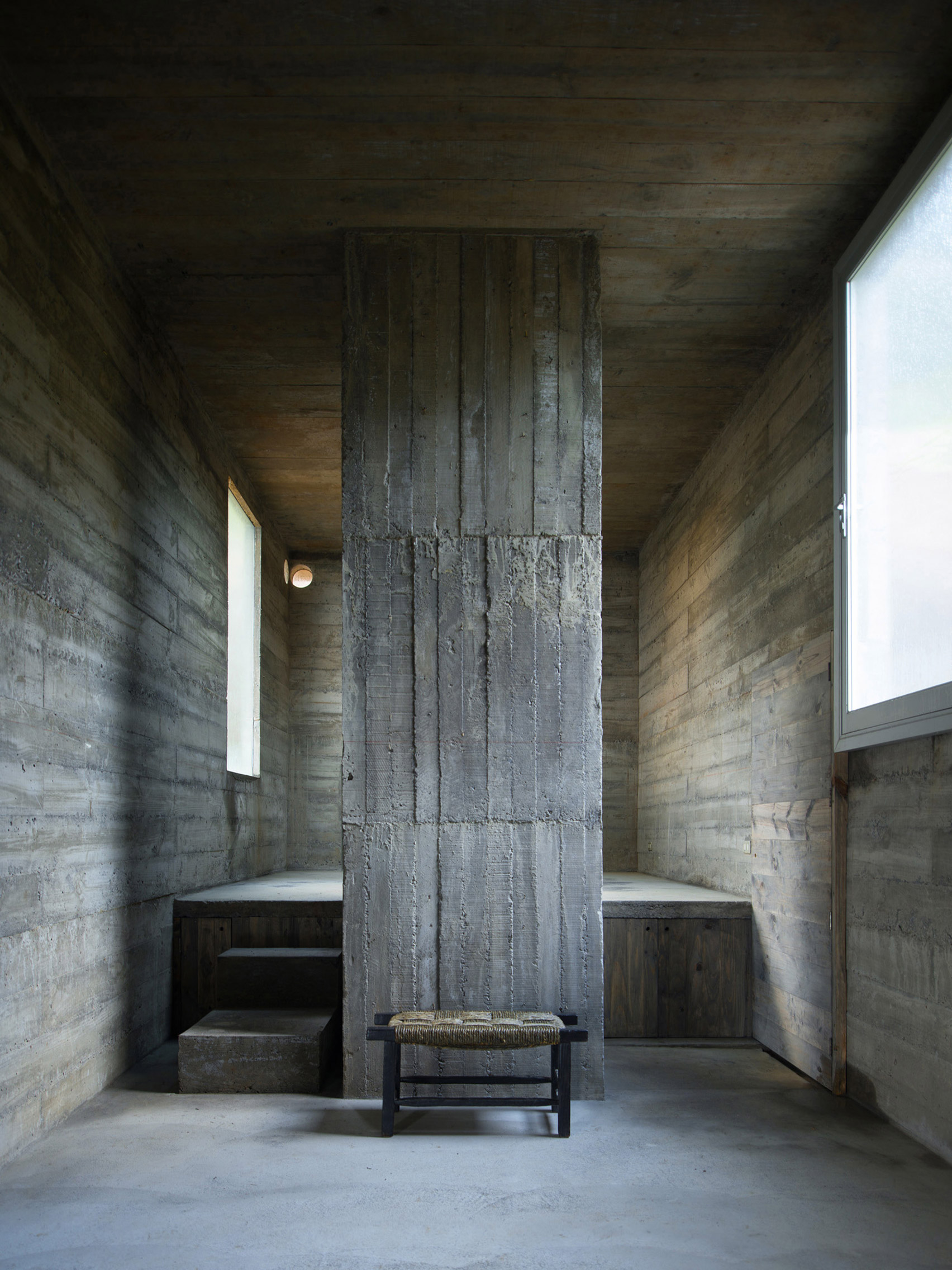 The beds are placed on the upper levels beneath the lowest section of the roof, while the spaces further down accommodate the main living areas.

Amenities including the toilet, kitchen and hearth and integrated into the large concrete columns, and storage is built into the spaces beneath some of the platforms to maintain an uncluttered aesthetic. 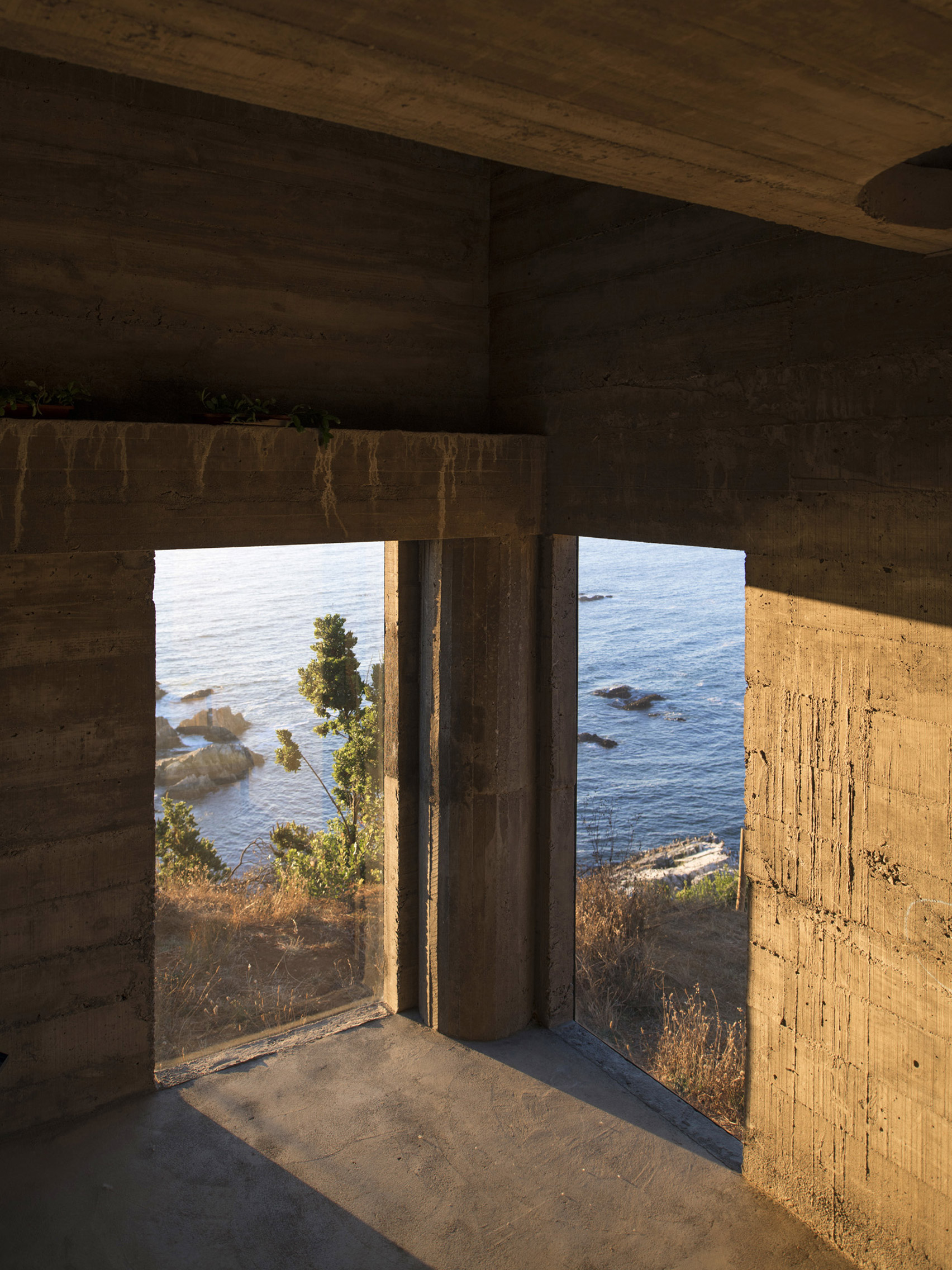 Carefully positioned skylights allow natural light to illuminate the house’s rough, board-marked concrete surfaces, while some half-moon-shaped perforations in the walls direct sunlight into the interior at certain times of day.

Other openings in the walls frame specific views, with a pair of windows separated by a round column at the base of the house providing a panoramic vista of the coastline from a living area.

The building’s monolithic character is emphasised by strong geometric forms, including the circular skylights and an opening in one of the bridges that allows it to be accessed by way of a ladder. 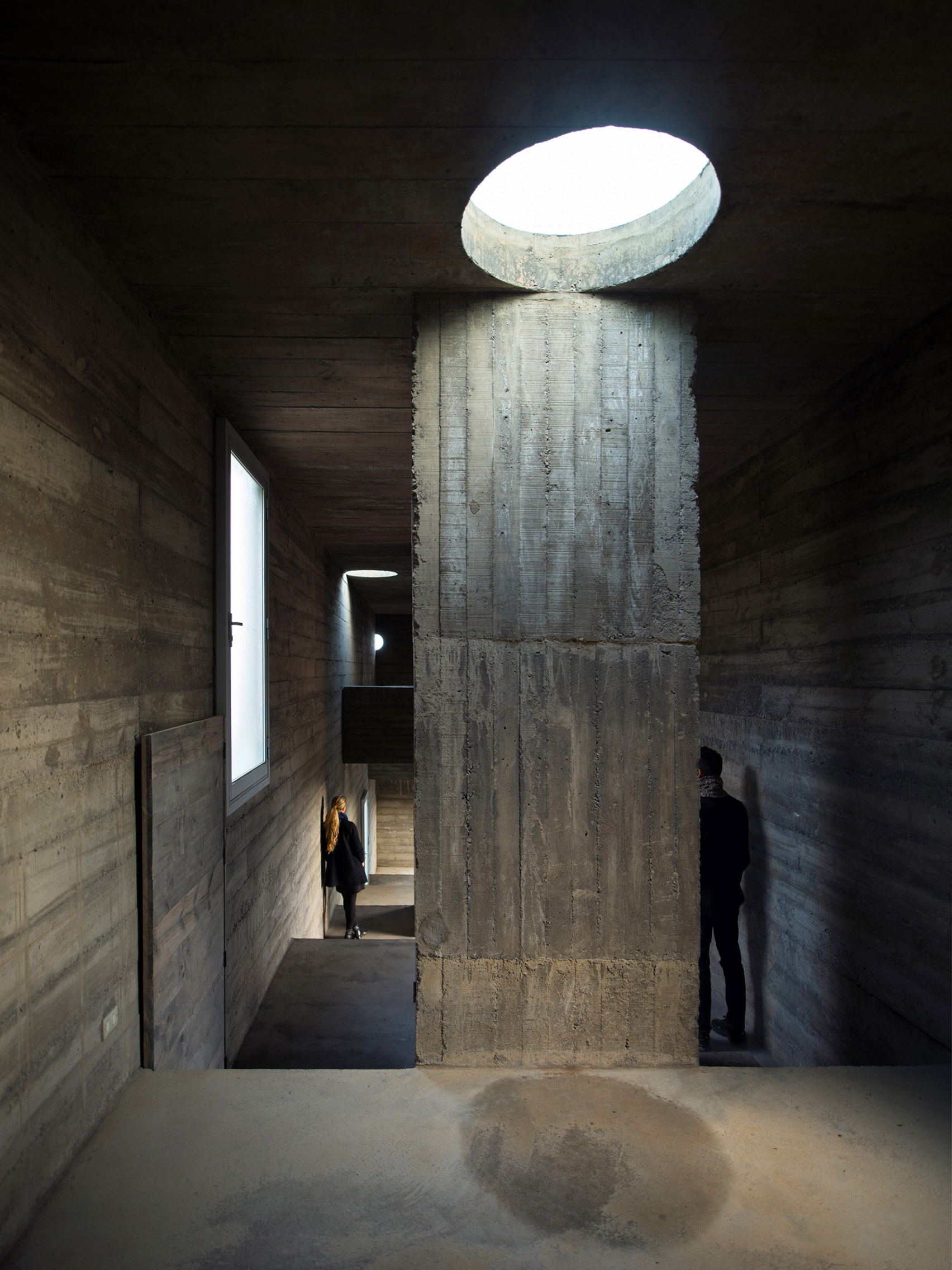 The studio is known for its use of striking geometric forms, which it also employed when creating a semicircular house that curves around a paved courtyard, and a top-heavy house nestled beside a lagoon.

The couple’s own home and studio on the edge of Concepción features a seven-storey concrete tower that emerges from a horizontal plinth and is punctured by square windows.