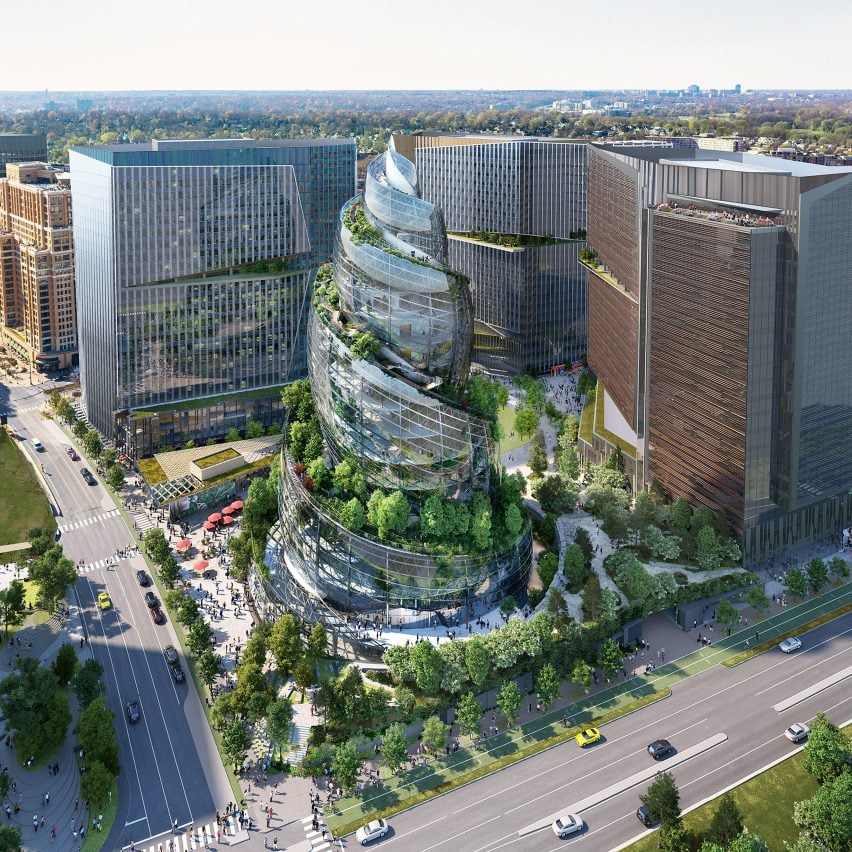 Named The Helix, the glass spiral tower will be part of a complex of three office buildings that will make up Amazon HQ2.

Outdoor pathways will spiral up the outside of the main Amazon HQ2 building for employees to enjoy walking up and down a hill covered in woodlands.

NBBJ, which also designed the dome-shaped greenhouses for Amazon’s Seattle headquarters, said it was briefed to create an “environment that prioritises healthy work”.

Along with the rooftop hill climb, The Helix will also include indoor gardens, an artist-in-residence scheme and a meeting centre that has capacity for 1,500 people. NBBJ said Amazon will open The Helix and its green spaces to the public on certain weekends.

Shops, restaurants and a farmers market will be located in a plaza at the base of the glass spiral.

NBBJ is aiming for a Gold LEED environmental certification for HQ2 and plans for the complex to be powered entirely by renewable energy from a solar farm in Pittsylvania County.

The green spaces will be watered by rainwater runoff and employee bike parking for 950 bicycles will connect to a quarter of a mile of protected cycling lanes. There will also be electric vehicle charging points on site.

NBBJ told Dezeen it hopes to win planning approval for Amazon HQ2 this year and start construction in 2022.

Amazon has also commissioned ZGF Architects and James Corner Field Operations to renovate a 2.5-acre park for the city, which will start construction in 2023.

Virginia lobbied hard for Amazon to build its HQ2 project there when the technology company promised to invest heavily in infrastructure and culture in its chosen location. In 2018 Amazon suggested it would split the headquarters between Virginia and New York, before cancelling its New York plans in 2019.

Along with the Seattle Amazon headquarters, NBBJ has previously designed offices for Google in California and for Tencent in Shenzen.