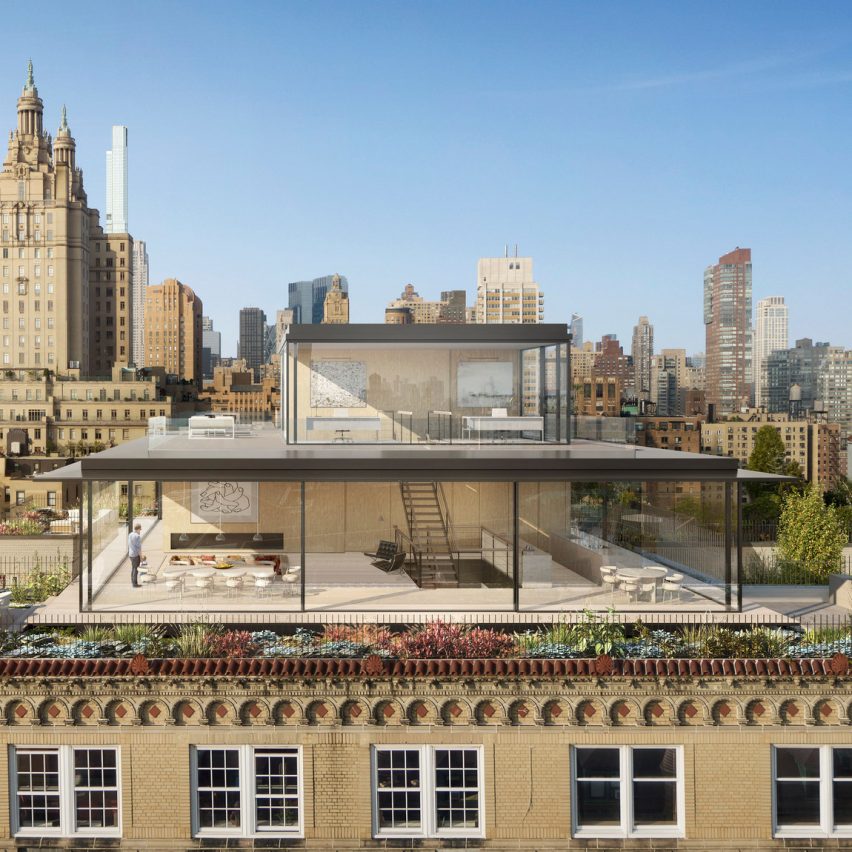 Architect and designer Neri Oxman and her husband, the hedge fund manager Bill Ackman, have been told to modify plans drawn up by Norman Foster for a glass penthouse on a 1920s building in New York.

Oxman and Ackman want to demolish the existing one-storey, pink stucco penthouse on the roof of the Upper West Side block and replace it with a two-storey modernist structure.

The glass-and-steel, stacked-box design was produced for the couple by British architect Foster, founder of the UK’s largest architecture firm Foster + Partners.

After three hours of discussion at a meeting last month, in which Oxman, Ackman and Foster all participated, New York City’s Landmarks Preservation Commission (LPC) asked for the height of the proposed new penthouse to be reduced.

Concluding the hearing, LPC chair Sarah Carroll said the proposed penthouse’s “materials and design do not detract from the building below by virtue of its simplistic and carefully designed nature” but noted concerns about its visibility.

“I would suggest that we take no action today and ask the applicants to continue to study this project,” she said.

“I think we have a lot of support and I think you’re in the right direction and this is just a matter of continuing that process, thinking about how you can really fulfil the design intent […] of this glass house on the roof by sinking it down, lowering it, maintaining a more sort of horizontal quality.”

The site is next to the New York Historical Society and close to Central Park, forming part of the Upper West Side-Central Park West Historic District, over which the LPC has jurisdiction.

Appointed by the New York City mayor, the LPC is responsible for regulating sites and buildings it deems to have architectural, historical or cultural significance and is the largest municipal preservation agency in the United States.

Among concerns raised at the meeting by local residents and commissioners was the visibility of the new glass penthouse from surrounding areas.

Addressing the meeting, Foster argued the design was “very respectful, it’s very gentle, but it is of its age”.

Describing his studio’s approach to the project, he added: “History of any building of architecture is the layering of history, and each period makes its own imprint and the quality of that imprint, the way in which it defers to the original building, is important and that’s regardless of the scale.”

Speaking later on in the Zoom call, Oxman claimed that “there is an incredible amount of value in the environmental, structural and indeed social implications for this project”.

She called upon those in the meeting – many of whom were residents of the building who had expressed opposition to the project – “to separate between issues that relate to preservation in its purest form, and issues that relate to personal, or perception of, personal wealth associated with an individual who so cares for the city and the world, and who brought me into his life and for which I’m so, so grateful”.

“This has been more than a committee hearing for me, this is a lesson that I will take with me for the rest of my life,” she added.

Belle Horwitz, a long-time resident of the apartment block, implored the commission to reject the “unprecedented, deliberately discordant project whose sole objective is in effect to draw attention to itself”.

Another, Mary Breasted, said it “looks like a Malibu beach house that got blown onto our roof”.

However, others who spoke at the meeting were far more complimentary, with one Upper Park West resident saying he thought the design was “phenomenally beautiful”. 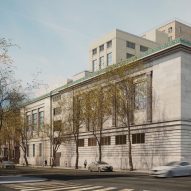 Ackman told the hearing that around 85 per cent of the building’s 90 inhabitants are supportive of the project.

“Many people in my industry have decamped to Miami and Palm Beach and Austin, Texas, and other places because of the tax burden of the city and here we are replanting roots on the Upper West Side in a beautiful, 3,000-square-foot glass box that Norman Foster has designed, which I think is a great asset for the city and if LPC disagrees I respect the decision and I guess we pack our bags,” he said.

The businessman admitted to having made a “major commitment” to the neighbouring New York Historical Society, but dismissed suggestions he had used his wealth to try to push through the project as “offensive and absurd”.

The apartment block itself, 6-16 West 77th Street, stands at 16 storeys with a tan brick facade, having been designed by Nathan Korn and completed in 1928.

Ackman bought the apartment at the top of the building, including the existing pink penthouse, which is part of the original design, for $22.5 million in 2018.

Expected to take 18 months to build, if the project goes ahead it will be the first time Foster has designed a private residence in New York.

Ackman runs hedge fund Pershing Square Capital Management. Oxman is a former professor at the Massachusetts Institute of Technology known for her pioneering work in the field of Material Ecology. She currently runs her own lab called Oxman in Manhattan.

She was a contributor to Dezeen’s recent Dezeen 15 series marking our 15th anniversary.

The images are by Foster + Partners.