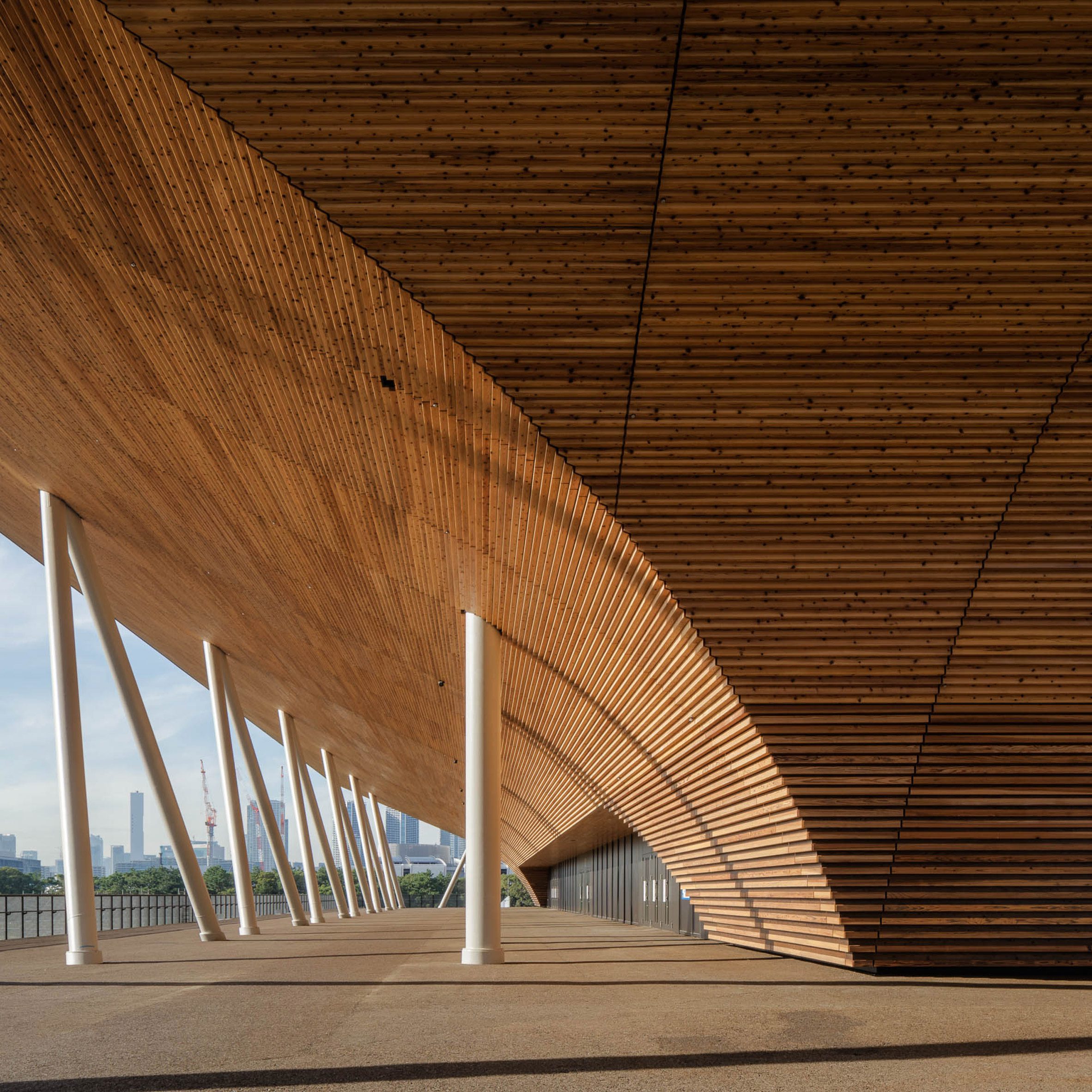 One of the largest timber-framed roofs in the world spans 90 metres over the arena of the Ariake Gymnastics Centre in Tokyo, designed by Japanese practice Nikken Sekkei for the delayed 2020 Olympic and Paralympic Games.

The structure, located a short distance from Tokyo’s centre in Koto City, was originally unveiled in 2019 and has been the location for artistic, rhythmic and trampoline gymnastics as well as the wheelchair sport Boccia.

Located next to a canal on the site of a former timber storage area, the centre is a celebration of wood and its centrality to traditional Japanese architecture. Around 2,300 cubic metres of sustainable timber are used throughout the building.

“Based on the architectural concept of a wooden vessel floating in the bay area, timber is used wherever possible, specifically in the roof frame structure, facade, spectator seats and exterior walls, while carefully considering the characteristics of wood in each application,” said Nikken Sekkei.

From its base, the centre’s inverted pyramid form sweeps upwards to shelter an external concourse below, expressing the shape of the raked seating within with a stepped cladding of horizontal timber planks.

Referencing a traditional engawa, a verandah-like space found in Japanese architecture, the concourse is defined by two rings of steel supports: one vertical surrounding the entrances in the centre and another angled supporting the edge of the roof structure.

“By positioning the circulation concourse on the outside of the building and creating an open and broad approach space, the design attempts to avoid the impenetrable exterior typically found on large-scale sports facilities,” explained the practice.

The roof structure is formed by a series of large, arch-shaped glue laminated timber beams made using larch from the Nagano and Hokkaido prefectures, spanning a distance of 90 metres between the steel columns of the centre.

“We adopted a simple structure that uses single members of large glue-laminated timber with high heat capacity, rather than trusses containing a number of small members to achieve both fire resistance performance and structural stability,” Nikken Sekkei said.

Steel cables attached to this roof structure support the arena’s lighting rig, above the glulam stands that can accommodate 12,000 spectators. This number will reduce when the temporary seating is removed following the 2020 Olympic Games.

A corrugated steel roof covers the structure, following the form of the timber beams below to create the arena’s distinctive undulating roof shape.

The centrepiece of the Tokyo 2020 Olympic Games, the Japan National Stadium by Kengo Kuma Associates with Taisei Corporation and Azusa Sekkei Co also incorporated an extensive use of timber, with its roof structure made from steel and laminated larch and cedar trusses.

Both of these structures and more featured in Dezeen’s roundup of the most architecturally significant buildings in the Tokyo 2020 Olympic Games, which took place during summer 2021 due to the coronavirus pandemic.

The images are courtesy of Nikken Sekkei.