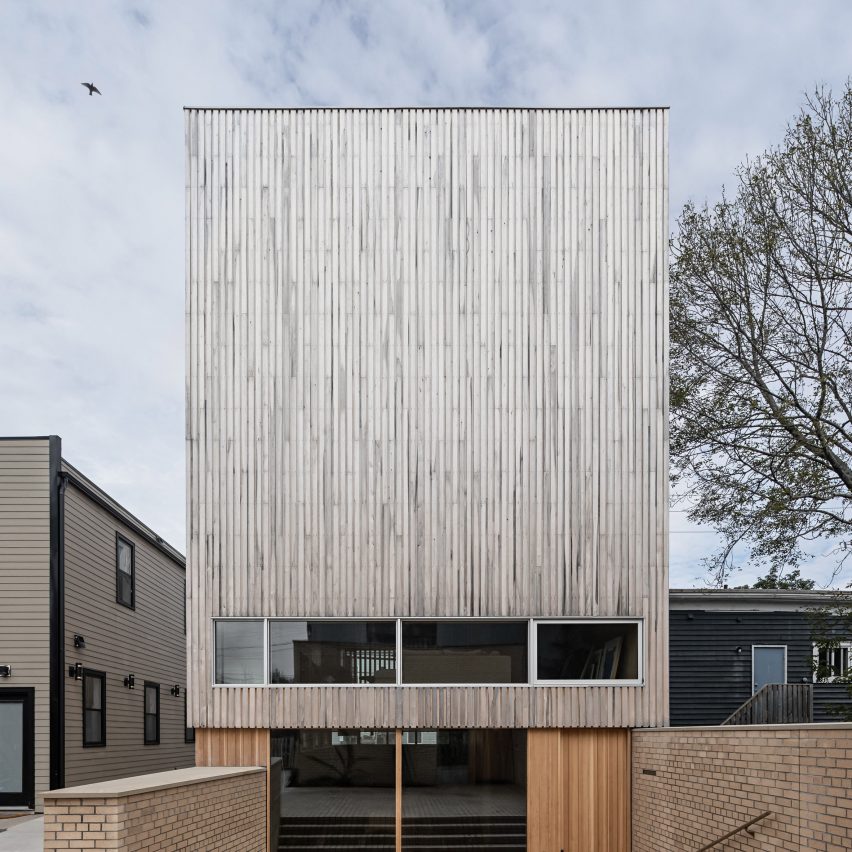 The founder of Canadian studio Omar Gandhi Architect has built a brick and cedar-clad home for himself and his family in Halifax, Nova Scotia, with interiors lined in white oak.

The house for Omar Gandhi, his partner and their son is located in the historic North End of the city, and was built on a disused lot.

The building’s lower floor was also intended to serve as a studio space for the architecture firm, but it grew too quickly, so is now used as a centre for community projects.

Its form comprises a two-storey, eastern white cedar-clad box atop a ground floor constructed from brickwork. The brick structure is continued as a thin vertical element on the side close to a neighbouring dwelling.

Facing the street, slats of cedar are arranged to form a screen across the large windows, to protect the occupants’ privacy.

A rounded corner guides visitors to the main entrance at the rear, via a driveway, then a courtyard and stairway paved in the same brick as used for the walls.

“The brick podium is composed of one of two natural clay brick tones used in the region – buff, which is predominantly used for ordinary building stock including multi-unit housing in the North End,” said the firm.

Inside, a pill-shaped closet clad in raw steel provides a buffer between the studio space and the corridor to the residence upstairs.

Up the first flight, more raw steel forms a nine-foot-tall door that hides a brick and wood-lined powder room.

On this level is the open-plan kitchen, dining and living area, where white oak panels cover the walls and ceiling, and planks form the flooring.

The kitchen is located at the front of the house, partially concealed from view by the cedar slats.

White millwork forms cabinetry and conceals appliances along one wall, and continues into the living space to create additional storage. 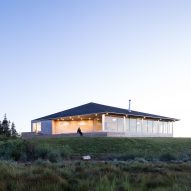 A wooden kitchen island and large dining table each have one rounded end, echoing the pill-shaped feature in the entry, and together span 30 feet (nine metres) in length.

In the living area towards the back, a marble-clad fireplace stack interrupts the white millwork.

The ceiling here angles gently upwards, before turning almost vertical at the end of the building to create a double-height slither below a skylight.

“Intensive lighting studies and parametric modelling were used to form find the lightwell shape to ensure optimal natural lighting conditions throughout the length of the living space,” the studio said.

This lightwell is overlooked by one of two bedrooms on the upper floor, which also contains two bathrooms with full-length skylights and contrasting monochrome colour schemes.

There’s also a roof space, which includes a small sitting area and garden on the street side of the house.

Stairwells linking these storeys are lined with more white oak panels, and include custom-designed bronze brackets that support the handrails.

Altogether, the materials used both inside and out of the OG House create a cohesive palette that feels minimal, yet warm and inviting.

“Upon reaching the end of construction, the cedar-clad facade had already lost much of its vibrancy and faded gently to resemble much of the weathered wood textures of the neighborhood, all while maintaining much of its curious spirit,” said the firm.

Omar Gandhi Architect and is well-known for designing private residences across Nova Scotia, although many are in much more rural locations.

They include a low-lying home on the rugged coastline, a cabin atop a remote bluff, and a hilltop house overlooking Halifax.

The studio, which has offices in Halifax and Toronto, also recently completed an accessible viewpoint at Peggy’s Cove lighthouse.

The photography is by Ema Peter.