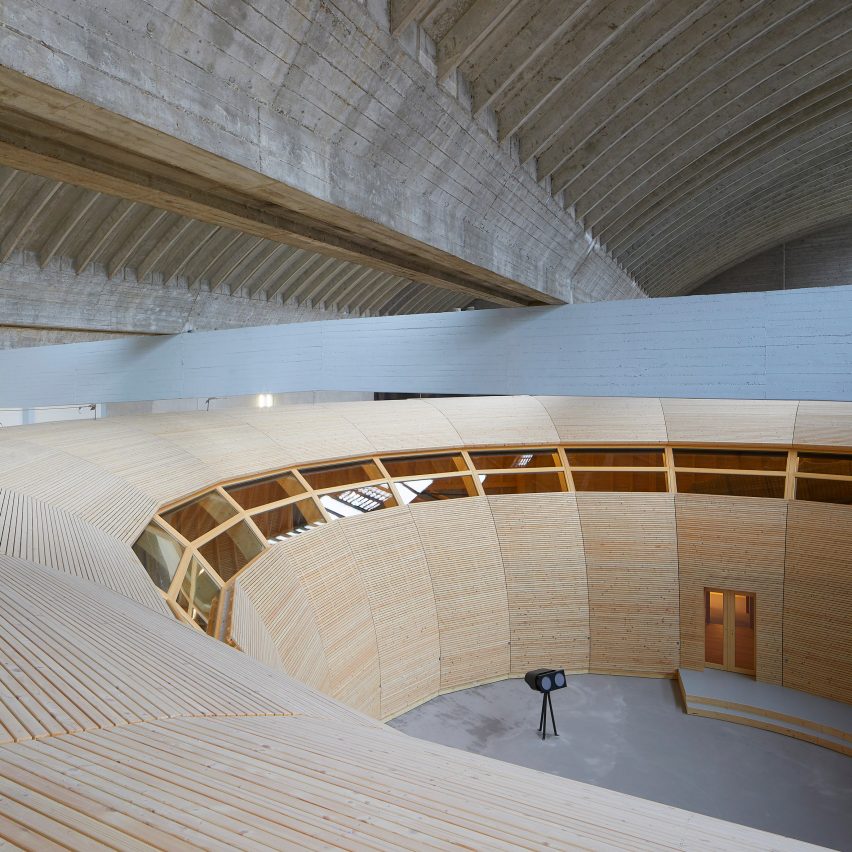 A doughnut-shaped timber “ark” filled with animal sculptures sits at the centre of the recently opened ANOHA children’s museum at the Jewish Museum in Berlin.

Architecture studio Olson Kundig designed the museum, which is an addition to the Daniel Libeskind-designed Jewish Museum Berlin, to be a space for “discovery, exploration and play”.

Set opposite the existing museum’s building, ANOHA was built within a brutalist former flower market. The architect’s concept aims to use the story of Noah’s ark as an accessible way of understanding issues of climate change.

Originally called Arche Noah – Noah’s ark in German – the name was changed to ANOHA to be easier for visitors of all ages to pronounce.

The 1960s concrete market hall was left largely untouched, with a contrasting timber structure inserted within the concrete frame.

“The 585-square-meter ark is inspired by two seemingly disparate sources: an ancient Sumerian text that describes a circular ark, and Space Station V, a ship from Stanley Kubrik’s film 2001: A Space Odyssey,” said the studio.

“The warm, curvilinear ark offers a softening counterpoint to the rectilinear brutalist structure of the existing hall, while the structural ribs within the ark echo the concrete ribbing that frames the skylights overhead.”

Before entering the ark, an immersive space designed by artist Wolfram Spyra evokes the feeling of being underwater through a series of educational exhibits, representative of the story of the flood from the Torah.

This leads into the ark itself, where a variety of different spatial conditions have been created using ramps, steps, interactive displays and play spaces, addressing everything from biological life-cycles to the design of flood-resistant homes.

“We designed ANOHA through the lens of a child’s experience, allowing them to engage with important cultural issues in creative, age-appropriate ways,” said design principal Alan Maskin.

More than 150 animal sculptures that are dotted throughout the space, were created by 18 German artists using repurposed and recycled everyday items.

These sculptures can be “fed”, “groomed”, and even produce “waste” in the form of coloured balls which can be used to “fertilise” the accompanying plant sculptures.

Clerestory glazing on both the interior and exterior walls of the doughnut shape draws in light and frames views of the concrete structure outside.

Doors lead out into the centre of the ark, where an open space surrounded by low platforms can be used for gatherings and events.

Ventilation and lighting within the ark have been designed to work in tandem with the existing structure, which features openable louvres within its curved roof sections that open and close depending on air temperature.

Photography is by Hufton + Crow.