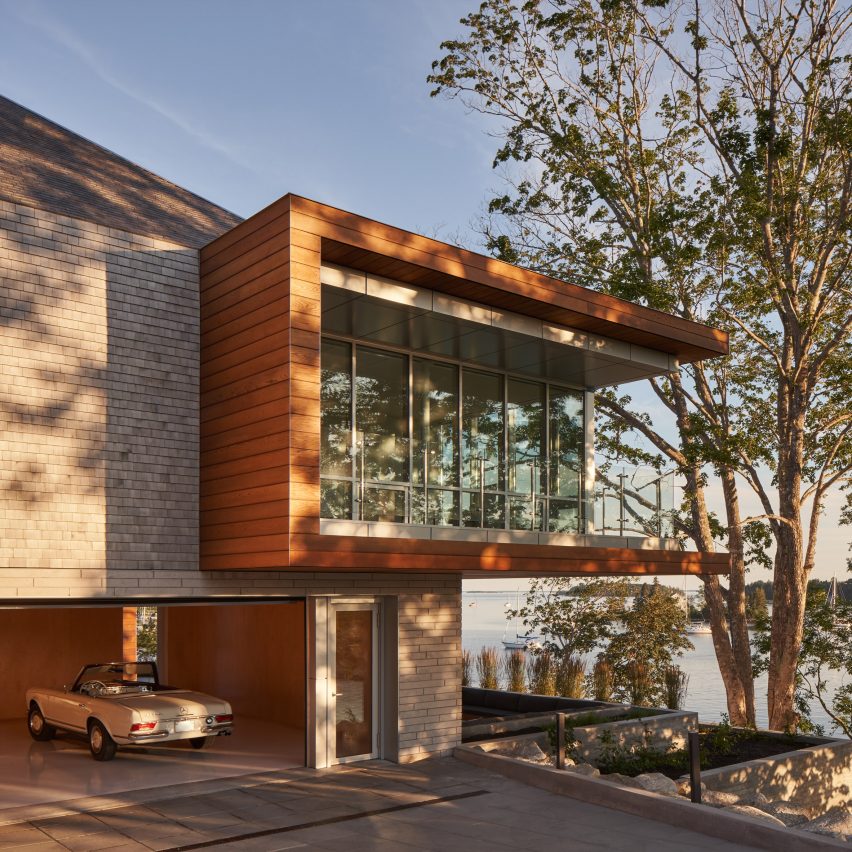 Jib House’s name was derived from the coastal site’s triangular shape, which resembles that of a jib, a slender triangular fore-sail used on a traditional sailing boat.

According to Omar Gandhi Architect founder, Omar Gandhi, the clients wanted a home that took advantage of the slender waterfront site while still providing plenty of space for their growing family and for large get-togethers.

The six-bedroom home spreads out along the waterfront. Its roof and the pale eastern white-cedar cladding are indicative of typical coastal architecture in Nova Scotia, while cantilevered shadowboxes clad in red cedar add a modern touch.

“The parti of the house is a kit of red cedar-clad lenses of different sizes and proportions, which slide into the primary gable form clad almost entirely in eastern white cedar, the most ubiquitous of regional vernacular forms,” Gandhi told Dezeen.

“These lenses provide unique views of both the foreground and distant landscape from critical social zones of the house.”

Indiana limestone clads the base of the home while board-form concrete walls twist through the landscaping, leading to a hot tub and a pool. An adjacent pool house has a low, sleek envelope and water-facing, operable window-wall.

Clad in the same red cedar as the shadow boxes, the pool house includes a sauna and wood-burning stove.

The main structure has two storeys that follow the steep slope of the site.

“A long and bent form allowed for unique views from each of the house’s main spaces,” said Gandhi.

The home’s top-floor entrance leads into a glass-lined entryway that Gandhi described as a “compression zone”, where a glass balcony overlooks the living areas.

Five bedrooms are all accessible from this level, two of which have red cedar-clad window boxes that hold terraces.

A central spiral staircase connects the two floors and was made of solid wood crafted with a 5-axis machining, a process that uses computer numerical control (CNC) to cut the wood from five angles at once.

In the primary living room, double-height floor-to-ceiling windows let in the light and a large stone-clad fireplace decorates the centre of the room.

Behind the fireplace are a dining room and kitchen, which lead to the sixth bedroom. 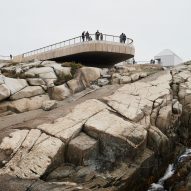 The studio chose a muted colour palette resembling the exterior for the house’s interiors, with limestone and cedar finishes repeated throughout.

A terrace wraps around the common spaces and a sunken conversation pit was placed over the cantilevered red-cedar window box on one end. From here, the landscape steps down with a series of retaining walls to the pool below.

A preexisting dock was utilised to connect the new building to the water.

Other projects by Omar Gandhi Architect include a home built for the founder in Halifax and a restaurant in Toronto for celebrity chef Matty Matheson.

The photography is by Adrian Ozimek. The video is by ThreeSixFive Media.