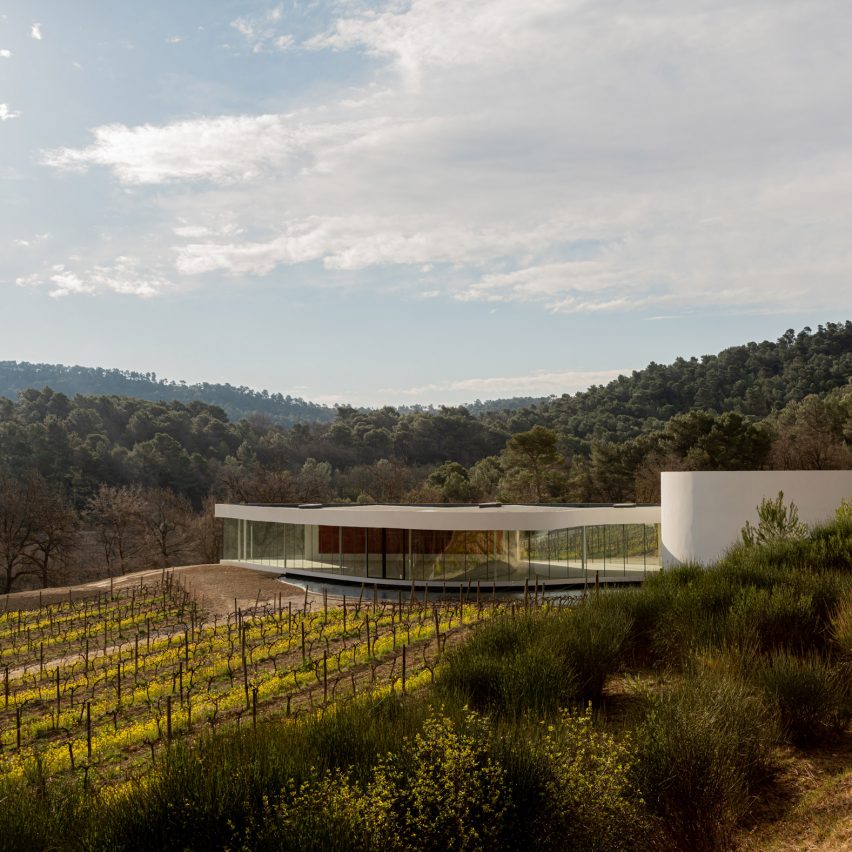 A pavilion designed by the late Brazilian architect Oscar Niemeyer has opened at the Château La Coste vineyard in southern France.

Designed in 2010, two years before Niemeyer’s death aged 104, the curved white pavilion was created to sit comfortably within the landscape.

“The location is very beautiful and a pleasant, peaceful environment,” said Niemeyer while designing the project.

“The pavilion had to be a light construction adapted to the landscape as well as the vegetation. The structure is at home in this setting and will be a joy to walk around.”

Surrounded by vineyards, the pavilion consists of two distinct elements – a glass-walled gallery space and a cylindrical auditorium.

A pool alongside the pavilion was designed to reflect its form.

“The pavilion, with its organic, curved architecture reflects Niemeyer’s distinctive style and sits in perfect harmony with the surrounding vines and rolling Provençal hills,” explained the Château La Coste vineyard.

“The striking glass facade gives the impression of the vineyard unfolding through the building, while the shallow pool at the entrance beautifully captures the interaction of light and reflection.”

The 380-square-metre gallery space is surrounded on all sides by glass walls, with views across the surrounding vineyards.

Alongside it, the fully enclosed 140-square-metre auditorium has seats for 80 people.

Pritzker Architecture Prize-winning Niemeyer is one of the 20th century’s most celebrated architects. He is best known for his design of Brazil’s capital Brasília as well as the headquarters of the United Nations in New York.

The pavilion is one of the numerous buildings designed by Niemeyer in France where he lived for almost 20 years. 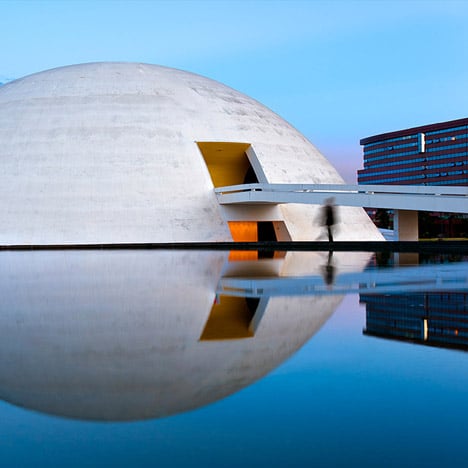 “Niemeyer had a long and faithful relationship with France. During the Brazilian military dictatorship, he went into exile in Paris and lived on Boulevard Raspail,” said Château La Coste.

“Even after returning to Rio de Janeiro, he always said that he would only leave his home city for Paris,” it continued.

“Over his lifetime Niemeyer developed several projects in France, among them: the Communist Party HQ, L’Humanité newspaper HQ, the Cultural Center in Le Havre, the Labor Council Building of Bobigny and a private home in St Tropez.”

Photography is by Stéphane Aboudaram / We Are Content(s).