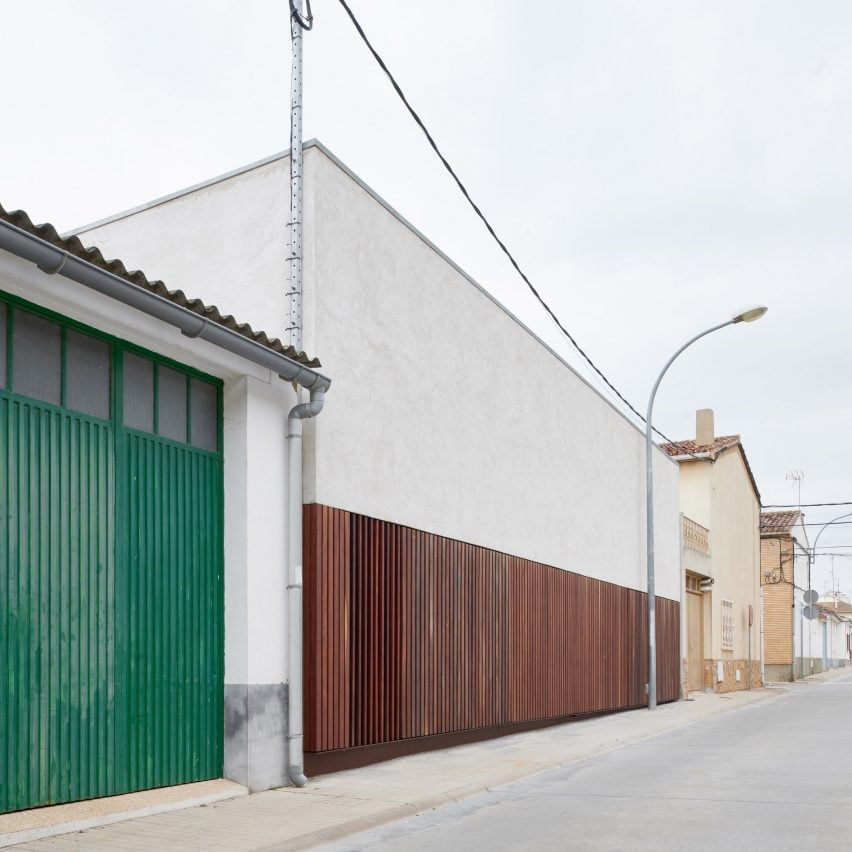 An austere exterior conceals a series of living spaces around a central courtyard at this home in the Spanish town of Citruénigo, designed by local studio Lecumberri & Cidoncha and architect Ińigo Beguiristain.

Occupying a plot surrounded by low-rise homes, LR House was designed in response to a simple brief for a one-bed, single-storey dwelling.

Lecumberri & Cidoncha and Beguiristain‘s design for the inward-facing home centres around a paved courtyard with a drain at its centre, which was modelled on a Greco-Roman impluvium – a sunken basin in a home designed for collecting rainwater.

“Illuminated by the evocative image of the Roma impluvium, the project is inevitably structured around a courtyard, a void that replicates and regularises the autonomous geometry of the original site,” said the architects.

“The strategy is based on the negation of the area, with a subtly muted facade and the vindication of the new architecture to provide interest and environmental quality to an introverted dwelling that looks at itself,” they continued.

Pushing all of the LR House’s ancillary spaces to its corners, three sides of the courtyard are lined with sliding glass doors connecting to a bedroom, kitchen and living room.

Along LR House’s eastern edge, a pair of wooden doors are concealed in the lower, slatted wood section of the facade. This creates an opening to the courtyard from the street beneath the facade’s upper section, which is covered in rough plaster. 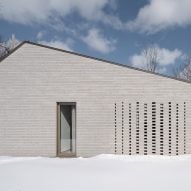 “A clear structure, as suggested by [Louis] Kahn, establishes a clear hierarchy for the different uses of the house,” described the architects.

“The movable walls of glass and wood animate the continuous succession of spaces, open and closed, covered or not, in which the limits are definitely diluted when the courtyard occasionally opens onto the street and introduces the village into the house.”

LR House is topped by a standing seam zinc roof that channels water into the central courtyard, extending downwards to wrap the upper portion of the internal elevations.

The brick surface of the courtyard extends into the living spaces where it is used for the floors and walls, contrasted by dark wooden fittings.

Other projects by Beguiristain in Spain include a concrete kindergarten near Pamplona, which features classrooms and playgrounds wrapped by a row of colourful louvres.

Courtyards are a popular feature of many one-off homes, with other recent examples including a pale brick home near Montreal by Dupont Blouin and a home organised around a hexagonal courtyard in rural Massachusetts by No Architecture.

The photography is by Iñaki Bergera.