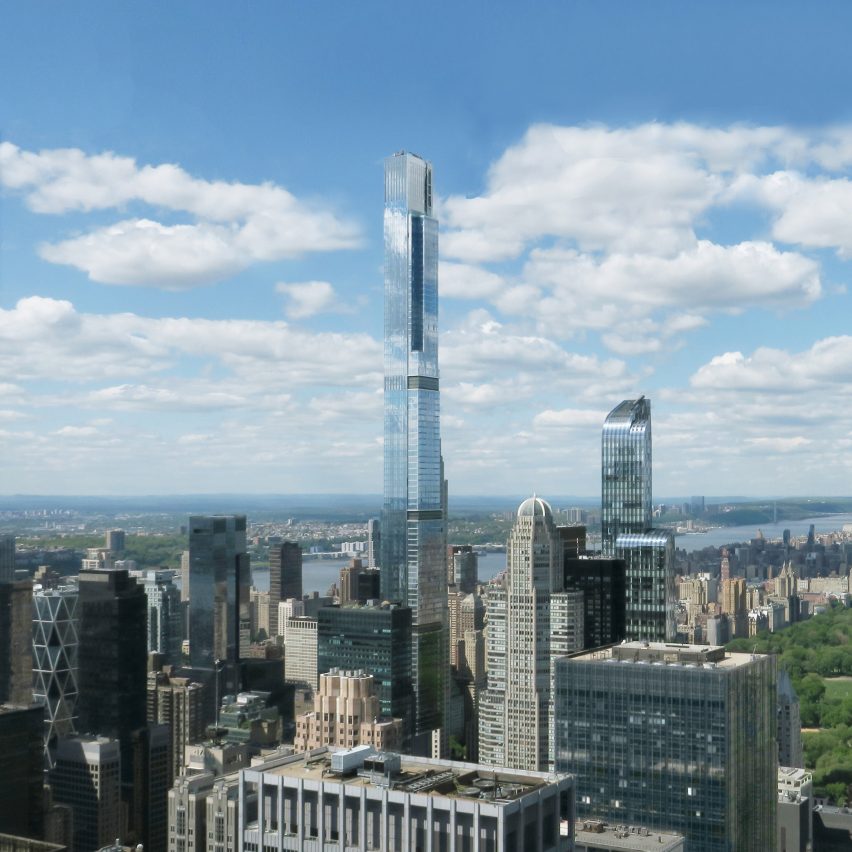 The 1,550-foot (472-metre) apartment building by architecture firm Adrian Smith + Gordon Gill topped out in Manhattan in September 2019 and is expected to officially complete later this year.

Chicago-based Adrian Smith + Gordon Gill designed the tower at 225 West 57th Street, which is just blocks away from Central Park, for Extell Development.

They also show the cantilever on the eastern side of the tower, which Adrian Smith + Gordon Gill added in order to maximise views of Central Park for its residents.

The supertall skyscraper has 179 residences arranged from the 32nd floor upwards.

Its largest apartments have eight bedrooms and over 17,500 square feet (1,626 square metres) of floor space.

Some of the apartments, which have interiors by Texas firm Rottet Studio, have double-height ceilings. Facilities will include access to a private members club, swimming pools, a cigar bar and a grand ballroom.

In addition to the residences, Central Park Tower will also have a hotel, while a Nordstrom department store is located at the base of the tower.

The supertall skyscraper is on West 57th Street, an area colloquially dubbed Billionaire’s Row due to the expensive apartment buildings cropping up along the southern edge of Central Park.

When Central Park Tower topped out, it took the title for the world’s tallest residential building from its neighbour, Rafael Viñoly’s 432 Park Avenue.

Viñoly’s tower, which rises to a height of 1,398 feet (426 metres), has reportedly had problems with residents complaining of flooding and getting trapped in the lifts during high winds.

Clemence’s photos also show 111 West 57th by SHoP Architects, a neighbouring supertall skyscraper that is also due to complete in 2021.

Adrian Smith + Gordon Gill is the practice behind Jeddah Tower in Saudi Arabia, which could become the world’s tallest building, although it has no completion date yet.

Clemence recently photographed The Spiral by BIG, a supertall skyscraper that topped out earlier this year in Hudson Yards.

Photography is by Paul Clemence.