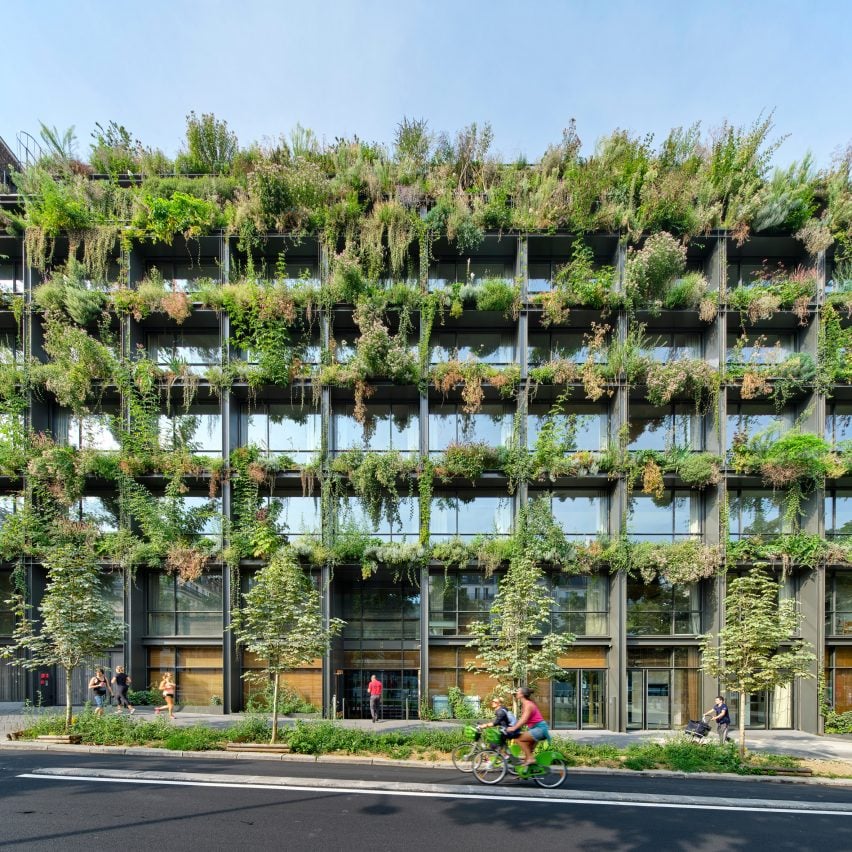 A steel exoskeleton supports a vertical garden facade at this hotel in Paris, France, designed by French-Brazilian studio Triptyque in collaboration with designer Philippe Starck and landscape studio Coloco.

Located in Montparnasse, the 8,000-square-metre hotel also contains a restaurant, co-working space, gym and rooftop bar, which the team said all focus on healthy living and a desire to “bring nature back to the city”.

Expressing this concept, the entire exterior of the building is covered by a framework of deep black steel beams, planted with trailing plants that spill over its edges and frame views out of the hotel’s bedrooms.

“We designed Villa M as a naturalist architectural manifesto: that is, a building of a new era, where man is no longer opposed to nature and the living,” said Olivier Raffaëlli and Guillaume Sibaud, partners at Triptyque.

“The edifice itself is the support for this vertical garden, which will grow and occupy the entire facade, turning the building into a vertical, medicinal forest, and becoming the main architecture,” Raffaëlli and Sibaud continued.

Villa M’s entrance leads directly into a lounge and restaurant space with an open kitchen, which provides access to a dining terrace at the rear of the building planted with fig trees.

“Upon entering, the visitor is plunged into a city of live energy and benevolence, an agora made of wood and concrete, vegetation, a friendly welcome, an open kitchen, all surrounded by a luxuriant terrace with trees,” said the studio.

“Throughout the restaurant and the bar, fertile surprises, hidden places and mental games arouse curiosity and guide the gaze of visitors, reminding them that intelligence is one of the most beautiful symptoms of humanity,” added designer Starck.

A basement level below contains hireable conference and meeting spaces, while two floors above house 20 “open offices” and co-working spaces alongside a gym with a boxing ring and yoga rooms.

The block’s four uppermost storeys contain the hotel, which comprises 67 rooms and six suites that are designed as “enveloping and relaxing cocoons”, with many opening out onto greenery-filled balconies or terraces. 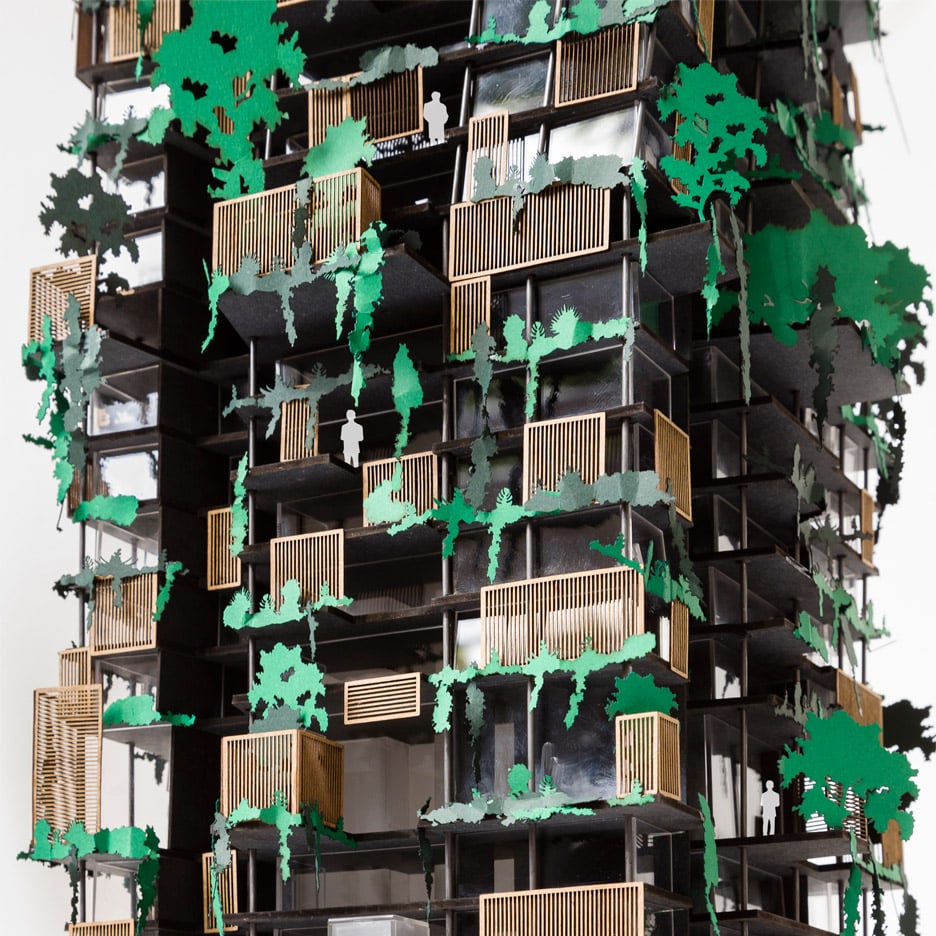 Finishes in all of these interior spaces are guided by a concept of natural simplicity, with concrete ceilings and columns contrasted by pale wooden panelling and floors.

A palette of warm, earthy colours and durable materials defines the hotel furniture and fixings. This includes the larger Pasteur Suite, located at the corner of the seventh floor, which features bay windows and a double terrace.

“The traveller must feel at home, in calm, soft, and maternal rooms, pleasant to live in, so that the human being is always at the heart of the Villa M concept,” said Starck.

At the top of the building is a rooftop bar, described by Tryptique as a “suspended oasis” offering views out across Paris among fruit trees and plants.

Triptyque was founded in 2000 by Greg Bousquet, Carolina Bueno, Sibaud and Raffaëlli. Other recent projects include the Tropical Tower, a proposal for a plant-covered skyscraper in São Paulo.

It previously collaborated with Starck on TOG’s first showroom, which is designed to be as customisable as its furniture.

The photography is by Michael Denancé unless stated otherwise.

The post Plant-covered Villa M by Triptyque and Philippe Starck "brings nature back to the city" appeared first on Dezeen.