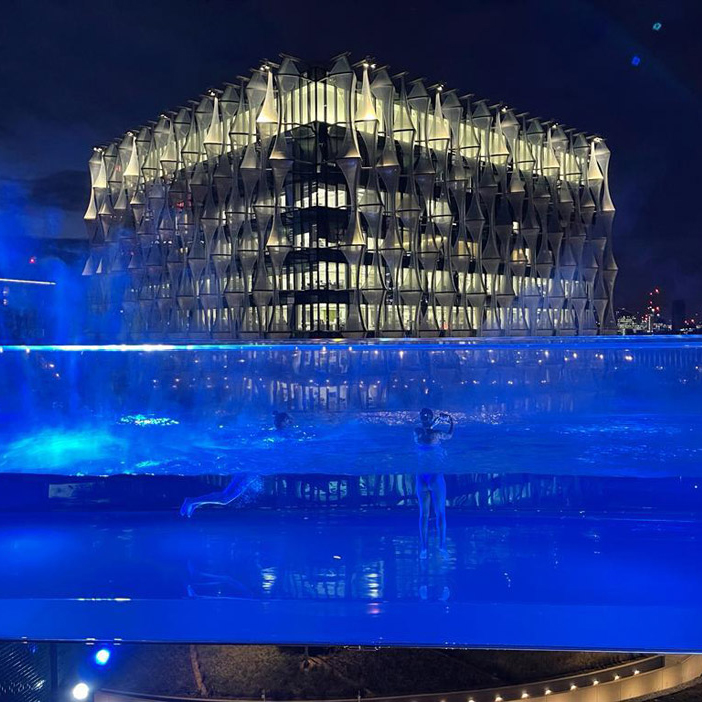 Residents at the Embassy Gardens development in southwest London claim its controversial Sky Pool is too cold to be used in winter, despite heating costs of £450 a day.

There are calls for the transparent swimming pool, which is suspended 35 metres in the air between two buildings, to be closed during the colder months to save money and energy.

“We are livid,” said one Embassy Gardens leaseholder, who did not wish to be named.

“The outside temperature has obviously dropped, but the Sky Pool is still open to residents and currently uncovered. We’re basically heating the sky.”

Dezeen has heard from three separate residents that the Sky Pool is now only being used by a small handful of people, though the developer of Embassy Gardens, Ballymore, said that the pool area was accessed more than 100 times in the last week.

“It costs roughly £450 a day to heat that pool before adding the costs for two staff including a security guard,” the resident added.

“It’s also only being used now by a handful of residents because the water’s actually quite cold.”

Ballymore’s running cost estimates for the Sky Pool put the total figure at £720,000 for 2021 including £164,250 for heating, with residents footing the bill via service charges. 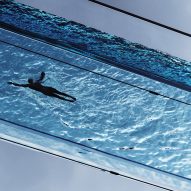 “The water was barely warm enough to stay in the water for more than 5-10 minutes, even at the far end where the warm water jets are,” a recent post on an Embassy Gardens residents’ Facebook group said.

“Not that I’d normally rush to swim in an outdoor pool 13 floors up in the winter… but it’s been billed as a year-round facility that we’re paying to be open and staffed by two people.”

The pool is usually covered at nighttime to mitigate heat loss but has been left uncovered for the past fortnight after the cover became damaged and was removed for repairs.

It’s understood that the Embassy Gardens Residents Association plans to ask Ballymore at their next meeting to close and cover the Sky Pool for the rest of winter, with the water warmed just enough to prevent freezing.

Energy prices in the UK are set to rise dramatically next year amid record wholesale costs for suppliers and the raising of a government-enforced cap on bills, meaning that heating the pool could be even more expensive in 2022.

The Sky Pool gained huge attention after being launched in June, as aerial footage of it being enjoyed by residents on a hot, sunny day went viral.

But the facility came in for heavy criticism over the fact that affordable housing residents at Embassy Gardens are not allowed to access it, with the Financial Times’ architecture critic Edwin Heathcote branding the Sky Pool “a disaster that’s already happened”.

Architecture studio HAL, which designed the Sky Pool and claims it to be a world-first, previously told Dezeen it wanted to provide “a swim like no other”.

“The Sky Pool remains a popular amenity for residents during colder periods, including having been used more than 100 times in the last seven days alone,” said a spokesperson for Ballymore, which also manages the development.

The spokesperson subsequently clarified that this figure is based on the number of times the pool terrace has been accessed.

Some Embassy Gardens residents have expressed unhappiness with the quality of services at the development in the context of rising charges – which now stand at £6,500 a year for a two-bedroom flat, with that money going towards the running of the Sky Pool as well as other facilities including a separate indoor pool. 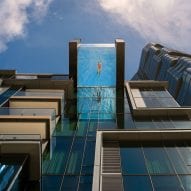 “Independent analysis of service charges across our London estate found that Ballymore service charges are competitive, represent good value for money and are, in the vast majority of schemes, in line with or better than market comparables – including at Embassy Gardens itself,” the Ballymore spokesperson said.

HAL did not respond to Dezeen’s request for comment.

Masterplanned by UK architecture studio Farrells, the 15-acre Embassy Gardens estate is in London’s Nine Elms district which has seen massive development activity over recent years and includes the Kieran Timberlake-designed US Embassy.

The photography is by Shelley Montez.