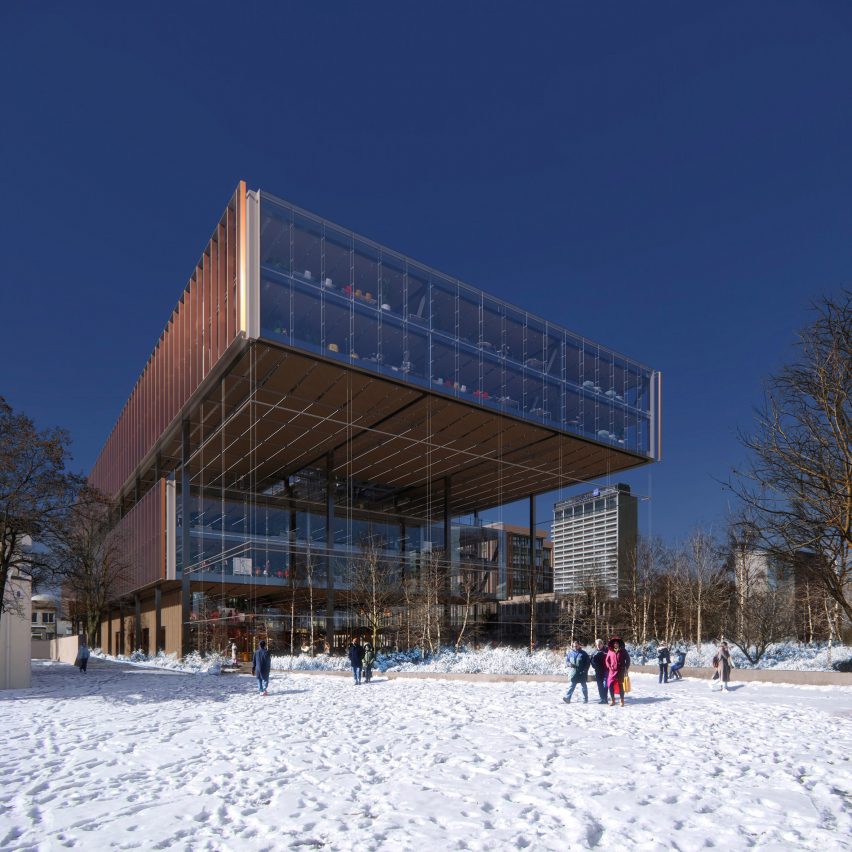 UK architecture studio Rogers Stirk Harbour + Partners has revealed designs for an office block in Vilnius that will be cantilevered over a new square.

Located on Konstitucijos Avenue on the south bank of the Neri River alongside the city’s planetarium, the seven-storey business centre will contain 16,000 square metres of office space.

The upper slab will project out from the building to cover a public plaza, designed by landscape architecture studio Gillespies, below. 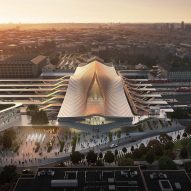 The studio designed the building to combine the workspace with public space.

“We have worked closely with the engineers and landscape architects to create a modern and environmentally conscious workspace that engages with the surrounding city, brings public space into the heart of the new workspace and creates a new location that focuses on nature and wellbeing,” said Jack Newton, associate partner at Rogers Stirk Harbour + Partners.

A “covered public street” flanked by cafes and shops, which will be open to the public, will run the length of the ground floor of the block.

Six floors of office space will be located above this, arranged around a large sky-lit atrium crossed by platforms and containing wide stairs.

The building will be topped by a series of roof gardens.

The steel and glass building will have its structure clearly visible on the exterior and will be wrapped in a “hybrid double-skin facade” that incorporates automated solar shading.

Overall Rogers Stirk Harbour + Partners hopes that the building will integrate with the surrounding buildings that were built in a variety of styles.

“The site for our building reflects this heterogeneity with the buildings on each of the four boundaries pertaining to different eras in the evolution of the City. Our design aims to meld these diverse contexts together shaping a route between the old Vilnius and the new.”

Recent projects revealed by the studio include a Kentucky distillery and a terminal for an airport in Shenzhen.

The images are courtesy of Plomp.