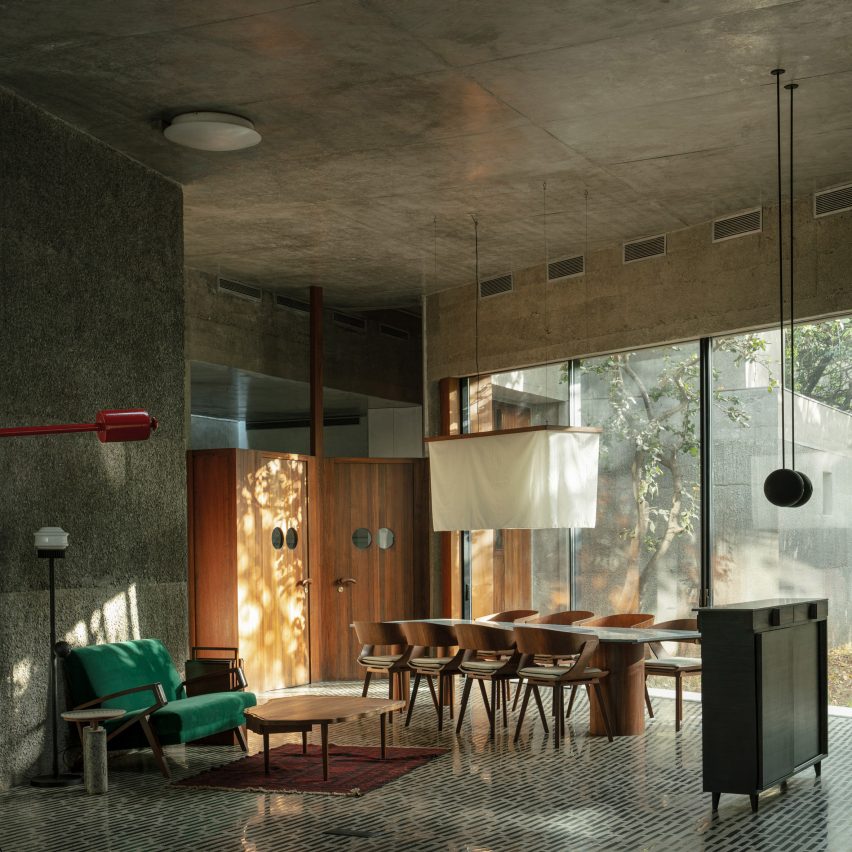 Sculptural concrete walls cast with debris and a range of finishes define this home in the coastal town of Alibag, India, designed by local studio Samira Rathod Design Atelier.

Named the House of Concrete Experiments, the dwelling has a fragmented form that prevented the removal of any of the mango trees on the site during construction.

The residence is characterised by its concrete walls, described by Samira Rathod Design Atelier as “sculptural elements”.

Cast from waste acquired from the site, these walls range in thickness from 450 to 1000 millimetres and have contrasting pigmentations and textural finishes.

“The debris includes stone chips, broken bricks and at times large pieces of waste stone embedded in the walls almost like a relic,” said the studio.

“Different experiments in concrete render specific textures to each of the walls, including cast concrete and waterjet concrete.”

The House of Concrete Experiments is organised around a large and high-ceilinged space at its centre that contains a living room, dining area, bar and study.

Here, a concrete floor inlaid with black stones is contrasted by a smooth concrete ceiling with geometric skylights and roughcast walls that frame a seating area and niches for sculptures.

To the west, this central space opens onto an external deck that leads down a staircase and into a sunken, shaded terrace with a swimming pool.

Similarly to the home’s other entrances, the deck is shaded by a large sloping concrete cantilever.

On the east, two small forms extend out from the central space. One contains the home’s main bedroom and bathroom and the other houses a room and storage for staff.

A stand-alone two-storey block that accommodates a two-bedroom guest annexe sits on the north side of the site, accessed via a paved path from the main home. 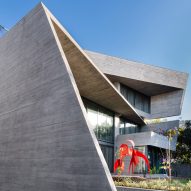 Beton Brut is a "neo-brutalist" concrete house in Ahmedabad

The thick walls have also been used to aid the ventilation strategy, with small ducts inside them carrying cool air through the home.

“The house is one that is not easy to photograph. Its spaces need to be encountered and experienced,” the studio added.

Previous projects by the studio include a terracotta-coloured school building in Gujarat and a concrete house in western India with a weathered steel roof.

The photography is by Niveditaa Gupta.